Kirk Heinz and his son Andrew organized numerous vaccine clinics and even administered vaccines in Puyallup and Tacoma. Now, they're being recognized for their work. 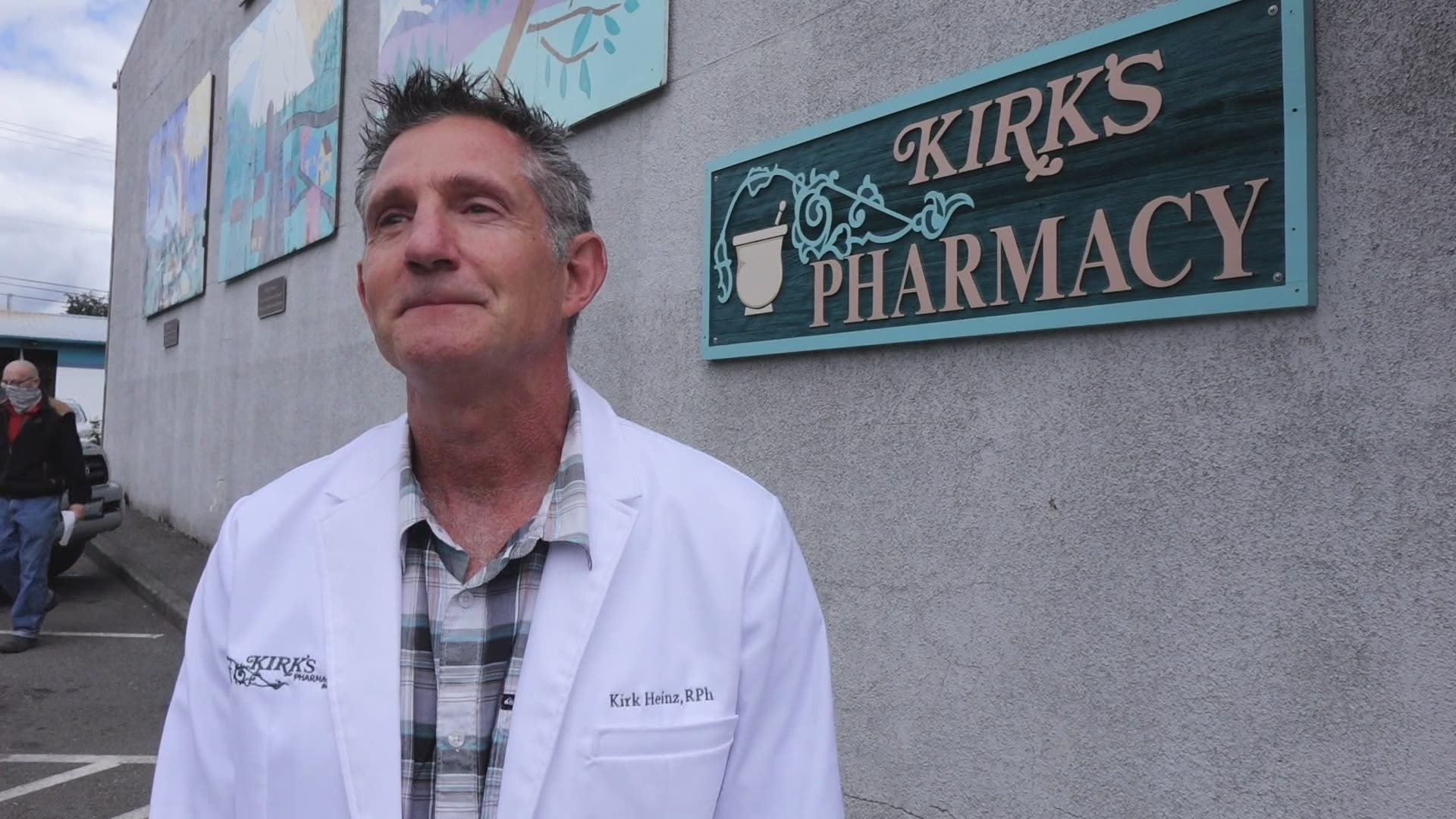 EATONVILLE, Wash. — “Hometown Hero” is just the latest title Kirk Heinz is adding to his resume.

Heinz has held just about every public office in Eatonville.

“From the Chamber of Commerce to county council to the school board and even mayor,” he said.

Now, Heinz is being celebrated for going above and beyond during the pandemic as the longtime owner of Kirk’s Pharmacy in Eatonville, working alongside his son, Andrew.

The pair have led a team over the past 6 months that coordinated and distributed over 22,000 doses of the COVID-19 vaccine. An especially impressive feat for a pharmacy that serves a town with a population of fewer than 3,000 people.

Kirk Heinz said the rollout was overwhelming to start, as people from all over came to his pharmacy looking for the shot.

"We had people camping outside overnight when we started. Traffic was backed up five miles outside of Eatonville," he said.

The pair's vaccine rollout only grew from there. They organized numerous mass vaccination clinics at local schools, worked closely with the Eatonville school district, and even traveled to Tacoma and Puyallup to distribute doses.

Kirk Heinz said they couldn't do it without the volunteers who make the clinics run so efficiently.

"Without our nurses and everyone volunteering to make an impact, make a change in the community, we couldn't have done it without them," Kirk Heinz said.

People from as far as Eastern Washington and Portland, Ore., have come to Kirk's Pharmacy to get their vaccine. Kirk Heinz believes that's in part because Andrew Heinz made their website so easy to use.

Andrew Heinz said it's an example of how a small-town pharmacy can lead in a time of crisis. He said he's proud to prove how impactful independent pharmacies can be nimble and are able to pivot faster than major chains.

“It’s really the little guys that can turn on a dime and adapt. As the owners we make the decisions so if we want to do something… the next day it’s getting done,” he said.

The rush for vaccine appointments has certainly slowed at Kirk’s Pharmacy and they continue to focus on educating their community whether people choose to get vaccinated or not.

"We do what needs to be done, we go where we need to go, and I think the thing that sticks to my heart the most is that our local physician here in Eatonville for MultiCare commented that, I think she's only had to send one patient to the hospital for COVID and she's not lost any of her patients, and I think that, that sure makes me feel good," Kirk Heinz said.