How Spokane hospitals are impacted by North Idaho's COVID-19 crisis

Twenty-nine of Sacred Heart's inpatients last week were from Idaho and the number of patients sent to the ER from Kootenai Health also increased in August. 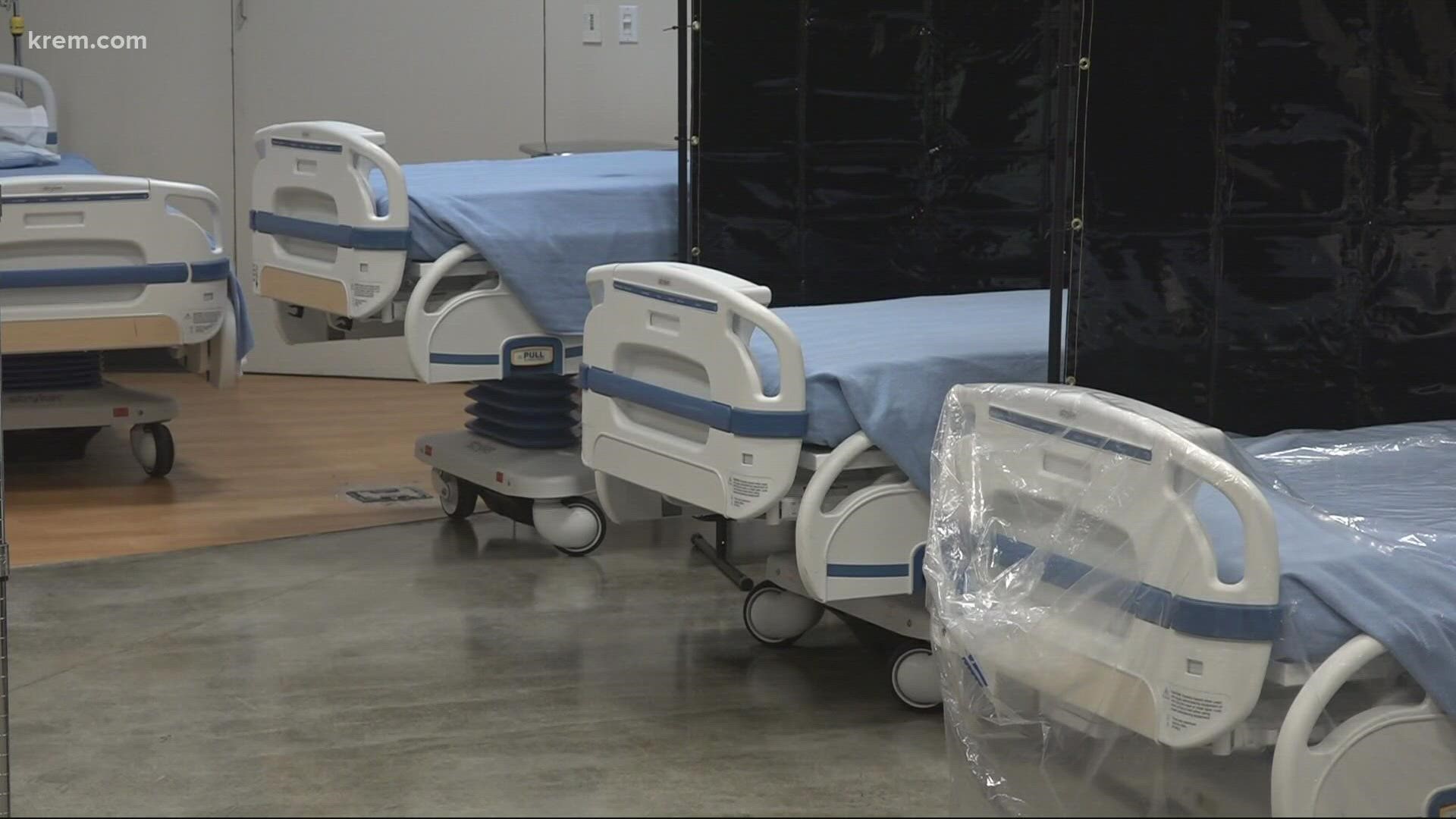 SPOKANE, Wash. — Some Spokane hospitals are coming to the aid of health care facilities in the region, taking patients from across the border in North Idaho as its own hospitals remain in crisis.

The impact of the coronavirus surge in North Idaho has reached the New York Times. In a report published by the newspaper on Monday, Providence Sacred Heart Chief Medical Officer Dr. Daniel Getz said he and others have seen "increasing calls for help from all over Northern Idaho" at the hospital in Spokane.

The Idaho Department of Health and Welfare announced last week that Panhandle Health District and the Idaho North Central District entered into crisis standards of care because of “a massive increase in patients with COVID-19 who require hospitalization.” This means resources are stretched so thin patients can no longer expect the level of care they would receive under normal circumstances.

The Department of Defense has provided Kootenai Health, North Idaho's largest hospital, with a 20-person medical team that includes 14 nurses, four physicians and two respiratory therapists. Kootenai Health leaders also made the decision on Aug. 20 to convert the hospital's largest conference room in the Health Resource Center into a patient care area dedicated to COVID-19 patients. It can accommodate up to 22 patients, according to the hospital.

While Washington state is not yet operating at crisis standards of care, which is when hospitals must deny lifesaving treatment to one patient in order to give it to another, hospital officials said the state of the health care system is fragile right now. Washington State Hospital Association (WSHA) Executive Vice President Taya Briley said the state is doing everything it can to avoid crisis standards of care.

However, patients from the Idaho Panhandle are contributing to the strain on Spokane-area hospitals.

The New York Times reported that 29 of Sacred Heart's inpatients last week were from Idaho. Officials added that the number of patients sent over to the emergency room from Kootenai Health was up 34% in August. Ariana Lake, a spokesperson for Providence, also confirmed this information to KREM on Monday.

In a joint press conference with Spokane County health care providers on Friday morning, Providence's Chief Operating Officer (COO) said Sacred Heart and Holy Family Hospital were caring for their highest number of COVID-19 patients since the pandemic began. As of Friday morning, 150 patients with COVID-19 are hospitalized at Sacred Heart and Holy Family Hospital in Spokane, according to Currie.

According to the New York Times report, MultiCare has also seen a "substantial rise in calls for support from Idaho." However, both Providence and MultiCare have declined some of the requests due to capacity issues, the report says.

Kevin Maloney, a spokesperson for MultiCare, said the organization received 30 requests from Idaho's critical access hospitals in August. Due to capacity limitations, MultiCare could only accept 10 of them, Maloney said. MultiCare has also received requests from Colorado, Texas, Alaska and Oregon.

Washington hospitals absorbing some patients from Idaho has also led to "some ripple effect on western Washington," Briley said. And while Briley pointed out that level loading among hospitals is an everyday practice, Dr. Christopher Baliga, a Virginia Mason Franciscan Health infectious disease specialist, added that hospitals' capacity to take in out-of-state patients right now is "limited."

Providence has indefinitely paused some surgeries and procedures performed at Sacred Heart and Holy Family. The paused surgeries include those that can be delayed without harm or risk to a patient.  MultiCare hospitals in Spokane have also paused some elective surgeries amid the surge in coronavirus infections and hospitalizations.

The New York Times reports that the influx of patients has led to longer emergency room wait times for Sacred Heart, and those who do have a bed may not get a place in the intensive care unit as they normally would.

Dr. Getz addressed the delay in surgeries and procedures, including procedures to remove brain tumors and treat orthopedic injuries.

“We are delaying care for people who are in misery,” he told the New York Times. “It’s agonizing for those patients. This has real impacts on these people who are waiting.”