There are many other non-COVID-related factors that impact crime, but a burglary spike is something police were ready for, given that many storefronts are closed. 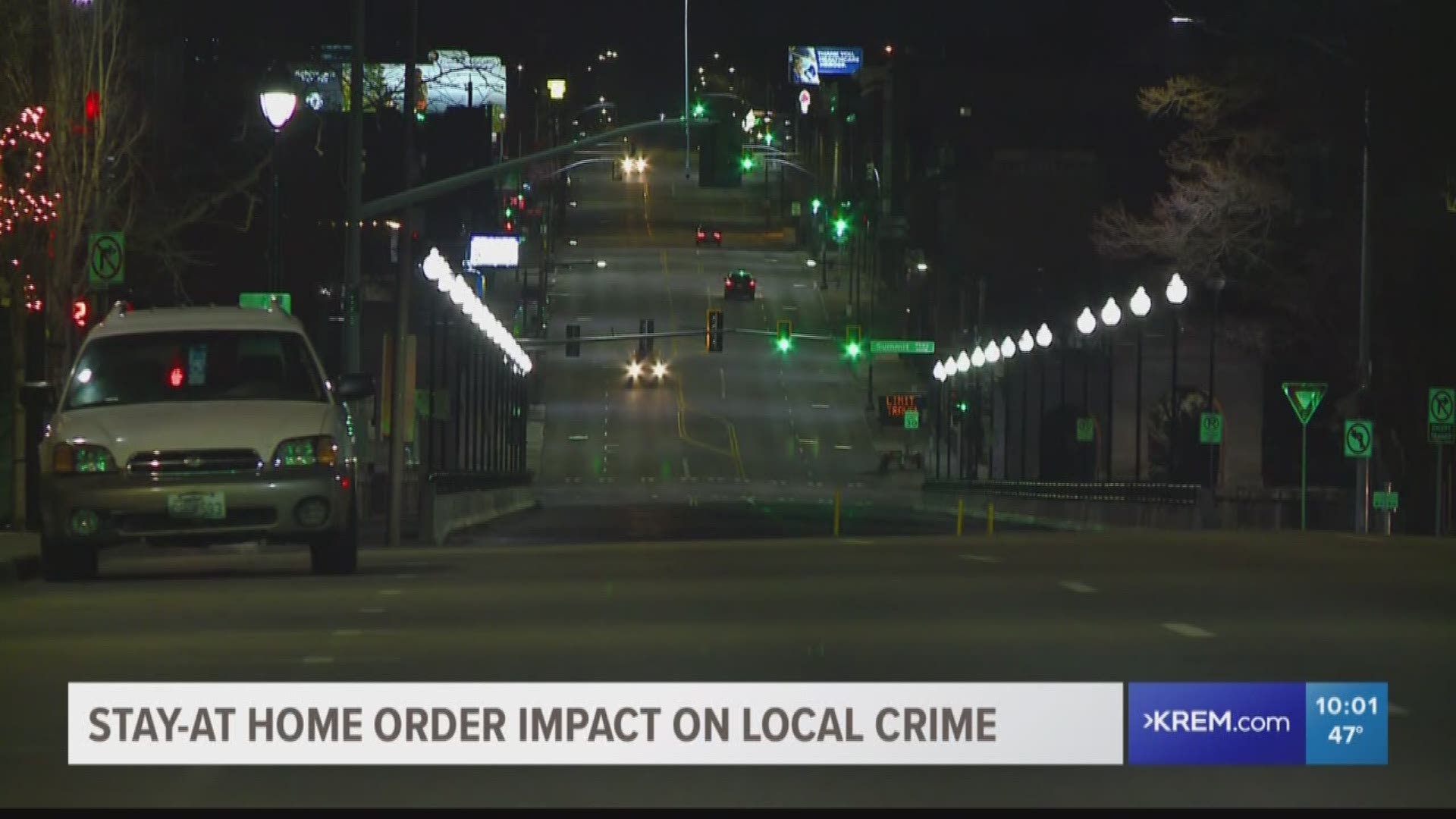 SPOKANE, Wash — For the first time, Spokane is seeing a clear data picture of how social distancing in Washington has affected the city's crime numbers.

The report released on Monday revealed a mixed bag, with crime in certain categories increasing when you compare the most recent 28 days to the 28 days prior, and decreasing in others.

Perhaps the most visibly stark change is a rise in burglary across the board. Residential and garage burglaries both rose by about 30% citywide and commercial burglary increased by nearly 50 percent.

There are many other non-COVID-related factors that impact crime, but a burglary spike is something police were ready for, given that many storefronts are closed and vulnerable.

"It's a logical assumption that it's having an impact," said Spokane Police Sgt. Terry Preuninger. "There's no way we can say that definitively yet, but we're obviously paying attention to it."

It's a big reason why officers have been spending more time patrolling those areas.

"A lot of [mission-based policing] is focused on places where, under the new circumstances we're all living under, [officers] know those places are more vulnerable and a lot of that's going to be the commercial properties," Preuninger said. "They've been having pretty good success in the last couple weeks. They've actually been able to prevent a few burglaries and catch some burglars in the act, or immediately following the burglaries."

On the other side of things, many violent crimes have gone down slightly, perhaps aided by a simple lack of people out and about coming into conflict.

Homicide, rape and commercial robbery are all down. Robbery and aggravated assault have seen nearly no change, but are up from the previous month by a few cases.

"I would've thought a lot of other crimes would have dropped more significantly in those first week, two weeks, where everybody was staying inside. And a lot of those numbers have actually stayed up," Preuninger said.

As for why that might be, there are a number of reasons. Chief among them, again, is a small sample size. Meaning, it only takes a couple of random events to cause what may seem like marked changes in the data.

"It's not that they don't matter, I'm not saying that there's not a correlation, but we see spikes because of our small subject sample size. We will see increases in the high 70, 80 percent sometimes, in different crime levels, that we can't articulate why," Preuninger said. "And then they drop right back to normal."

One type of violent crime that's increased by a few cases compared to last month is domestic violence. And even though there's not necessarily a confirmed correlation, it's something police and victims' advocates have been worried about, as abusers and their victims are required to spend more time together in isolation.

"They are very aware for the potential for increase there," Preuninger said. "I know that they have been, both from an education standpoint and a preparedness standpoint, plugging in and paying attention to that."

RELATED: Non-profit donates old cellphones to those in need