A member of the local group Stronger Together Spokane said he has asked police to investigate the memorial vandalism as a hate crime. 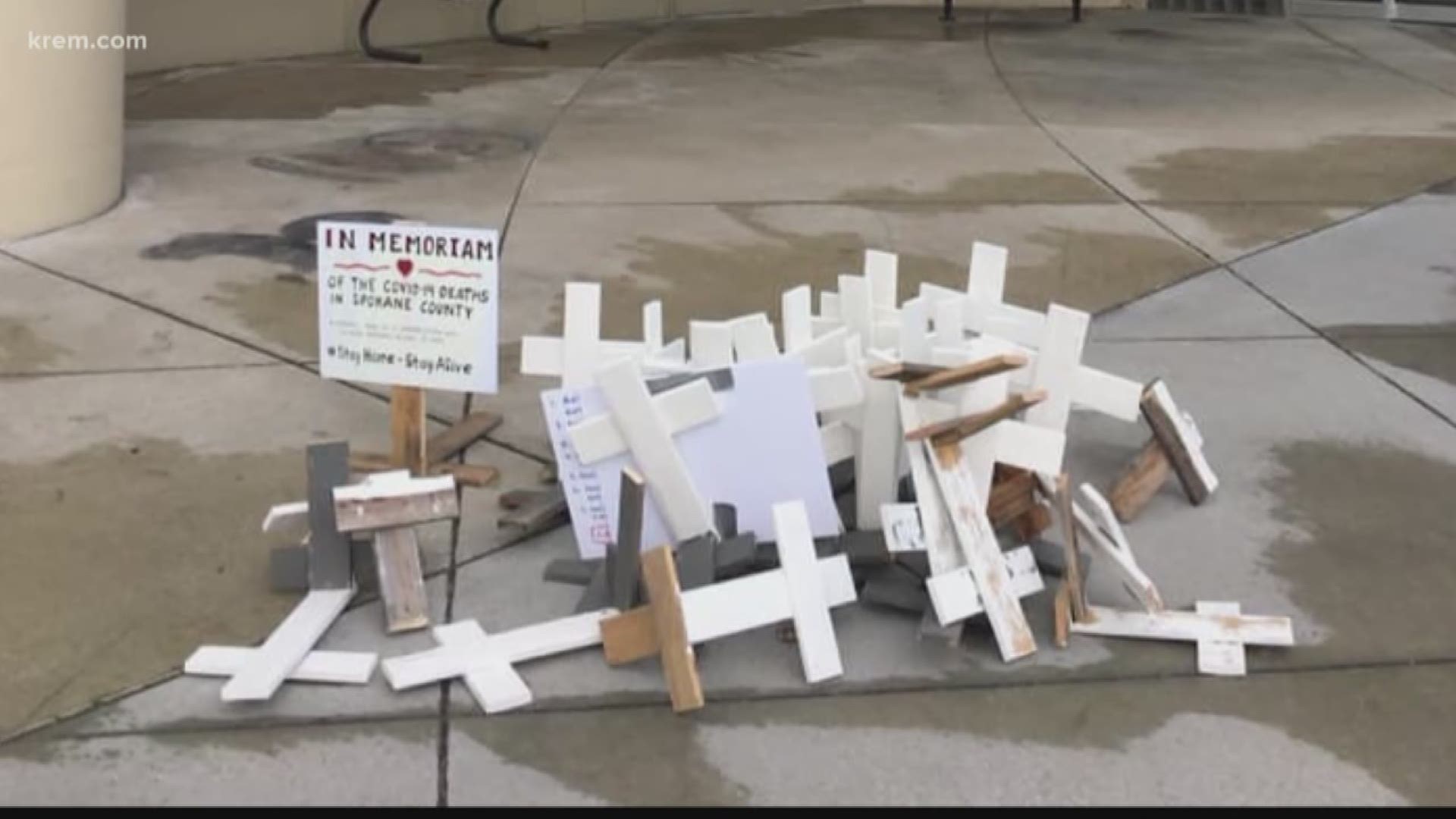 SPOKANE, Wash. — A local group rebuilt a memorial for victims of the coronavirus in Spokane County over the weekend after its was vandalized by protesters on Friday.

Thirty people have died among 396 confirmed cases of coronavirus in the county since the outbreak began.

Stronger Together Spokane, a group that works to oppose religious and political extremism, worked to display crosses for COVID-19 victims at City Hall in early May. Tom Robinson, who is a member of the group, rebuilt the memorial on Saturday following its vandalism.

"When you see these crosses, you realize that it wasn't just 29 or 30 people that died. It was people who were loved," Robinson said.

The group posted a video to Facebook on Sunday that shows members of the Proud Boys, who attended a protest in support of reopening local businesses in defiance of Gov. Jay Inslee's stay-home order, taking credit for vandalizing the memorial.

The Proud Boys are designated as a hate group by the Southern Poverty Law Center, though they adamantly deny connection to the "alt-right." The group regularly appears at protests alongside white nationalist groups, and is known for anti-Muslim and misogynistic rhetoric.

Robinson said he has sent a message to Spokane Police Chief Craig Meidl asking him to investigate the vandalism as a hate crime.

Spokane Police Sgt. Terry Preuninger told KREM on Monday that the police department has not yet received a report about the vandalism at City Hall.

RELATED: 'Tyranny is a disease': Hundreds of protesters gather at Spokane City Hall to push for reopening

In another video posted on Facebook, Proud Boys members and other protesters are seen mocking and harassing Robinson as he stands in front of the memorial. He repeatedly asks them to step away and respect his social distance.

“This is what Proud Boys do,” Robinson is heard saying in the video.

One of the Proud Boys members, who identifies himself as "Milkshake," said he came to the protest from western Washington. He and other protesters repeatedly tell Robinson in the video to remove his mask.

The video has been viewed 12,000 times since it was posted.

KREM's Brandon Jones reports that many people who attended the protest are members of the Reopen Spokane group on Facebook.

Brent Peterson, the owner of Cole's Coffee in Spokane Valley, spoke at the protest. He said his business reopened for indoor seating on May 4 in defiance of the stay-home order.

Embattled Spokane Valley Rep. Matt Shea, who attended a rally in support of reopening on May Day, also made an appearance at Friday's protest.