A witness told police that Christopher Herndon was walking around Sandpoint's City Beach park on May 16 "yelling and ripping 'Playground is CLOSED' signs." 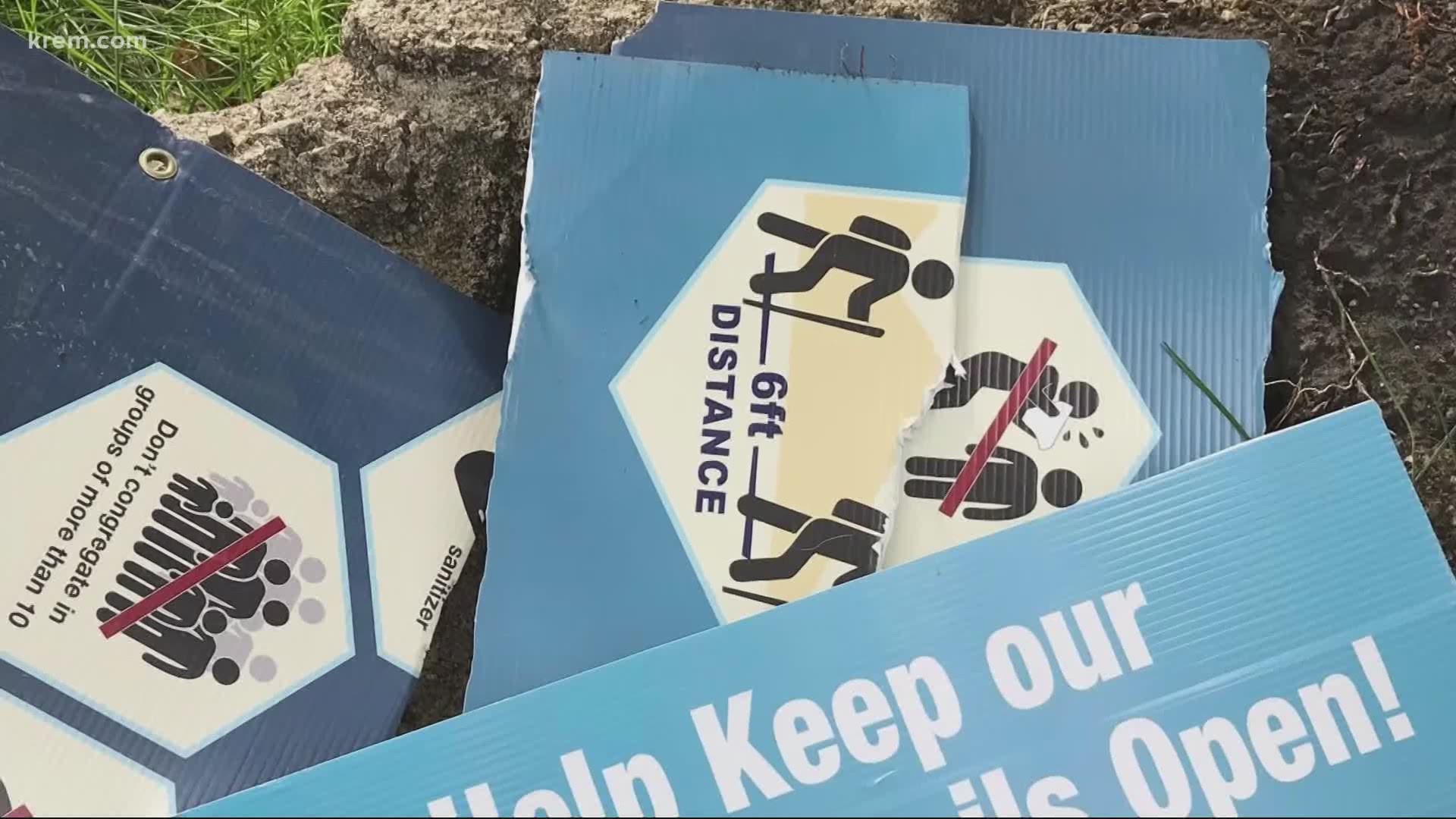 SANDPOINT, Idaho — A North Idaho man who admitted to destroying signs promoting social distancing at a Sandpoint park in May expressed some regret over his decision, but stood by his reasoning to take down the signs in the first place.

Sagle resident Christopher Herndon, 22, accepted a plea deal tied to the incident with prosecutors this month and pleaded guilty to a misdemeanor count of malicious injury to property.

According to court documents, a witness told Sandpoint police that Herndon was walking around Sandpoint's City Beach park on May 16 "yelling and ripping 'Playground is CLOSED' signs" off of park structures. Herndon later tore some of the signs in half and stomped on them, the witness said.

A responding officer wrote that Herndon admitted to his actions when later confronted at the park. Photos and videos taken by a witness allowed police to positively identify the man.

The signs, which were placed by the City of Sandpoint as a result of the coronavirus pandemic, had bold lettering reading "Help keep our parks & trails open!" The signs also featured graphics encouraging members of the public to practice social distancing, wear masks and not gather in groups of more than 10.

As a result of Herndon's plea deal, prosecutors agreed to drop three of the four charges the man was originally cited for. Herndon also agreed to pay restitution.

"It was just to make a stronger statement," Herndon told KREM of his decision to rip up the signs.

The Sagle man argued that the signs were placed illegally by city officials. Other people had previously removed some of the signs, he said.

Herndon said his original intent wasn't to destroy the signs but rather place them in a pile by a maintenance building at the popular park. When a person who apparently disagreed with Hernon approached him and began recording his actions, Herndon said he opted to take his actions one step further.

"I guess it was kind of just a reaction at that point," he said. "I thought 'Well, just taking the signs down doesn't seem to be making enough of a statement.'"

Herndon provided KREM with a photo showing one of the signs he had ripped into four pieces.

Herndon added that he had differing viewpoints from health officials regarding the dangers posed by coronavirus.

"If you're trying to control an infectious disease, I do not see any point in closing a playground," he said.

Moreover, Herndon argued, people visiting City Beach should have been able to make their own decisions regarding what facilities to use at the park. Parents should have discretion over their children playing at a public playground, he said.

Herndon said he was surprised that removing the signs resulted in legal penalties, too. Had he known he would have been cited, he wouldn't have damaged the signs, Herndon said.

"This is a victimless crime, it's on public property. And it's signs that shouldn't have been there in the first place," he said.

As part of restitution, Herndon believed he would be on the hook for a couple hundred dollars to replace the signs. Formal restitution hadn't been decided just yet, however, court documents indicated. Hernon was slated to be sentenced in Bonner County's magistrate court in August.

RELATED: What's the wait time for COVID-19 test results in Spokane? It depends on where you go