Spokane County commissioners and Mayor Woodward want the county to move into Phase 3 of reopening. But Dr. Lutz isn't supportive of that yet. 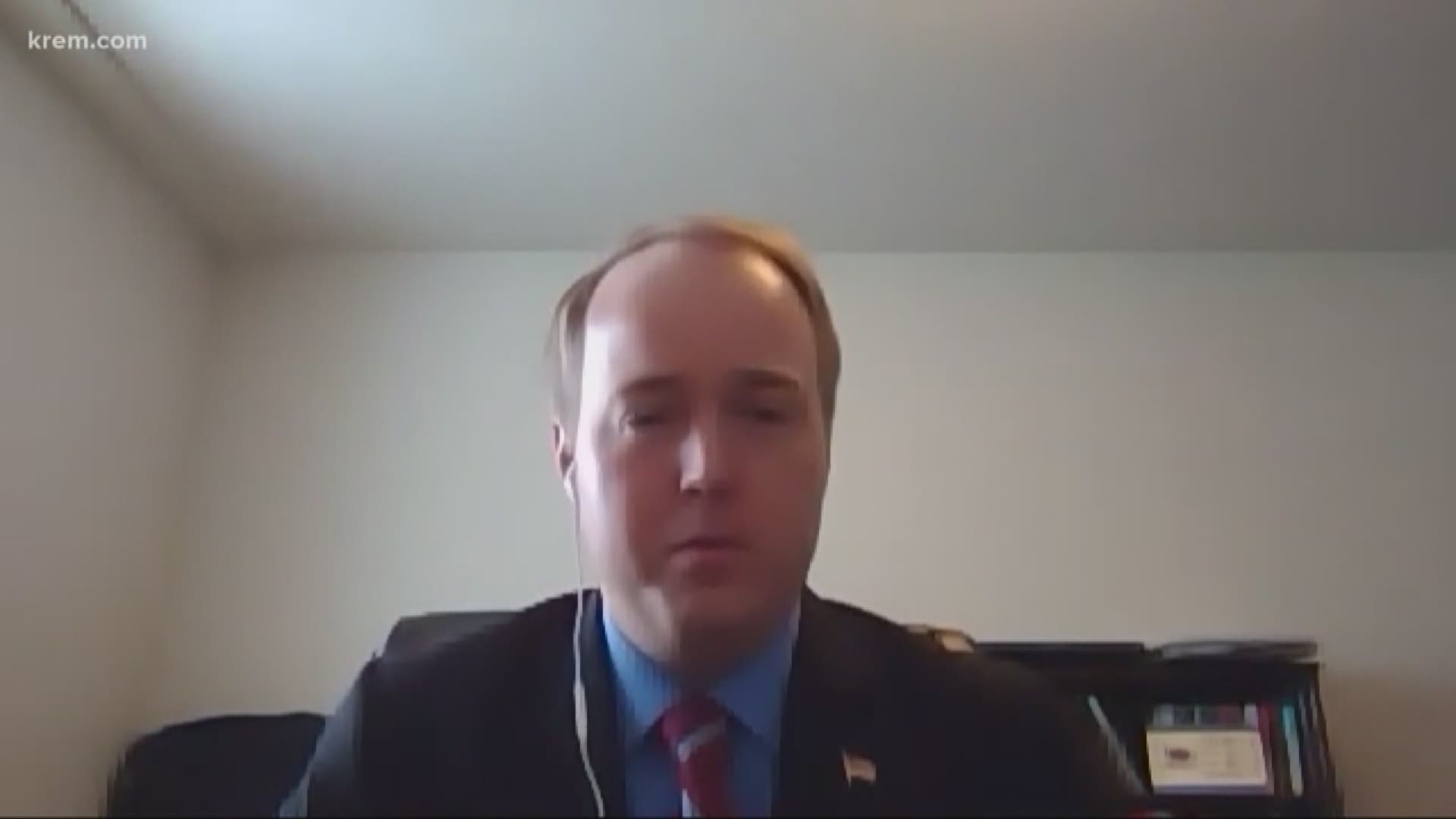 SPOKANE, Wash. — Elected leaders in Spokane County are pushing for a move into Phase 3 of reopening, despite the county's health officer expressing that the area isn't ready to move forward.

The Spokane County Board of Commissioners sent a letter to Lutz on Wednesday asking him to take “immediate action” in beginning the process of applying for the next phase.

“The Spokane County Board of Commissioners requests that you take immediate action to protect not only the health and safety of Spokane County residents, but also the health of our region’s economy,” a letter from the board to Dr. Lutz reads.

“With the increase in awareness about COVID-19 and after consultation with many stakeholders in the health, business and government sectors, we feel that the clear majority of our businesses and hospitals in our community are ready for Phase 3,” the letter reads.

A move to Phase 3 would be the “next logical step” in giving people their livelihoods back and getting “thousands of Spokane County residents back to work,” the commissioners wrote.

Lutz has said that he is not supportive of a move into Phase 3, citing the spike in COVID-19 cases since Memorial Day weekend and an uptick in hospitalizations.

“We’re definitely not going into Phase 3 in the foreseeable future," he said during a press conference this week.

In a statement responding to the commissioners' letter, Lutz said the Spokane Board of Health would discuss the county's status at a board meeting next Thursday.

His full statement is below:

I, along with the county’s Board of Health, share our community’s desire to move forward, to further open businesses and to bring life closer to normal. But, at the same time, we have to show patience, resiliency and mindfulness by remaining steady. We’re at a critical time, where deviating from a calibrated and methodical approach will undermine the progress we’ve made so far.

As we have experienced since the beginning of the COVID-19 pandemic, the data change quickly and are monitored daily. Given conversations with the Institute of Disease Modeling, I am concerned by recent signals suggesting increasing community-wide spread.

We take the move to Phase 3 of Governor Inslee’s Safe Start plan to reopen very seriously. We plan to discuss our county’s status at the regularly-scheduled board meeting next Thursday.

I also want to remind everyone it takes us all working together to prevent the spread of COVID-19. All of us contribute to this by continuing to physically distance from others when away from home, wearing a face covering when physical distancing isn’t possible, and washing our hands often. If we collectively follow these recommendations, the data will reflect our efforts and we will be able to move into Phase 3.

“We’re disappointed that he didn’t agree to begin the application process to fully move to Phase 3. We believe that there is a way to safely do that," Spokane County Commissioner Josh Kerns said in response.

“We’re right next-door to a state that is now fully open and surrounded by counties that are now going into Phase 3. Spokane County needs to as well," she said during an interview on Wednesday morning.

When Spokane County eventually moves to Phase 3 of reopening, gatherings of 50 people or less will be allowed, restaurants and taverns can operate at 75% capacity, bars can reopen at 25% capacity, theaters and recreation facilities can reopen at 50% capacity, and libraries and museums will reopen.

Right now, the state says that a county should have 25 new cases per 100,000 people in a two-week period before moving ahead in reopening. That would mean less than 130 cases over two weeks for Spokane County.

The numbers in Spokane County do not fall within that metric right now, Lutz said. In the last three weeks alone, the county has had more than 360 new coronavirus cases. Woodward attributes the increase to better contact tracing efforts.

Woodward told KREM that she hopes to speak with Gov. Jay Inslee about loosening statewide guidelines for entering Phase 3. But Lutz said on Wednesday that this would not serve Spokane County well.

“I would not support any loosening of those criteria whatsoever going forward," he added. 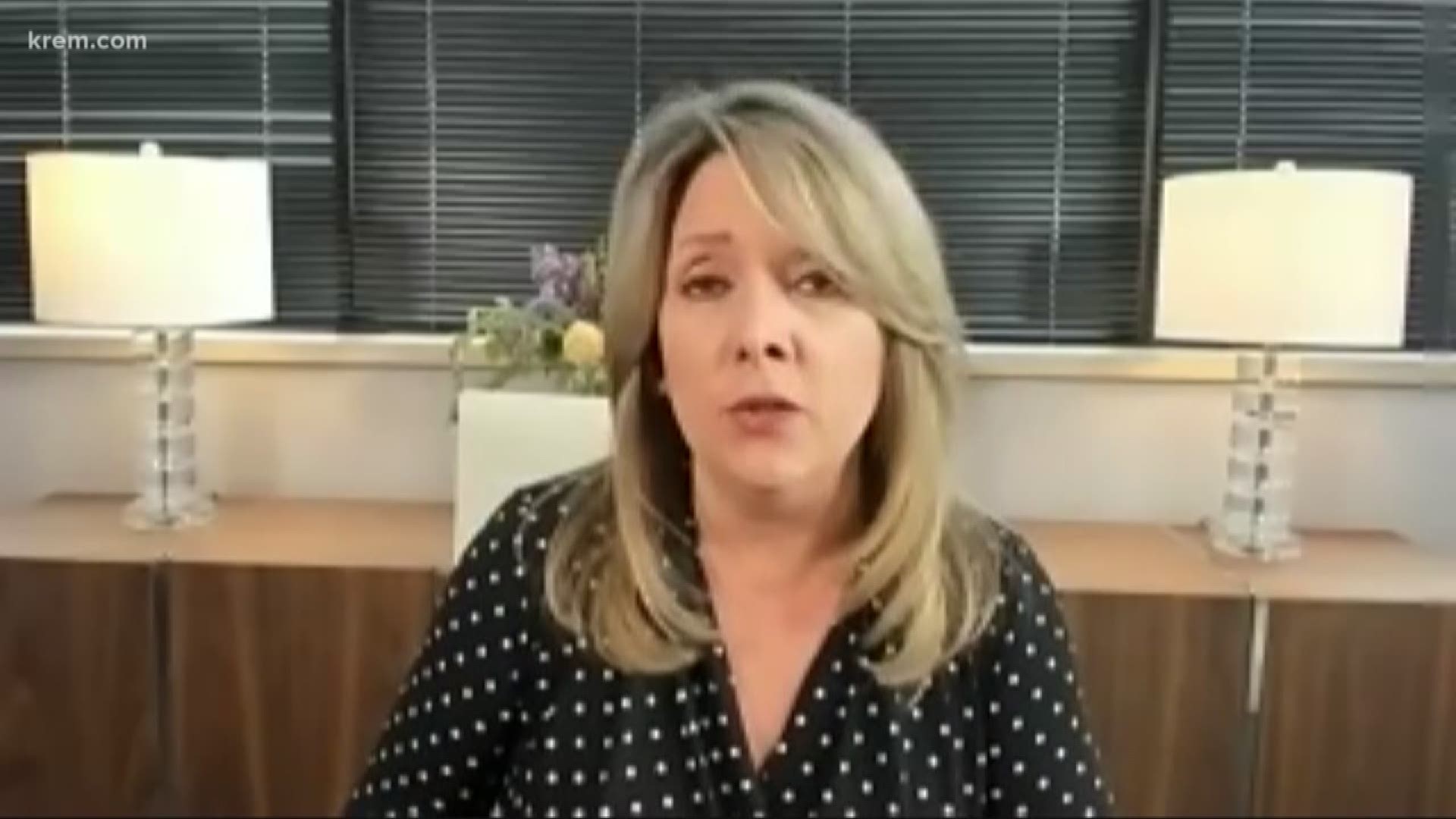 Lutz said he wants to see several weeks of lower case counts and hospitalizations before he considers a move into Phase 3.

Spokane County is meeting other metrics from the state, Woodward added, including a healthcare system that is not overburdened and a death rate that has not increased dramatically. She said on Wednesday that 21 of the county's 37 reported deaths have been in long-term care facilities.

“If anything, we need to make sure we have stronger protection measures in place for congregate and long-term care facilities because are the people in our communities at the most risk," she said.

Woodward also emphasized the need for more widespread testing in the Spokane community.

“At some point, we have to learn to live with COVID in our community until we have a vaccine," Woodward said, adding that she is still asking people to physically distance in public and wear masks whenever possible.

Though Woodward says she will continue to advocate for Phase 3, she acknowledged that Lutz is the authority in moving ahead. The county needs a letter of support from him and approval from the local board of health to apply for the next phase.

"He is the health authority during this health pandemic. It doesn’t matter what I say if the doctor says that we’re not ready," she said.

Theoretically, the possibility of moving backward into Phase 1 exists, but Lutz thinks that it is unlikely.

“I think the challenges of going backward are infinitely greater than staying put," he said.

Gyms anxious to move into Phase 3

Gyms are one of a few businesses that could increase their operation capacity under phase three.

Shannon Orlando is a fitness instructor at YMCA.

"I am very anxious to move into Phase 3," Orlando said.

She was back at the YMCA on Monday for the first time since March for its limited reopening, but she will not be holding any classes just yet.

"I will have to go and clean all the equipment," Orlando said. "They give me about a half an hour between groups, then another group will come in after that."

"They really miss the classes too because they are not just about the physical activity, they're about the relationships you build there," Orlando said. "We will even push each other to push ourselves harder."

The Spokane YMCA reopened at 30 percent capacity, and staggering the number of people who come in. In fact, it's open by reservation only.

Woodward is glad to hear it has reopened, adding it's important for mental and physical health.