Rising case numbers mean the state may have to move backward in phases, a frightening prospect for local leaders and businesses. 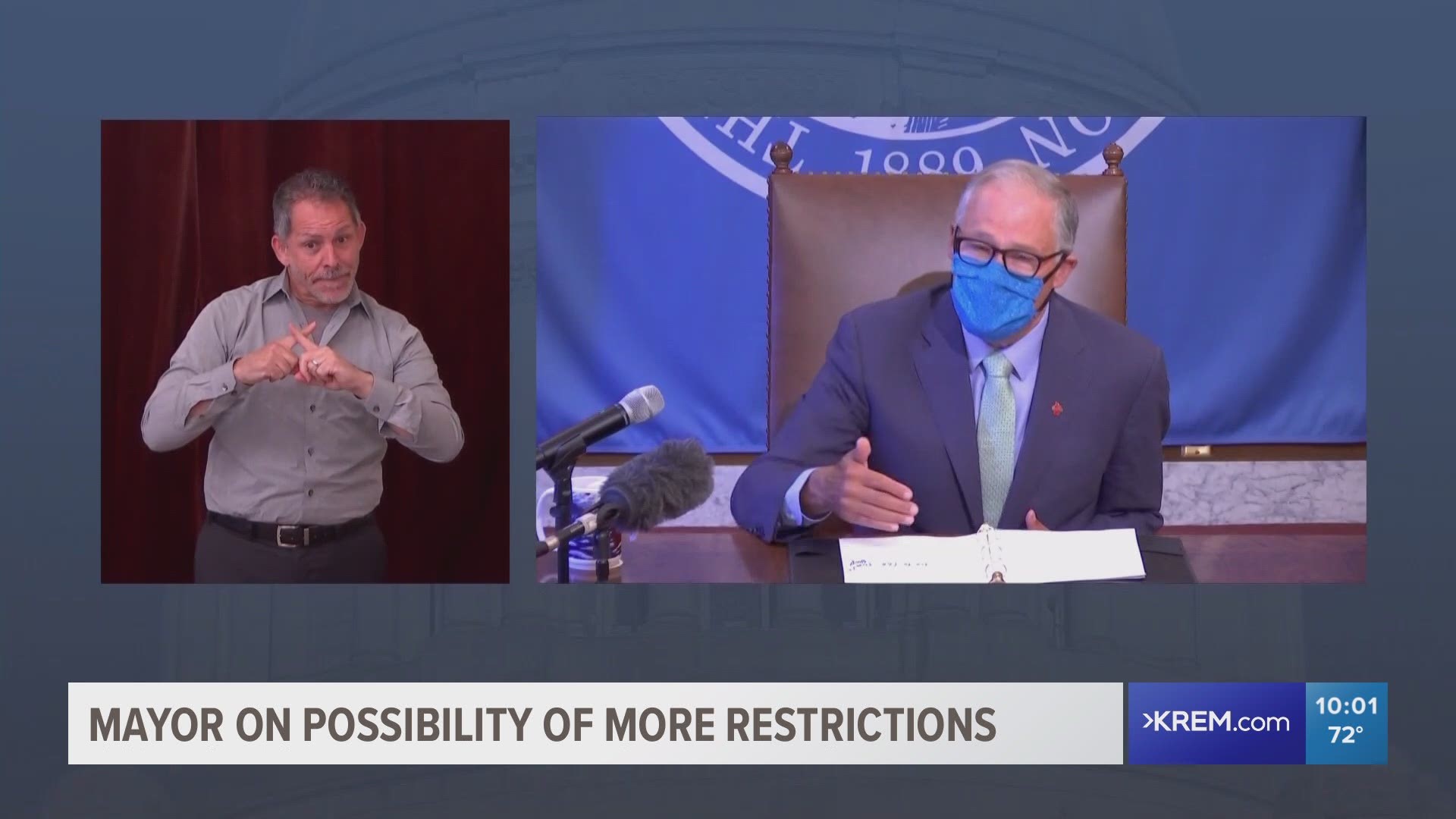 SPOKANE, Wash — As many states continue to see new surges of COVID-19, some such as California and Oregon are deciding to effectively move backward in reopening and bring back old restrictions that had previously been lifted.

In Washington, Governor Jay Inslee has not yet made such a decision, but for the first time on Tuesday announced it was on the table.

"There is a significant chance that we would have to take some of these measures," he said in an afternoon press conference.

Inslee said mask-wearing has recently increased, and that such compliance is helping to slow the exponential spread in some areas.

Nonetheless, the governor emphasized that he would have to take more dire action unless coronavirus numbers improve soon.

"We have to look where we are going to be, not just where we are. And we are heading to big trouble if we do not figure out a way to knock this pandemic down," he said.

He did not provide specific details about what kinds of restrictions might be reinstated. In other states, they have included shutting down salons and dine-in services.

For Spokane's economy, such moves could be disastrous. Mayor Nadine Woodward says she's regularly in touch with local businesses, who are barely staying afloat as is.

"If we do go back, I fear that we will lose some businesses," she told KREM.

Some restaurants, such as the Crimson Hearth, are already preparing for a case in which they need to close their dining rooms yet again.

Inslee said he hopes to avoid such a scenario, but made it clear there's another one he fears more: overflowing hospitals.

"[These] would be really tough, tough decisions. But the status quo we know is very, very dangerous right now," he said. "And we cannot accept the worst case scenario of experiencing what Arizona or Florida or New York have experienced."

Woodward didn't say whether she would support reinstating restrictions, instead saying we need to work hard to prevent them from even being necessary.

"What we can do in the meantime is make sure that we're doing everything we can to stay in phase two as a community," she said. "So let's not make it that much harder for our businesses. When you walk into a business, make sure you have your mask on, and physically distance."

Inslee did not provide a timeline or criteria for specifically when new restrictions would be more seriously considered. He did announce no currently existing restrictions will be lifted until at least July 28.

RELATED: Washington state extends freeze on phases of reopening until at least July 28

RELATED: Spokane gets $500K to help renters who lost wages due to coronavirus