The latest spike in Spokane County is still happening, and though it’s 15 days longer than the first, it’s amounted to 2,393 more cases than the first spike so far. 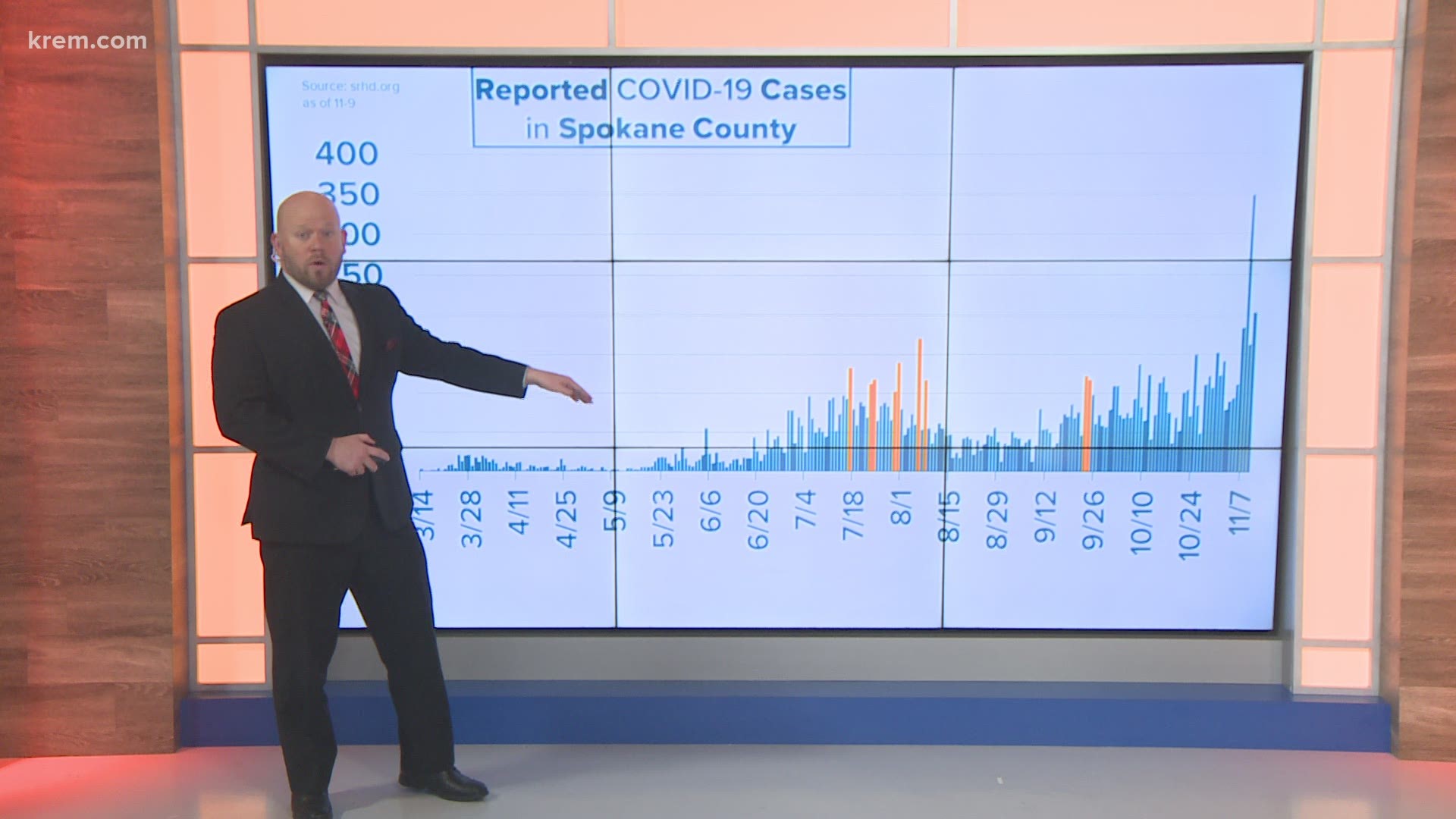 SPOKANE, Wash — Spokane County saw its first coronavirus cases on March 14, 2020. Since then, the county has seen two significant spikes in cases: once over the summer and one that's happening right now.

The two-week case rate in Spokane County is also higher right now than it was during the summer spike, according to SRHD spokesperson Kelli Hawkins.

Hawkins said there are a number of factors playing into the current spike in cases.

"When you include pandemic fatigue, rising case numbers and cold weather that bring everyone indoors, this current spike is worse. Many people continue to not follow the health measures that can help prevent spread," Hawkins said. "Wearing masks, physically distancing and washing hands are more important than ever as the weather cools and people are more inclined to gather indoors where the air circulation is not good. We continue to see outbreaks among gatherings in homes and among friends and family that then spread in workplaces and other public places."

In the 40 days since Oct. 1, Spokane County has seen 21 days where single-day totals climbed above 100. That means the county saw double the amount of days where case reports exceeded 100 in one-fifth of the time.

As of Tuesday, Nov. 10, Spokane County has also crossed the 100 mark for single-day cases 11 times in the past two weeks.

From March 14 to May 14, there were 394 total cases, averaging out to just over six cases a day, according to the Spokane Regional Health District’s data dashboard. Out of those 62 days, only twice did daily case counts amount to more than 20. The following months show a significant increase in cases, specifically from early July to early August and late September into early November.

According to the Spokane Regional District’s COVID-19 data dashboard, from July 5 to Aug. 5, there were 2,552 cases with an average of just over 82 cases a day.

In those 31 days, the dashboard shows 130 people were hospitalized. The highest number of hospitalizations was on July 30 with 10.

During the same time period, there were 45 deaths. The dashboard shows at least one death everyday from July 24 to Aug. 5.

According to the dashboard, 159 people have been hospitalized. The highest number of daily hospitalizations was reported on Nov. 6 with 12 total.

Hospitals are 'concerning' in Spokane County

"In addition, because they work in a higher-risk sector their exclusion criteria are stricter and longer, which is putting a strain on the system. Hospital systems are strained all over our area, and when nearby hospitals are at capacity, it impacts Spokane hospitals. Influenza season is coming and may further strain our healthcare system," Hawkins added.

Over the last 47 days, the dashboard shows 56 deaths. There was at least one death every day for a week twice during that time period.

The group of people ages 20-39 continues to drive positive cases in Spokane County, Hawkins said. Health officials have also seen an increase in cases among people ages 10-19 over the past two weeks, she added.