The owners said if they continue to operate passed that date, it would compromise their legal battle and expose them to more fines. 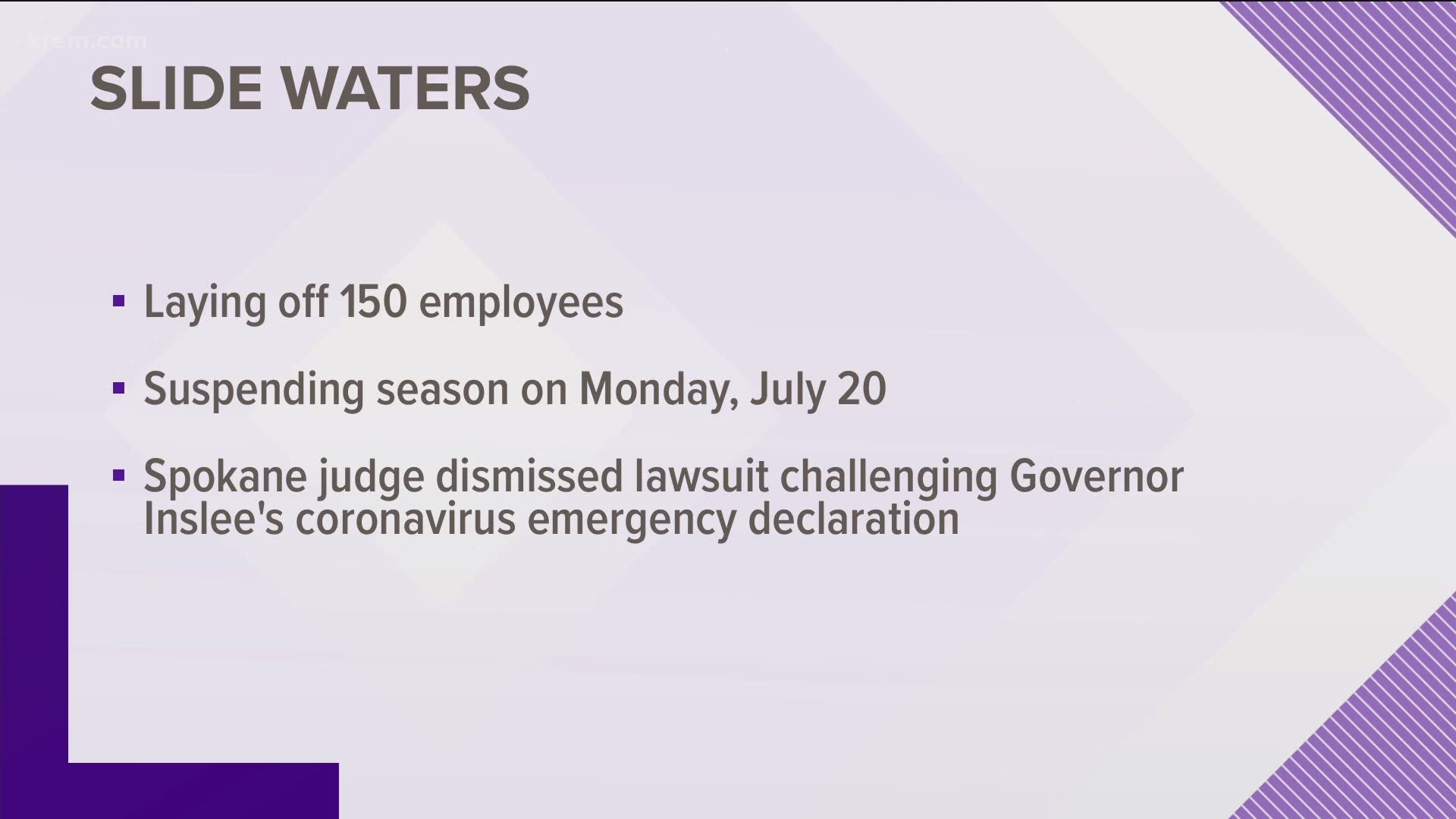 CHELAN, Wash. — The waterpark who sued Washington Governor Jay Inslee over the coronavirus emergency order announced Friday that it’s suspending its season and laying off employees, according to a press release from the owners.

Slidewaters, a water park in Chelan County, remained open in violation of the governor’s order, according to a press release. The park filed a lawsuit against Inslee and the Department of Labor and Industries on June 8.

Burke and Robert Bordner, the owners of Slidewaters, said in a release despite their appeal to the Ninth Circuit Court and a case pending in Chelan Superior Court, they have no choice but to layoff 150 employees and suspend their season on Monday, July 20.

“This is because of extraordinary and unfair harm and suffering being brought upon us from the actions of Governor Jay Inslee and the Department of Labor and Industries,” the owners said in a release.

The Bordners said they have been issued a Notice of Immediate Restraint, a citation and Notice of Assessment from L&I, with a demand to correct their actions by July 20. They said if they continue to operate passed that date, it would compromise their legal battle and expose them to more fines. It could also lead to criminal charges, the Bordners said.

Reducing their season down to 30 days has the business “facing the serious possibility of not being able to reopen our doors next year,” according to the press release.

The Bordners said they’ve received funds from the federal Paycheck Protection Program and Small Business debt-free program. However, with the suspension of their season they don’t know if they will be able to cover expenses moving forward, the release says.

“We sincerely hope that this will not be necessary, and that we can continue to provide the residents of Washington with an outlet for safe, clean, healthy family fun for years to come,” the Borners said in the release. “We are truly overwhelmed and touched by the support from our team members, families, friends and our amazing guests, throughout these trying times, and we will be doing everything possible to honor their support by fighting for our business and for the rights of citizens.

Unfortunately, the state has clearly indicated it plans to pursue imprisonment for us if we do not comply with their dictates. Time away from our families does not align with our ultimate mission of strengthening the American family through strong relationship-building activities and criminal charges could prohibit Slidewaters from holding a business license in the future, which would also interfere with our goal to glorify God with a business that brings families together. After operating for 30 days and seeing all our team members remain healthy, with no contact tracing of the virus back to us from any guests, now more than ever we stand behind our Clean & Safe Plan. For four weeks we have offered a safe place for families to escape the stress of 2020 and live, laugh and enjoy life again. It is with tremendous sadness that we face the reality that after 38 years of offering a place for family recreation, Sunday could be our last operational day ever.”

Slidewaters will continue to operate through Sunday, July 19 under its Clean & Safe Plan at 50 percent capacity.

RELATED: In-person classes for Washington students 'at risk' this fall due to rising COVID-19 cases