SPS passed the budget at a school board meeting on Wednesday, just weeks before school was set to start. 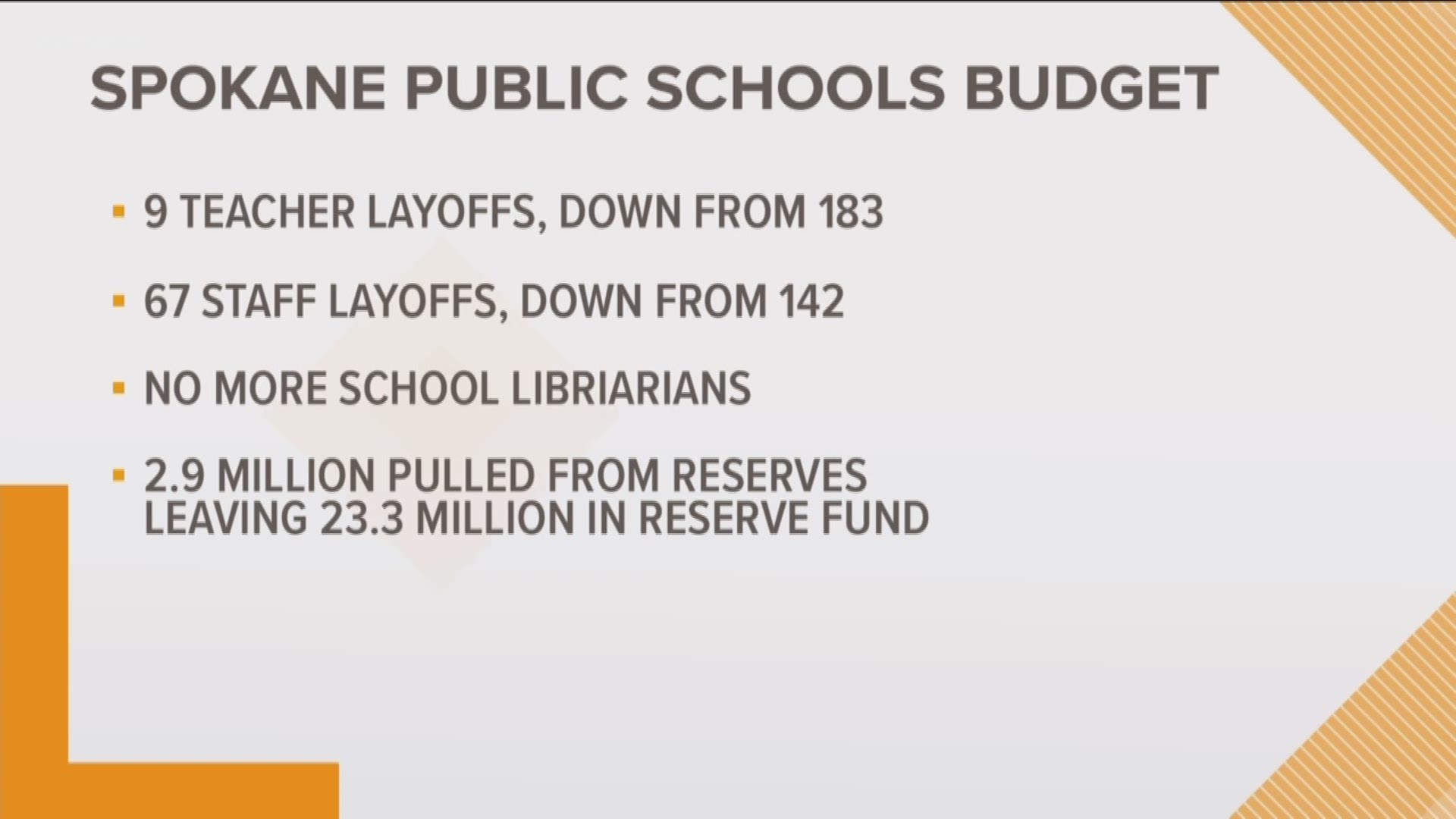 SPOKANE, Wash. — Spokane Public Schools passed a $461.9 million budget for the upcoming 2019-2020 school year at a meeting on Wednesday night.

It features far less severe cuts than were initially feared in the spring, when layoff notices were issued to hundreds of employees.

The board passed the budget unanimously, 4-0, with board member Michael Wiser absent.

In April, the district announced 183 teachers would be laid off. Now, that number sits at just nine. That's thanks to a combination of factors, including new money from the state, a board decision to dip into some reserves, and many teachers opting to leave the district on their own accord.

One of the biggest changes families will see first hand: more early releases. Elementary schools will release at 1:45 p.m. every Friday of the school year.

For some of those Fridays, the district will provide after-school activities, and run buses both when school lets out at 1:45 p.m. and when the activities wrap up at 3:00 p.m.

Twelve Fridays of the year will be used for teacher planning and training, which will result in early release for those weeks at every school district-wide. The other 20 Fridays will be normal for middle and high schools, but still release early for elementary schools. Those 20 will be the weeks with after-school activities provided.

The district will provide parents with a calendar regarding which Fridays have activities and which do not.

The library model will still change as expected early in the budget process. There will no longer be dedicated librarians.

Instead, those employees will become regular classroom teachers.

A library clerk will maintain the library, and teachers will help their own students check out books.

Initially, 60 such classes were forecast, but after the board expressed concern about such a high number, funds were allocated to reduce it to 41.

The budget also included a 10% cut in spending for administration, the central office and other support operations.

The budget leaves the district operating at a deficit for the 2019-2020 school year. That means, per the board's decision, tapping into reserve funds.

About $2.9 million will be removed from reserves, leaving that fund with $23.3 million.

The voters had previously approved a rate of $1.71, but the state legislature instituted a cap on local levies a few years ago that brought it down to the $1.50 number.

That cap was raised in the most recent legislative session to $2.50. That means the board can vote to reinstate the $1.71 rate without a ballot measure.

The final budget passed on Wednesday expects the board to do that in the fall, meaning the rate will remain at $1.50 for the rest of the calendar year, but then increase to $1.71 in 2020.

The board could ask voters to approve a levy up to $2.50 in the future, but the current budget does not call for that.

The budget was passed on August 14th; the school year begins August 29th.