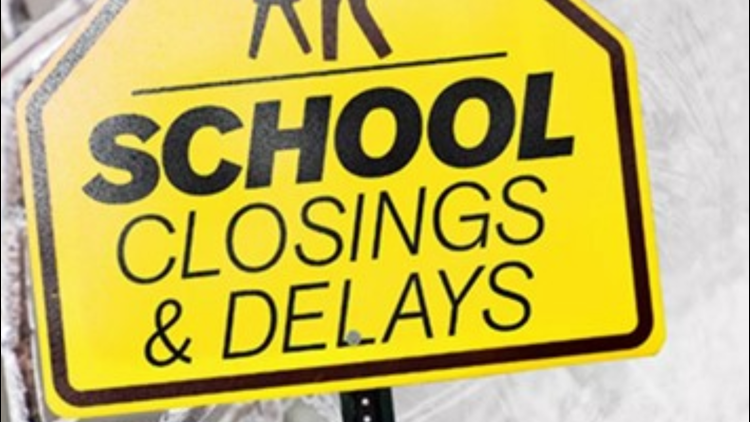 SPOKANE, Wash. — Dozens of schools in eastern Washington and North Idaho are closed after heavy snow blanketed the area over the weekend.

Snow will continue to fall around the Inland Northwest through Monday morning.

Spokane will likely pick up between one to two inches on Monday morning, while areas such as Coeur d'Alene could see between three and four inches of snowfall.

Some major school districts in North Idaho announced that they are closed on Monday, including Post Falls and Coeur d'Alene. Others in more rural areas, such as Kellogg and St. Maries, are also closed.

Zero hour classes, morning programs and preschools are canceled for the day.

View all school closings and delays

Parents who wish to keep their children home from school should contact the office, SPS wrote on Facebook.

Colleges in the Spokane area, including Gonzaga and Eastern Washington University, are opening on time. North Idaho College's main campus is open, while its campuses farther north are closed.

The districts that are closed or opening late cited poor weather and road conditions in the area.

Snow showers could continue on Tuesday, but amounts should be light and the snow will likely be powdery,

More significant snowfall is not expected until Thursday and then again on Saturday.

The coldest temperatures of winter so far are expected to arrive in the Inland Northwest this week. NWS says the cold will be accompanied by blustery winds and the potential for blowing snow.

NWS predicts that Spokane's high temperature will sit at 12 degrees on Wednesday, Jan. 15. Low temperatures could dip below zero in both eastern Washington and North Idaho.

RELATED: Over 130 reported car crashes in Spokane after record falling snow on Friday