Gov. Inslee signed a measure to ban the use of Native American names, symbols and images as school mascots, logos and team names. 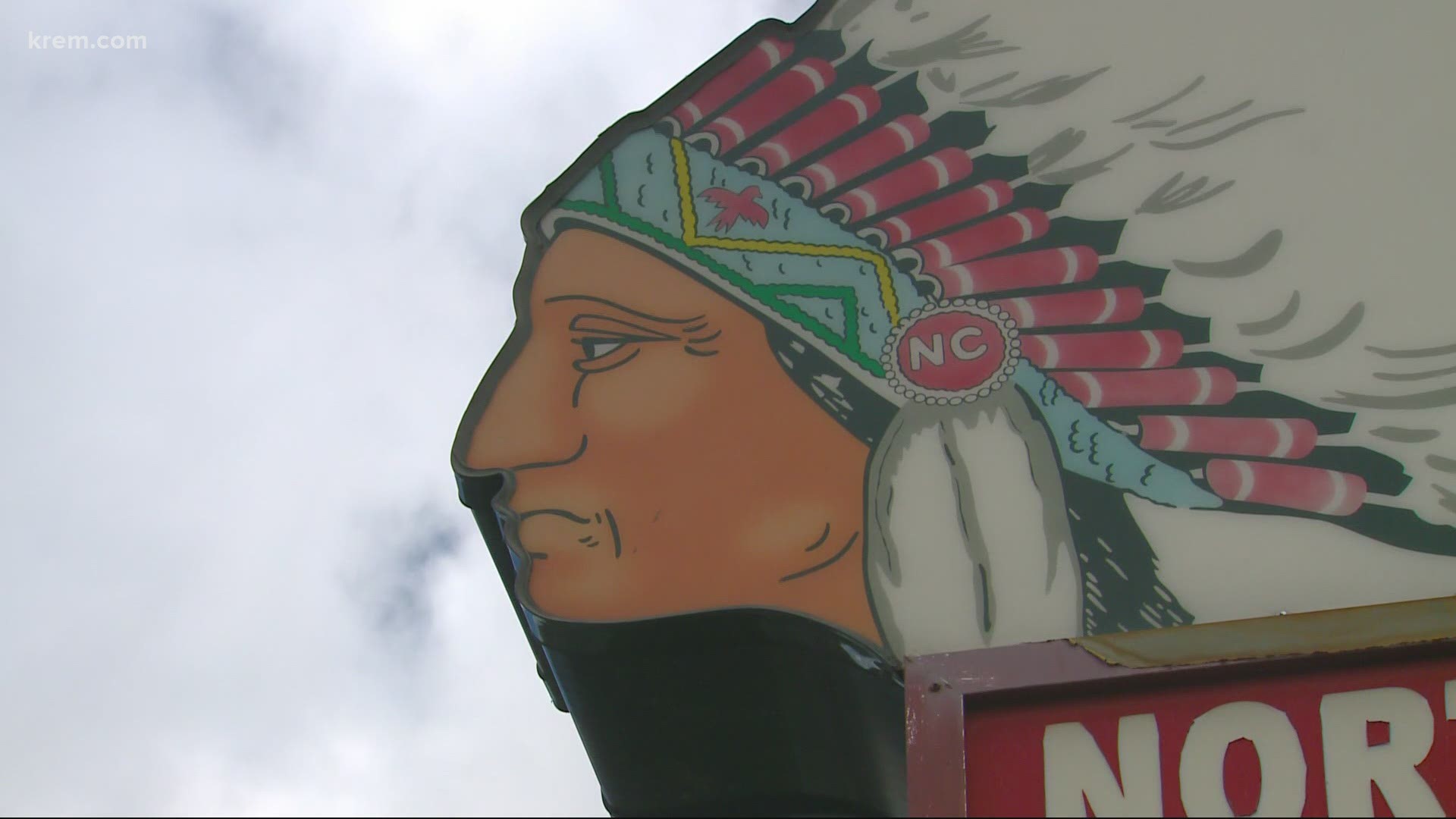 SPOKANE, Wash. — For about a century, North Central High School's mascot has been the 'Indians,' and there are a lot of emotions tied to the idea of changing it. In a public meeting Tuesday night, every person who attended said the imagery is offensive and inappropriate.

During a meeting in March, the board discussed possible changes to the high school's mascot and accompanying symbol. NCHS has had an Indian as its mascot since the 1920s, but many people have said the imagery is offensive and inappropriate.

When Native American students walk to class, they come face-to-face with a caricature of themselves. In a display case in NCHS, an Indigenous figure stands as the symbol and mascot of the primarily white population.

"How horrible is that — that you are allowing children to walk on the faces of Indigenous Peoples, whether they're characters or not?" Tara Ramos, a NCHS mother asked.

Ramos is an Indigenous mother-of-three and had been urging administration to change the mascot for 25 years. She started when she was a student, telling her story that she had to leave North Central due to racism.

Her children are now in the SPS school system, and she told the district that this symbol causes harm. She was one of about thirty people who says enough is enough.

"It's harmful to not feel safe and welcome in the halls of their own school, when they are caricatured or made to feel less of a person," another added.

For an hour and a half, the Spokane Public Schools board listened to feedback regarding the high school and it's mascot. This comes after the Washington Legislature approved a measure to ban the use of Native American names, symbols and images as school mascots, logos and team names at most public schools in the state. Gov. Jay Inslee signed the measure on Monday, April 26 and the ban will take effect on Jan. 1, 2022, the Associated Press reports.

Although no one voiced major opposition at the meeting, online Facebook commenters in an alumni group state that they were always proud of being "Indians," stating Indians were "brave, strong, loyal and proud" —  this is exactly what one Indigenous community members addresses as disrespectful and racist.

"Let's be real here. When someone, especially the person being affected, tells you something is hurtful or offensive... Why not believe us?" he asked. "The fact that we are here tonight, having to once again state our existence is evidence that we are once again made to feel invisible and voiceless."

Under the measure, school districts would have some time to phase out the mascot, team name or logo, but they would be required to select a new mascot by Dec. 31 to take effect by the end of the 2021-22 school year. Starting in 2022, they would not be able to purchase uniforms that include the old mascot or name.

"It is time to end the celebration of genocide," she said. "We already stole this land that we live on. Isn't it time that we stopped stealing away the voices and respect of our Native students, staff and community too? It is time for the symbol to be removed once and for all."

The SPS board is holding another forum that will address steps moving forward. It is scheduled for 6:15pm. on Wednesday, April 28. Information about requests for participation in public comment and the Zoom link to attend the forum are available on the SPS website.

Ivy Pete, a 16-year-old junior at NCHS, worked to pass the bill banning the use of Native American symbols and images as school mascots. She is a member of the Pyramid Lake-Paiute Tribe of northern Nevada.

Pete said she hopes the community can decide on a mascot that makes everyone happy and "recognize that we're not trying to erase our history."

"We're just trying to make sure that we can continue in a way that makes everyone feel safe at North Central," she added.

A new mascot will eventually be recommended to the school board for approval after input from staff, students and community members, according to school board policy.