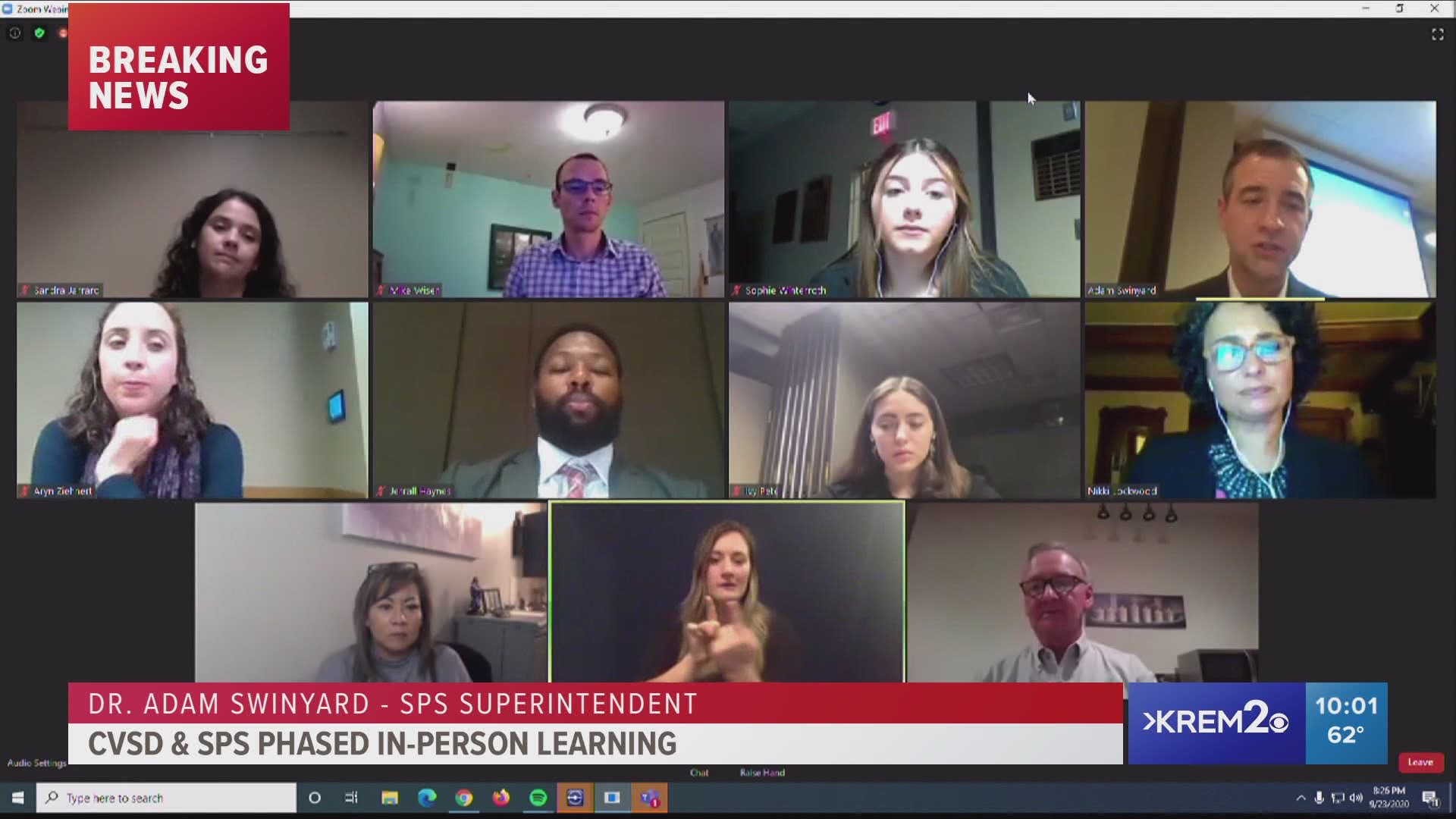 SPOKANE COUNTY, Wash. — School districts throughout Spokane County are planning for the return of their youngest students to classrooms on Oct. 19.

SPS students will attend school on an alternating schedule, in Group A or Group B, at the start of the process. School will start at 8:30 a.m. and end at 2:25 p.m.

Information on the alternating schedule and the assignment of student groups will be provided next week, the district wrote online.

During their off days, the students will have facilitated activities. Those activities have not been designated yet.

After the initial alternating schedule, all kindergarten students will attend school every day.

Schools are working on cohorts and they will be announced soon.

Masks must be worn at recess. There will be structured mask breaks so the kids will be able to get fresh air outside. In regards to meals, they will be served in the classroom and supported by teachers.

Spokane County Health Officer Dr. Bob Lutz said on Wednesday that he supports area schools allowing students in kindergarten through second grade to return to the classroom for in-person instruction.

The board said kindergarten students would return to classrooms on October 7 and would follow an alternating schedule in two main groups, A and B. Students would attend classes in groups of 20, and would also eat lunch and have recess with those same students.

CVSD said it will begin having kindergartens return to classrooms following an A/B approach on October 5-6 from 9:30 a.m. to 3:10 p.m., with full days starting on October 7.

West Valley School District's board of directors unanimously approved a plan on Wednesday to bring its youngest students back to the classroom in a Hybrid A/B model beginning Oct. 5.

The revised back-to-school plan provides for students to return to the classroom, one grade level at a time, in a Hybrid A/B model every two weeks provided COVID-19 infection rates stay within the approved range, WVSD wrote on Facebook.

The SPS plan calls for school days lasting from 8:30 a.m. to 2:25 p.m. Superintendent Adam Swinyard said it will be important for the district to slowly help the students transition back into the classroom setting, as well as to teach them new safety protocols such as wearing masks and social distancing.

Both SPS and CVSD will provide transportation services.

Swinyard said the district was encouraged by the fact that small group activities in the district being held since earlier in the year without a single case of COVID-19 being reported thus far.

Swinyard added that the board will finalize logistical details and communicate the plan with families in the coming weeks.

Looking ahead, based on guidance from Dr. Lutz and other public health officials, SPS said it will work to form plans to start bringing other grades back into the classroom as well, moving up by age as time goes on.

Families within SPS and CVSD can continue to follow a distance learning model if they are concerned.

Freeman School District Superintendent Randy Russell said he is meeting with Spokane Regional Health on Monday to discuss plans to have more students K-5 back on campus.

"We're really excited to have that conversation. We are excited about the possibility of having more kids on campus," he said.

Nine Mile Falls Superintendent Brian Talbott said he is anxious to be able to return to some in-person learning, but the district still has some logistics to work through in order to do so. Talbott said he hopes when they are able to bring students back, they can do so safely and not to be in a position to have to move backward.

The Cheney School District's board has a virtual work session scheduled Thursday night to discuss their plan to return to in person learning. Their school board will take action/vote on a plan at their regularly scheduled board meeting next week.

The Riverside School District  said during a board meeting that it wants to have a decision on possibly moving forward to stage three of its reopening plan - which calls for K-5 to attend in-person every day, an AB schedule for middle and high school student and online for those who want it - by the district's Oct. 5 workday.

“We’re watching the data closely, and although our county remains in the high range, we feel confident in the plans these school districts have developed for a safe return to in-person learning,” Lutz is quoted as saying in the release.

Lutz said later in the release that he supports bringing Kindergarten students in first with a staged approach for other elementary grade students. He said this comes as a move to address social and emotional learning needs as well as skill development, child safety, and academic inequities in these young students.

"Our guidance for opening schools has been a balancing act," Lutz said in the release.

The board also announced that a plan to allow groups of five students to participate in sports camps starting on Sept. 28.

Up to two groups of five student-athletes, so long as they are outdoors and following all COVID-19 health protocols, would be allowed to participate in sports camps with a single coach starting on Sept. 28 after approval from the WIAA and the Spokane Regional Health District, according to the board.

Athletes would still need to be six feet apart and wear face coverings, the board said during the meeting.