The requirement comes as Bonner County COVID-19 cases dropped to a “minimal” yellow risk level, as determined by Panhandle Health. 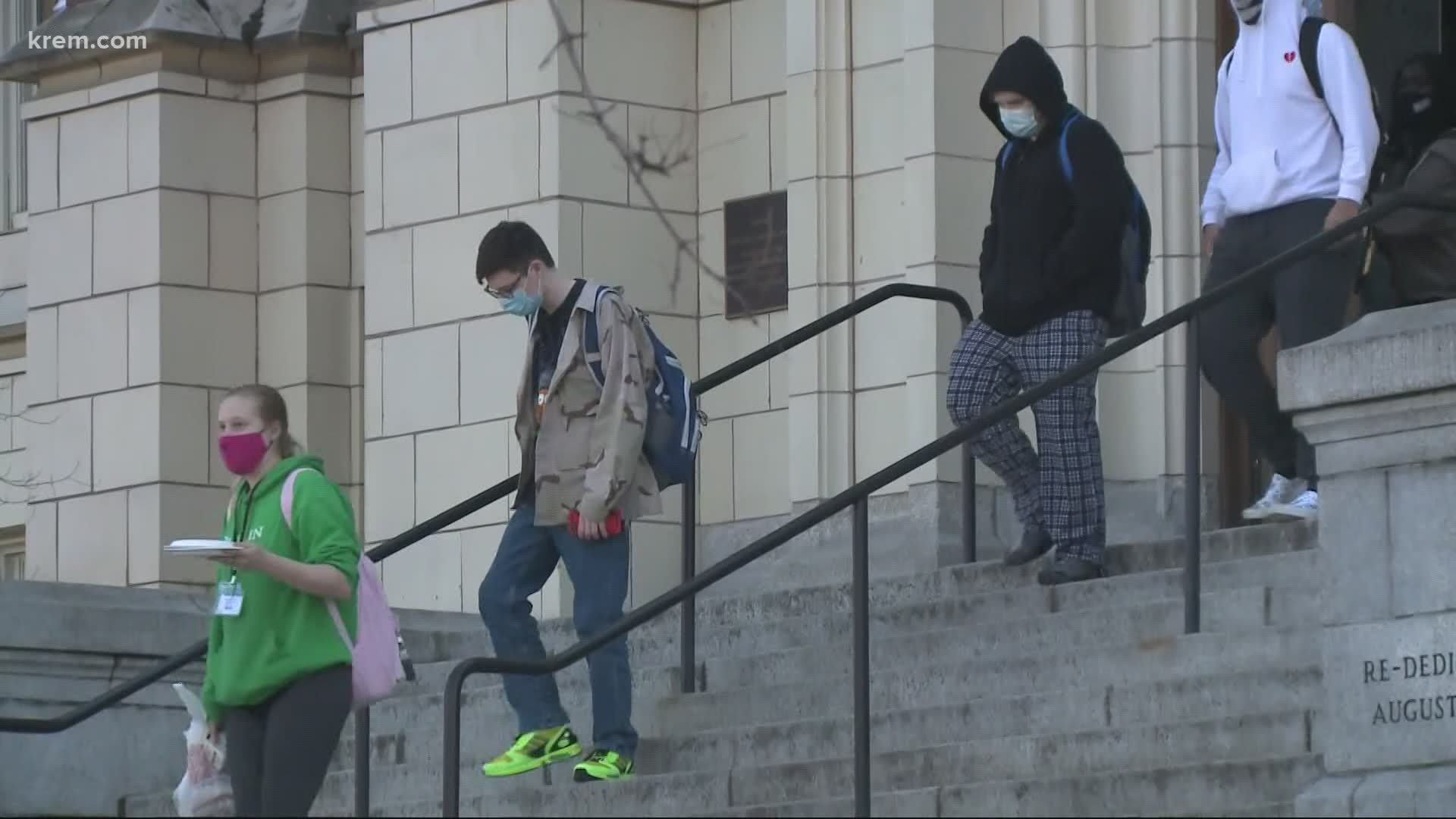 PONDERAY, Idaho — The Lake Pend Oreille School Board voted to remove their mask requirement following spring break in a 3-2 vote at their meeting Tuesday evening, as reported by our news partner, The Bonner County Daily Bee.

The requirement comes as Bonner County COVID-19 cases dropped to a “minimal” yellow risk level, as determined by Panhandle Health.

As of Tuesday, the district had two active cases said Superintendent Tom Albertson — one at Sandpoint High School, and another at Washington Elementary.

“I’ll be the first to say I think it’s time to get rid of the mask mandate,” said Trustee Cary Kelly. “The fact now that our staff has had the opportunity to get vaccinated, that makes a big difference to me.”

All teachers who wanted to, said chair Jeraldine Lewis, have now had the opportunity to be fully vaccinated. Other trustees expressed similar feelings in support of the measure.

"We’ve been going down this road for a long time,” said Vice Chair Lonnie Williams. “It hasn’t materialized as a dangerous thing for our kids.”

Albertson said district staff are split on the issue of masks, and that it was not his role to advise the board, but noted that spring break has the potential to increase virus spread and that two spots in Idaho, Idaho Falls and Rexburg, are among the top COVID-19 hotspots in the country.

In addition, he added, the district will soon have testing for the Idaho Standards Achievement Test and the Idaho Reading Indicator.

Smith confirmed many teachers are split on the issue, with some feeling masks are detrimental to student learning and that there had been an opportunity for vaccinations, with others voicing concerns for family members who are at risk and not yet eligible for the vaccination.

Despite those uncertainties, the board showed general support of removing requirements for face coverings. Lewis said the board should wait until after spring break to allow families with students who may be immuno-compromised to adjust their plans.

The board passed the decision, with Trustees Cary, Purley Decker and Williams voting yea, and Gary Suppiger and Lewis voting nay — Lewis stating she would prefer a more specific rule for different age groups.

Suppiger also made a motion to remove classroom cohorts, which failed 4-1.

“I believe that would put our nursing staff in a real bind when it came to a positive [case],” he said. “My recommendation would be to hold off.”

The school board also unanimously approved planned expenditures for the first two installments of COVID-19 relief funds, known as ESSER I and ESSER II or more commonly Cares Act funding, as instructed by the Idaho School Board Association attorney.

At the state level, the Joint Finance and Operations Committee finalized the fiscal year ‘21 appropriations, said Chief Financial and Operations Officer Lisa Hals. JFAC also clarified that the governor’s 5% holdback would be coming from non-statutory funding.

At this time, JFAC also appears to have approved 50% of ESSER II Funds, Hals said. The session is on pause until April 6 because of positive COVID-19 cases. That means there’s still uncertainty for the district, Hals said — the district planned to spend the rest of its ESSER I funds by the end of April and begin spending ESSER II funds in April, but those are yet to be approved.

It’s also unclear, she said, when the district will have access to ESSER III funding from the latest stimulus package. The district is expected to receive roughly $5.7 million, although that has not been appropriated yet.

Other things in the state legislature that will affect the district is a proposal by the governor to restructure personal and commercial income tax brackets.

“That’s the state’s single largest source of revenue,” Hals said. “[It] translates to impact the schools.”

The governor will also have funds he will be able to allocate, in part to schools, Hals said. Whether those funds are purely discretionary or must be approved by the legislature is yet to be seen.

Lastly, the district will be keeping its eyes on a temporary rule instituted by the State Board of Education to use student enrollment instead of in-person attendance for funding purposes. That rule is set to expire at the end of the session if lawmakers do not renew it, and could have a significant impact on school funding across the state.

The Bonner County Daily Bee is a KREM 2 news partner. For more from our news partner, click here.