The Coeur d'Alene School District Board of Trustees will take action on its masking policy during a special meeting on Monday night. 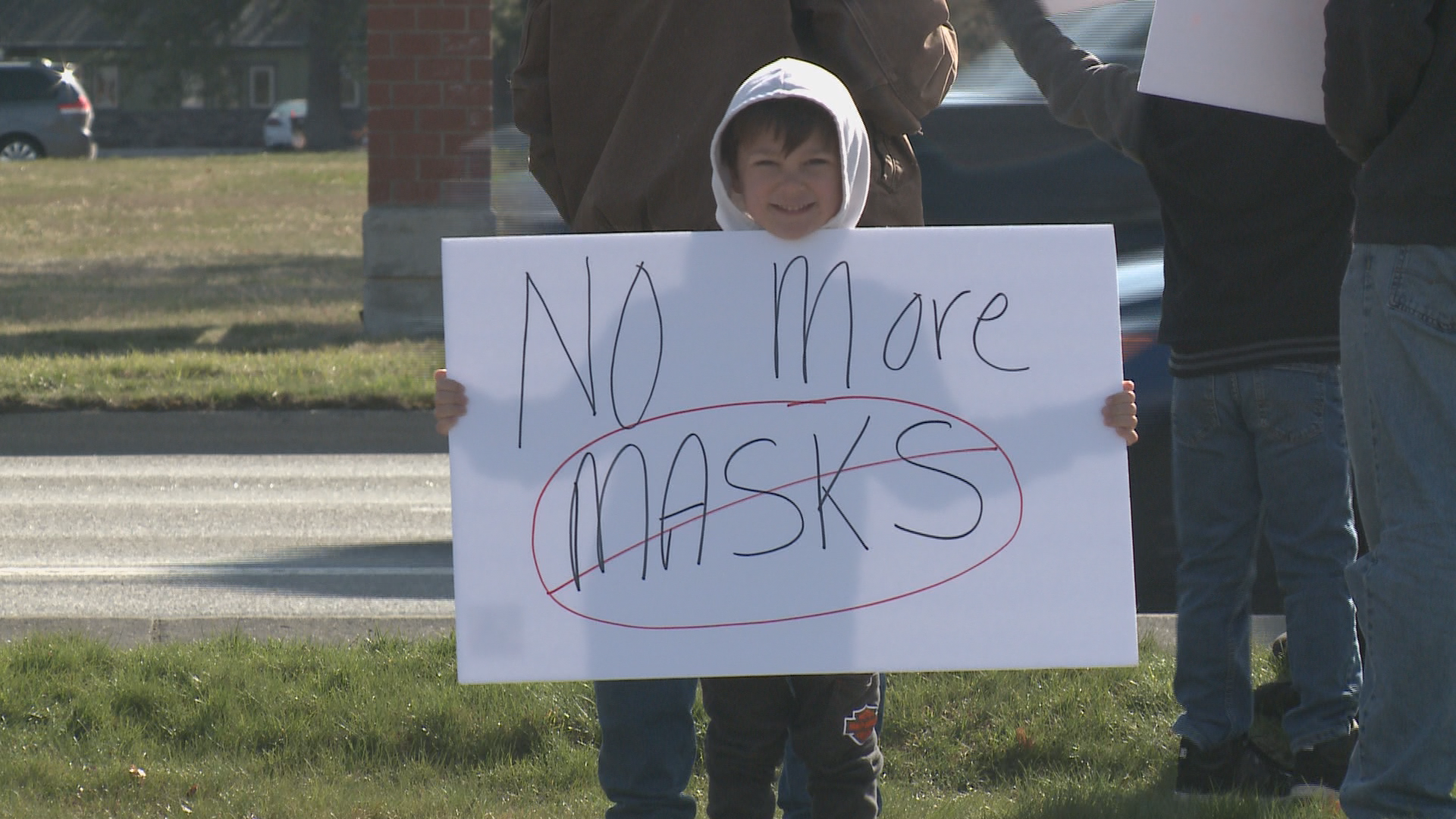 COEUR D'ALENE, Idaho — The Coeur d'Alene School District board will evaluate its mask requirement after pushback from parents, according to a spokesperson from the district. After months of protests, trustees will meet Monday evening to discuss the contentious policy 1207.

As the weather has warmed up, community members and parents have taken to holding up signs outside of different Coeur d'Alene schools, urging the board to rescind the mask mandate.

Although the board has been debating this decision for months, protesters took to Lake City High School on the morning of April 10 to make a statement.

High schoolers were finishing up their first class of the day when they looked outside to see protestors waving signs criticizing the CDA School District.

"It's not just going to change overnight by one protest," Ava said.

Their entire high school experience has been in-and-out of masks.

"It started off a little annoying, but now it's just simply easy," Maya added. "And it's not even that bad anymore."

Students were encouraged to walk out of class over school requirements to wear a mask, despite mask mandates in the county being lifted.

"I feel like protesting to the teachers and at school doesn't do anything," Wyatt said. "The teachers are just caught in the middle of it, and it's really unfair to them."

None of the trio attended the anti-mask protest. Actually, almost no students went. So if students didn't go, who did?

"I just read about this this morning and I believe in mask-steria," ex-firefighter Terry Switzer said, using play-on-words for "hysteria."

Around 50 people protested, the majority were like Switzer — community members with seemingly no tie to the school. The rest were parents, some even bringing their toddlers.

The Panhandle Health District rescinded their mask mandate at the end of March, but the school district's rule is still in place. Protesters argue that the schools shouldn't be forcing their kids to wear masks when the PHD isn't making anyone.

Wyatt said this protest may have been well intentioned, but it was not well executed.

"I think if we were to protest, we should go to the school board," Wyatt said. "Protesting the teachers doesn't do much."

The first is to continue their current plan of following PHD metrics, requiring masks while in the Yellow, Orange and Red stages. The next is to adopt a step down model where masks are phased out by grade level from PHD metrics. Another was creating a new metric system that focuses on positivity rate in Kootenai County, with a goal of masks being recommended instead of required. The final is to combine the second and third option to make a hybrid plan, following option 2 until option 3 criteria are met. Then, masks will be recommended rather than required.

However, there is also a fifth option that Cook did not suggest.

"I strongly recommend that masks are worn, but at this point I would be okay not requiring masks," trustee Casey Morrisroe said. "I support moving to a recommendation."

Morrisroe offered the option of rescinding the mask requirement entirely. Trustee Lisa May was the most vocal about not making this decision until the community can see updated data.

"Our students have lost so much in the last year," she said. "We're asking a small amount to continue this year masked, at least two weeks until we see how spring break settles out."

School district spokesperson Scott Maben agrees with May, arguing that the school just got back from Spring Break. With traveling comes an increase in positive COVID-19 cases, so wearing masks could help mitigate the spread.

"Juniors and our seniors are taking SAT exams, AP exams, we've got the prom coming, so there's a lot of critical and important milestone events that students experience in the final weeks of the school year, up through graduation," Maben said. "We don't want to see any students have to miss school or any of those spring events due to a quarantine."

Ever since the school district started masking, cases have gone down by many, according to Maben.

"Our school board needs to look at the data from Spring Break," he said. "But we will still be recommending that everyone wears a mask."

Anything is possible, he said. He made sure to emphasize the importance of these milestones and how quarantining is not a joke - the schools follow CDC guidelines.

"What's worse, masks or being quarantined for graduation?" he asked.

The trio say they don't care or mind having to wear a mask, but if they had the choice, they would choose not to.

"It's such a habit to bring them to school every day, you just know to bring it which is crazy because it's like I don't really want to wear it," Ava said. "But it's like a habit, I bring it everywhere with me."

They add it doesn't restrict them from doing work or just breathing, like the protesters alleged.

The special meeting will begin at 5 p.m. on April 19. A livestream will be available on the CDA Public Schools YouTube page.  Public comment may be submitted to trustees@CDAschools.org.

Protesters took to Lake City High School to make a statement. Students were encouraged to walk out of class over school requirements to wear a mask.

Students told me this protest may have been well intentioned, but it was not well executed. pic.twitter.com/bG6VnYcaCN