The unexpected move comes less than a week after the school held its annual community fundraiser, bringing in more than $355,000. 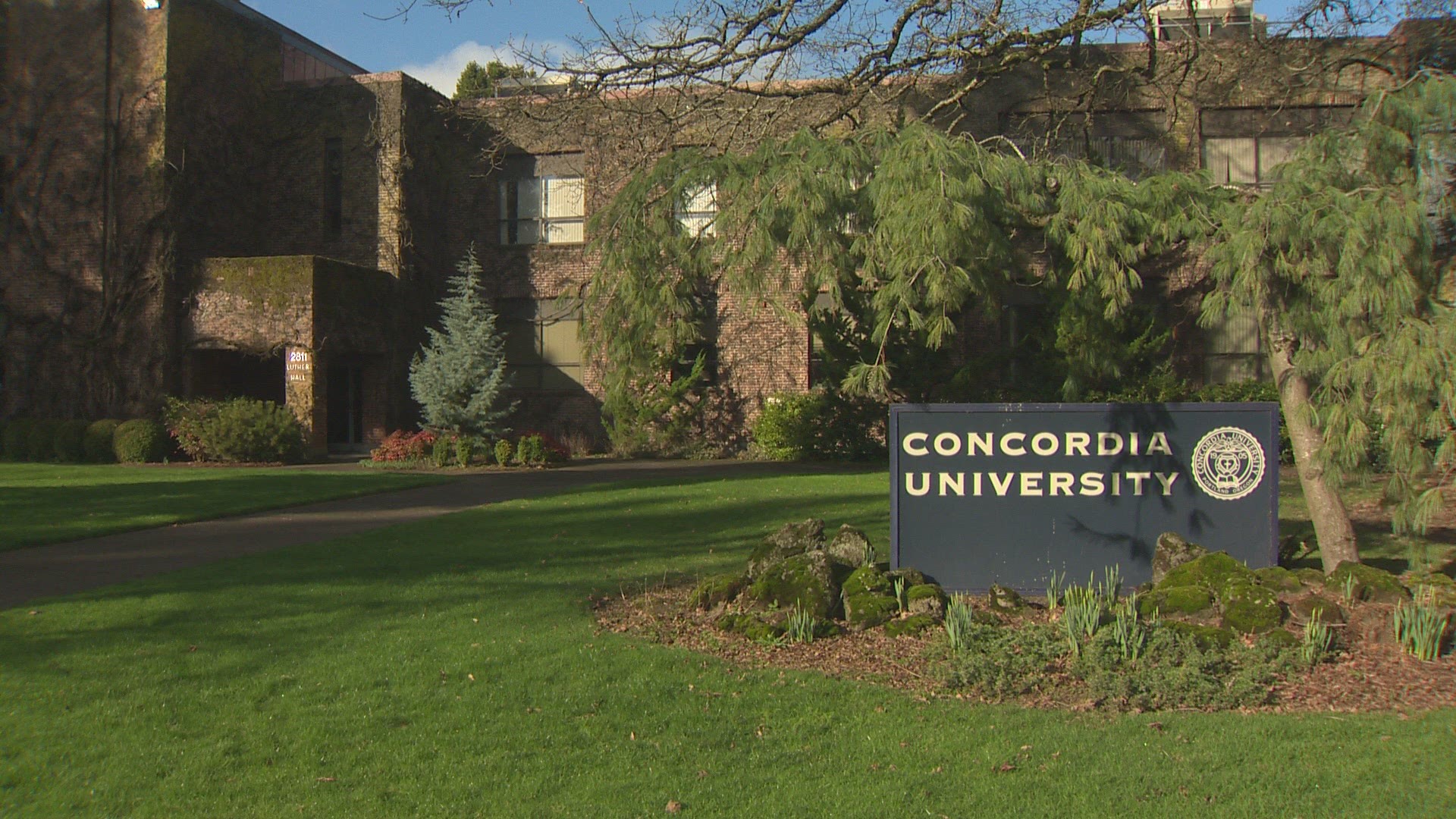 PORTLAND, Ore. — Concordia University in Northeast Portland will close its doors at the end of the 2020 spring term, according to Interim President Tom Ries.

The announcement has left about 5,000 students and 1,500 employees wondering what they'll do next.

The school traces its roots in Portland back to 1905 as a Lutheran academy for local pastors and teachers.

Now its days are numbered. It will close after graduation on April 25.

"We're going be telling folks, sadly — and it's with deep sadness — that at the end of the 2020 spring semester, which ends for us in April, that the University will cease operations as a university and begin a teach-out plan," he said.

Asked if that meant all parts of the school would close, he said yes.

Concordia offers 15 undergraduate degrees, along with graduate programs in management and English. It also operates a law school in Boise.

All will be ended.

Ries agreed it will be shocking news for many.

The school held its annual fundraising dinner at the new Hyatt Regency hotel in Portland just days ago, bringing in over $355,000 in pledged contributions. The program heralded the school's program to work with Faubion Elementary School in Northeast Portland, known as the "3 to PHD" initiative and pointed to several other efforts underway. The event was headlined by Common, an acclaimed poet, educator and writer, who praised the school's efforts.

RELATED: Should we be surprised Concordia University is closing? Maybe not.

There was no indication at the event that the school was days ahead from announcing its closure.

The Concordia University Foundation confirmed Monday that all donors at last week's fundraising dinner, which raised more than $355,000 for the school, will be offered refunds.

The Faubian School building is property of the Portland Public School District, and the district said Monday that the elementary school is not closing and will continue regular operations.

"As sad as today’s news is, we want you to know that Concordia’s pending closing will not affect Faubion’s ability to continue to serve our students and families," said Faubion Principal Dr. Karmin Williams in a letter to families.

Ries arrived in Portland just over a month ago in early January as Concordia’s second interim president.

He retired last year as the President of Concordia University in Minnesota, where he was credited with lowering tuition and increasing enrollment.

He had hopes of turning around the Portland school as well.

"I did not come here to be the bearer of this news. I came here with the intent that we would find plans to turn the situation around. But to do that would have involved so much risk it would have put the students in probably an even worse position than they are now," Ries said.

He said it would have involved trying to borrow even more money for a school that is in the red.

"Trying to borrow more money when we really don't have anybody that's going to lend us any more money, taking a shot at trying to increase enrollment when we have limited resources to do that. Those kinds of things where you're really rolling the dice and I think the board felt the odds were better to not do that and create even a worse situation," Ries said.

Ries said Concordia had 8,000 students four years ago and only 5,000 now. According to the school's website, 98% of students get some sort of break on tuition.

Concordia in Portland is losing money.

"Yes, no question about that," Ries said. "It has had negative cash flow for quite some time and its assets and its liabilities are out of balance."

Ries said the primary lender is an agency of the Lutheran Church and that while they have been generous, they are no longer willing to loan Concordia money.

Ries said raising tuition or cutting salaries or both is not an option.

"Been done, been tried. Cutting salaries, you know the folks around here have been through that more than they should," he said.

The closure will result in approximately 1,518 layoffs, according to the Office of Workforce Investments and the Higher Education Coordinating Commission.

The president said Concordia will help students transfer to other schools for next year, and that faculty and staff will be told about their options in the upcoming weeks.

RELATED: Concordia University athletes working with coaches to find their next team

It is expected then that a buyer will be sought, the statement read.

Portland State University released a statement Monday saying it's committed to provide any needed assistance to the university and its students.

And so after 115 years, Concordia University's days in Portland are numbered.

Ries agreed the decision and announcement feels like someone has died.

"Oh for goodness sakes, absolutely. There is so much grieving," he said.

The KGW Facebook community has a lot of questions and comments.