An attorney for the victims claims the officer was doing twice the posted speed limit and was in a rush to get back to the police station for the end of his shift. 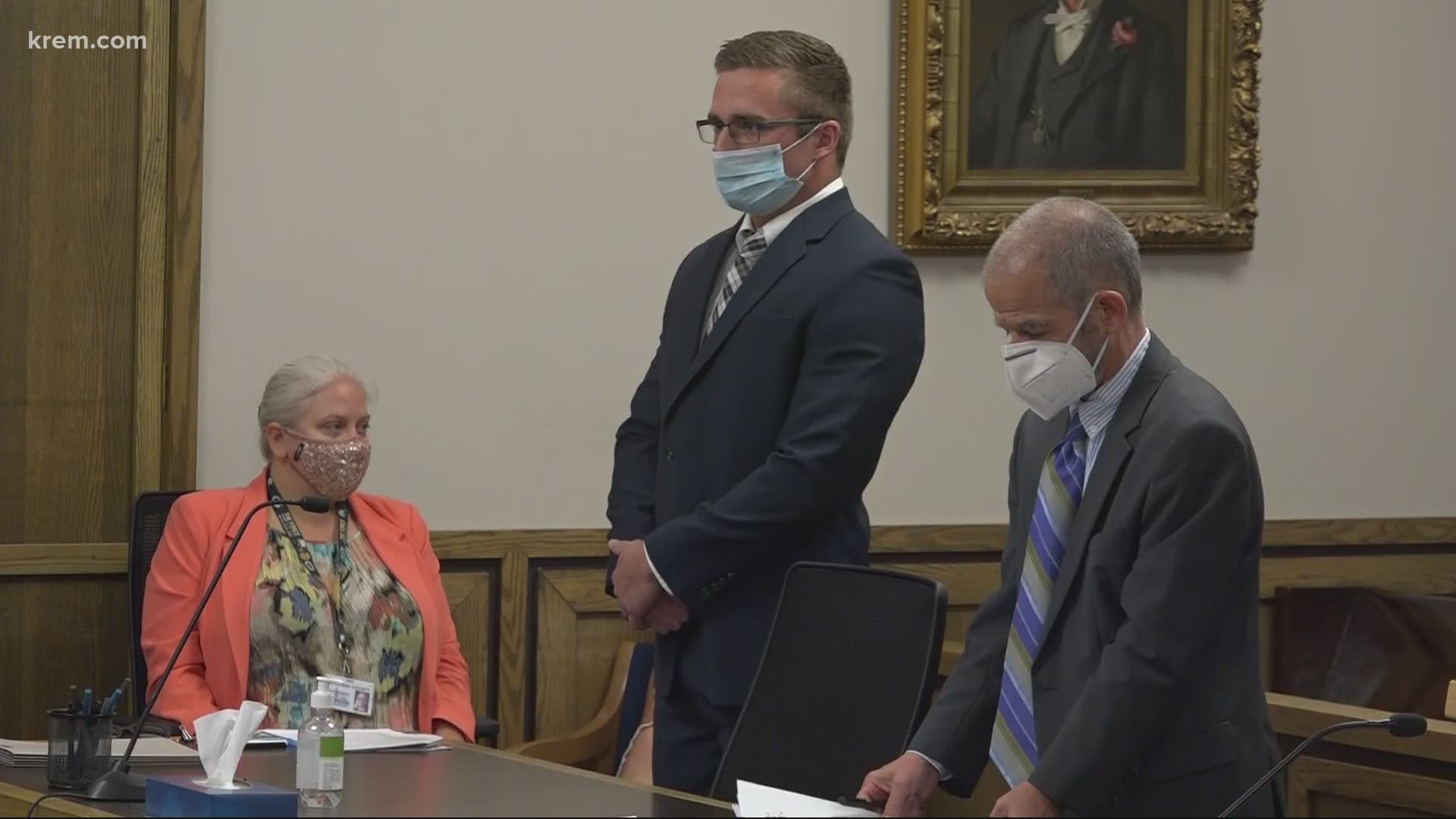 SPOKANE, Wash. — CORRECTION: A previous version of this story stated that Officer Michael Brunner plead guilty to the charges, which was incorrect.

An officer with the Spokane Police Department who is charged with vehicular assault appeared in court Wednesday morning.

Officer Michael Brunner plead not guilty to two counts of vehicular assault at his arraignment. The charges stem from a crash in March.

An attorney for the victims claims the officer was doing twice the posted speed limit and was in a rush to get back to the police station for the end of his shift.

According to Spokane Police spokesperson Julie Humphreys, Brunner was driving northbound on Lincoln Street while on-duty when he collided with a civilian crossing east to west across Lincoln Street using Fifth Avenue. The civilian's vehicle then hit a nearby parked car, according to Humphreys.

Humphreys told KREM 2 Brunner was not headed to an emergency call when the crash happened and was headed back to the police station for the day.

Spokane police asked the Washington State Patrol to conduct an investigation the same day after the department recognized their could possibly be criminal charges due to the crash, according to Humphreys. Spokane County prosecutors charged Brunner with two counts of vehicular assault at the recommendation of the WSP, Humphreys said.

According to court documents, the two victims,  Lois and James Collins, both went to the hospital after the crash. James Collins fractured his clavicle, rib and sustained a right renal hematoma, documents say. Lois Collins suffered a cut on her head that required staples, according to documents.

Attorney Jim Domanico, who represents two of the victims in the crash, called SPD's statement about the crash "misleading and false."

In a press release, Domanico said Brunner was going 65 mph on Lincoln at 5th Avenue next to Deaconess Hospital, where the speed limit in 30.

"Officer Brunner was driving so recklessly not to an emergency, but simply to get to the police station as his shift ended," the press release says.

Domanico said his clients sustained "substantial injuries that will impact them for years to come."

He claims Spokane police were attempting to cover up Brunner's actions and officers initially ticketed Mr. Collins for the crash rather than beginning a criminal investigation into Brunner.

"It was only when the true extent of the on-duty misconduct committed by Officer Brunner became undeniable that the Washington State Patrol investigated the Police Department's actions, had the ticket dismissed and disclosed Officer Brunner's actions to the Spokane County Prosecutor's Office," the press release says.

Julie Humphreys with SPD denied the allegations of a cover-up attempt regarding Officer Brunner's liability in the crash.

"There was no cover-up or attempt to sweep anything under the rug regarding Officer Brunner’s liability in this accident. That is an absolute false allegation," she wrote to KREM.

The couple was issued a ticket based on initial officer response to the crash and a determination that Officer Brunner had the right-of-way, Humphreys added.

"It wasn’t until data from Officer Brunner’s vehicle was retrieved by investigators that SPD was able to determine that speed was a factor in the accident, at which time SPD – Chief Meidl in particular – notified WSP and asked them to conduct an investigation," Humphreys said. "At the same time this information came to light, Officer Brunner was placed on administrative leave."

Humphreys said this happened within several days of the March 25 crash.

Domanico also claims Brunner refused to give a statement to WSP detectives about the crash and hindered the investigation. He believes the charges filed against Brunner are "inappropriate given the circumstances of the Officer driving twice the posted speed limit, but will also result in lower consequences and a lower amount of jail time for this felonious act."

Domanico said there are no plans to file a lawsuit against the department in connection to the crash.

Brunner was placed on administrative leave by the department but, as of this week, he has been laid off pending the outcome of the criminal case,  Humphreys said.

Brunner was hired by SPD in July 2016. He is a patrol officer on the TAC team.