Nathan R. Nash, 36, is charged with second-degree rape, third-degree rape and official misconduct after he allegedly violated a woman during an investigation. 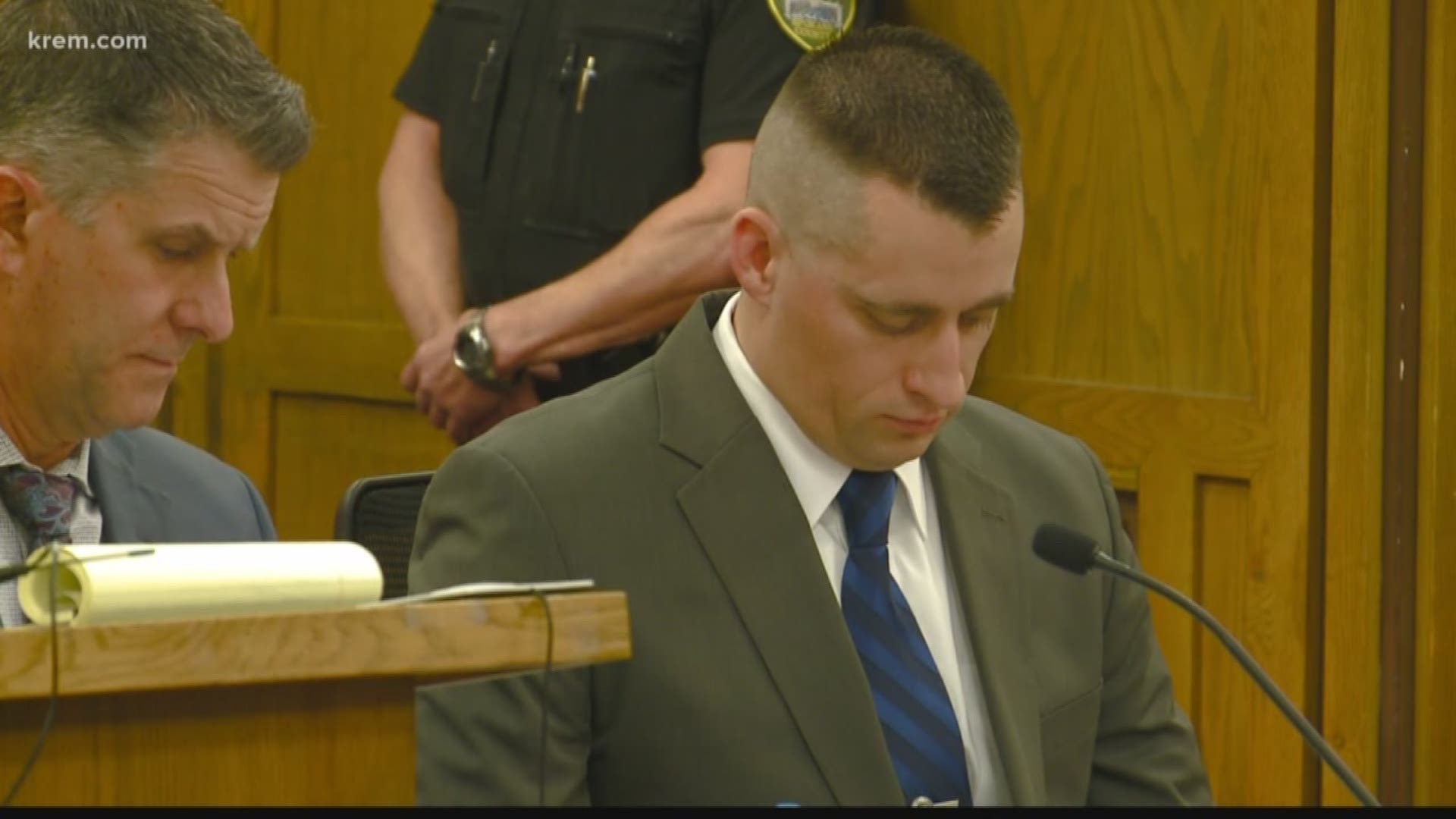 SPOKANE, Wash. -- A Spokane police officer arrested for rape has now been accused of inappropriate misconduct by three women, according to court documents.

Documents also show the officer turned off his body camera and tracking software while he was at the victim's home.

Officer Nathan R. Nash, 36, is charged with second-degree rape, third-degree rape and official misconduct after he allegedly violated a woman during a domestic violence investigation. He has not been charged in relation to the other two allegations.

Nash was booked into jail on Friday afternoon. He was then released on an unspecified date, according to the Spokane County Inmate Roster. Nash was released without having to post bail.

Nash pleaded not guilty to all charges in court during his arraignment on Tuesday afternoon.

A judge upheld the $0 bond and allowed Nash to be released on his own recognizance. The judge also imposed a no-contact order with the alleged victim.

RELATED: Why some people charged with rape don't have to post bail

Sexual Assault Unit Detectives opened an investigation into Nash on Oct. 23. The complaint was initiated by a female victim of a crime Nash was investigating, according to documents.

Spokane police requested the sheriff’s office conduct an investigation due to the charges. Nash was placed on administrative leave during the investigation.

According to Spokane Police Sergeant Terry Preuninger, Nash was hired as a lateral police officer by the department in 2018, having been employed the prior 13 years by a federal law enforcement agency.

New court documents reveal that three women allege Nash was inappropriate with them, including a second alleged victim of domestic violence.

The affidavit of facts was released on Tuesday. It contains the original complaint, two additional complaints and an interview with Nash.

The original complaint that Nash faces charges for stem from a domestic violence investigation. The victim alleges Nash put his fingers inside of her vagina while he was supposed to be examining her bruises.

The victim said Nash came to her home to investigate a domestic dispute between herself and her ex-boyfriend where he tried to choke her, documents say.

According to court records, the victim had injuries and was examined at a hospital. She took photos of her bruises and contacted Nash, who was assigned to investigate the dispute.

The victim alleged that Nash asked if there was a "private place" to "go over" the bruises on her body. She suggested they meet at her apartment. She asked Nash to wait until her mother got home, but he asked to meet before her mother arrived, records say.

According to court records, the victim showed Nash photographs of her bruises while pointing to the bruises on her arms and neck, and told him about bruises on her hip while lowering her pants a bit to show him.

"[Nash] told her to take her pants 'all the way down' and bend over the bed, which she complied because he was a police officer," records show.

Nash then allegedly asked her to pull her underwear down as well, and put his fingers in her vagina "for about 30 seconds."

"Upon being penetrated, she 'panicked internally,'" records said. The victim said she stopped the interaction but Nash then asked about bruising on her chest and neck. "She believed he was trying to get her shirt off and did not take off her shirt," documents said.

The victim said Nash did not document any of her bruises or take the photos she recorded earlier and gave her an "awkward side hug" before leaving, documents say.

The victim told her mother, father and friend about the allegations, documents show. She then submitted to a sexual assault examination kit.

The victim "described the rape as 'the worst thing that has ever happened to me,'" records show.

Two other women have accused Nash of inappropriate conduct, including a volunteer at the police department, according to court records.

One woman said she also reported a domestic violence dispute and Nash responded to investigate. She said Nash gave her his personal cell phone number and then sent her messages "complimenting her body, asking to meet, friended her on Facebook and asked for photographs, 'liked' her posted boudoir/lingerie photographs," court documents say.

The woman said she felt Nash was "creepy" and wanted to start a relationship with her.

Another woman, who is a volunteer at the Spokane Police Department, alleged Nash sent her inappropriate text messages that included offering a "pat on the butt," documents said.

According to court documents, Nash allegedly sent the volunteer "a string of messages... in a Jeopardy theme [that] said, 'Things I would like to do to you for $600' then 'This will make you wet' and 'Answer: what is a naked back rub?'"

The woman made a complaint after seeing the original victim's story in the news.

Nash turned off tracking software in his vehicle and his body camera while he was at the victim's apartment, which went against protocol, documents show.

According to an information technology specialist who works at the police department, Nash turned off the tracking software in his vehicle at Oct. 23 at 10:39 a.m., before he visited the victim's apartment, and turned it back on at 11:13 a.m.

Nash said he did not remember if he closed the tracking software but said he "commonly must reboot because he has tracking issues," documents said.

The IT specialist said he searched 30 other police computers and found none suffered "reporting of system errors" like the ones described by Nash.

Although Nash's tracking software was turned off for about 35 minutes, an iPhone app GPS located Nash at the victim's apartment during that period.

Nash also admitted to turning off his body camera when he visited the victim, citing "privacy concerns and the sensitive nature of the issue."

“People like to be more open when they’re not on camera, so people’s actions and/or behaviors, things they want to talk about, can change depending on whether or not they’re being videotaped,” he told detectives.

"There's no way I'm gonna know all the content of that," he told detectives.

The second woman who accused Nash of inappropriate conduct said he turned off his body camera before giving her his cell phone number, and the third victim gave detectives a text message from Nash that said, "I just say exactly what’s on my mind… unless I’m on body camera.”

Nash told a detective the victim pulled down her pants and underwear to show him her bruises and then took his hand and placed it on her vagina. He admitted his fingers went into the victim's vagina, records say.

"I was like, my hand feels weird and I look and I see where she had now put my hand and I pulled it back," Nash said, according to court records.

Nash admitted to giving his phone number to the victim.

Nash also said he was not wearing his body camera but said the victim asked their conversation not be recorded due to privacy concerns.

After the incident was reported, a search warrant was issued for Nash, his clothing, uniform and anything attached to it, notebooks, pens, recorders, phones, tissues and items in his pocket for DNA to compare to evidence from the sexual assault kit.

“The alleged conduct is completely unacceptable and in absolute conflict with the high standards of the Spokane Police Department. Our men and women took an oath to protect and serve the community in which we live.  We will not shy away from that oath and it will be upheld.  Our officers are committed to serving our community every day with dedication, honor and professionalism.  We cherish the trust the community places in us and will continue to work every day to earn and maintain that trust.

“I would like to thank those who demonstrated great courage by coming forward and bringing these allegations to light.”