In the video released eight months after the arrest, a Spokane officer can be heard saying, "I'm going to put a bullet in your brain." 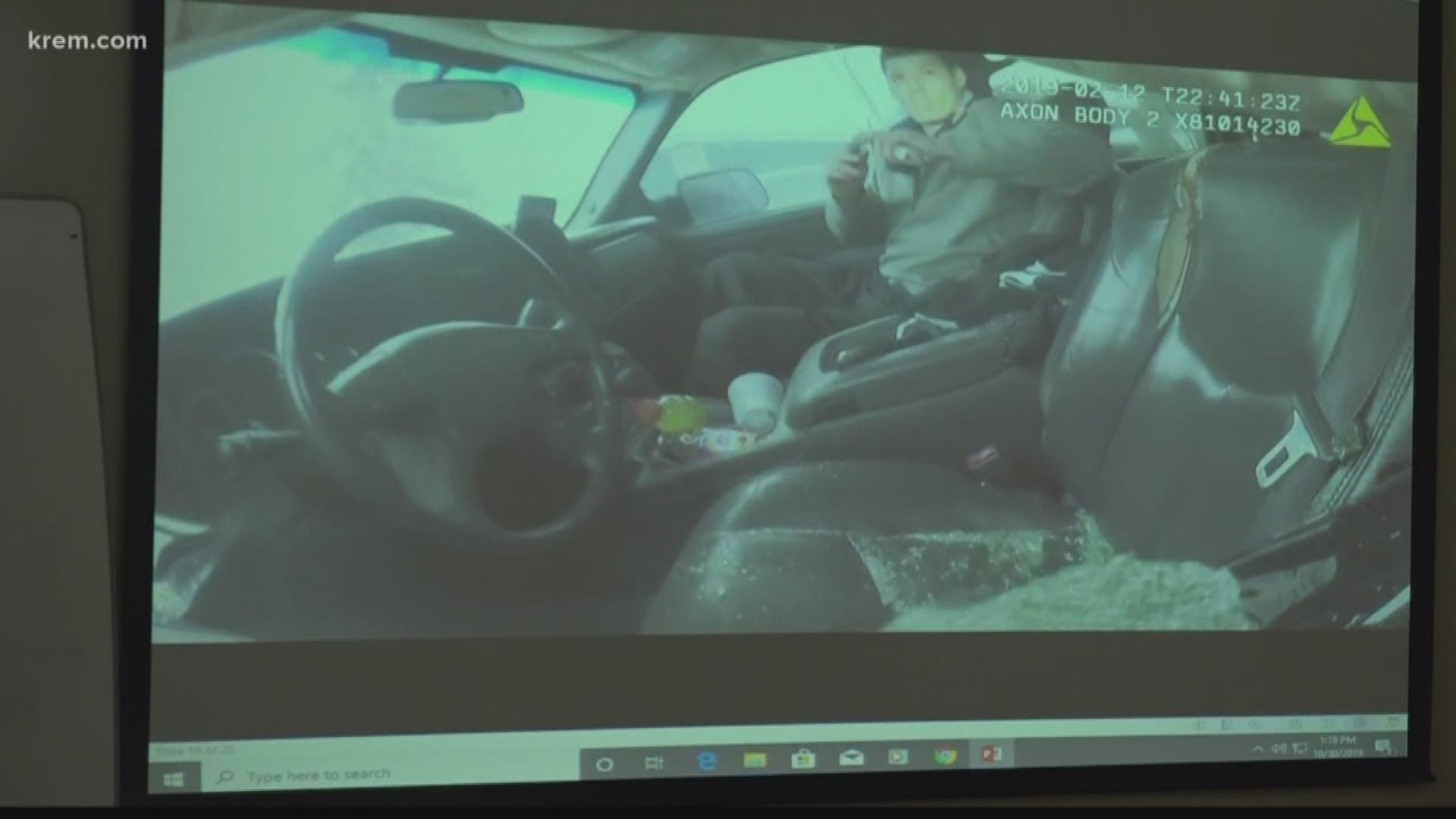 Warning: The body camera videos in this story contain strong language and content that may be graphic to some viewers.

SPOKANE, Wash. - The Spokane Police Department released body camera footage from a controversial arrest in Feb. 2019 during a press conference on Wednesday.

The body camera footage is from the February arrest of then 28-year-old Lucas Ellerman. The arrest involved the use of a K9 in the enclosed cab of a pickup truck, according to documents.

The Internal Affairs investigation found that K9 officer Dan Lesser violated policy when he didn't start his body camera at the start of the chase and in his language and demeanor in speaking with Ellerman. Officer Mark Brownell was also found to have violated body camera policy.

Neither Lesser, Brownell or Scott Lesser were found to have violated use-of-force policy in pointing a gun at Ellerman, the Spokane Police Department found.

The body camera footage from two of the officers - K9 officer Dan Lesser and Mark Brownell - don't have audio for the beginning of the chase due to the officer not activating the camera, said Spokane Police Capt. T.J. Hendren.

The camera recorded due to the mode it was in before it was turned on by the officers, which allows it to record video but no audio.

Hendren said this was not in line with the department's policy for the usage of body cameras.

The body camera footage also shows Lesser telling Ellerman, "I'll f------ kill you," "I'll f------ shoot you," and "I'm going to put a bullet in your brain" at different points of the altercation.

Hendren said this was also a violation of policy. The department has yet to announce the disciplinary action that will be taken against Lesser. He also said Lesser was obligated to warn of an escalation of force.

Smoke is seen coming up from the tires of Ellerman's truck as he tried to get away from the snow bank and the patrol vehicle that had him pinned.

After getting out of the vehicle, Lesser broke out the driver's side front window in the truck with a baton. Ellerman was sitting in the driver's seat but moved to the passenger seat while holding a pack of cigarettes.

Lesser was found to be out-of-policy in his demeanor due to his use of language, which will lead to discipline from the chain of command, Hendren said.

Ellerman can be heard yelling to the officers, saying, "Please get him off," and "Get your dog. Get him off of me."

After being removed from the truck, Ellerman can still be heard yelling. Although an affidavit by Scott Lesser said he punched Ellerman two to three times while on the ground, the video shows at least five punches thrown by Scott Lesser.

Dan Lesser can be heard telling Scott, "Wait, relax, we got him," after he starts punching Ellerman.

As the officers were searching Ellerman on the ground, Ellerman can be heard wincing and asking officers not to touch a spot where the dog had bit him. The officers also administered first-aid.

As the officers took Ellerman to the back of a patrol car for another search, blood can be seen on Ellerman's face, but the extent of his injuries was unclear in the video.

Dan Lesser asked Ellerman why he said he had a gun during the stop, to which Ellerman replies he said so the officers would shoot him.

Ellerman then asks Dan Lesser why he didn't shoot him, to which Lesser replies, "I didn't feel like killing anyone today, is that OK?"

When asked about the use of the K9, Hendren said while they don't want to see a dog hurt, they can be used to help alleviate a dangerous situation for an officer.

"I hate to see that we want to see our K9s hurt. but that's the purpose of our K9s," Hendren said about using K9 units in dangerous situations.

According to an affidavit written by Officer Scott Lesser, police began watching a house at 813 S. Park St. on Feb. 11 after they received information that Ellerman, who was wanted on charges including second-degree strangulation and multiple assault and theft charges, was at the house.

After a silver Chevrolet Silverado driven by a man other than Ellerman left the residence, then Lessers and Brownell followed the Silverado driving westbound on 8th Ave., according to court documents. Dan Lesser was in an SUV while Scott Lesser and Brownell were in a truck.

Scott Lesser said in the affidavit that he could see through the back window of the truck and it didn't appear there were any passengers before they began attempting to pull over the truck at 8th Avenue and Havana Street. The truck slowed but refused to stop, and turned eastbound on 5th Avenue, according to the affidavit.

Once the truck stopped, the two officers in the truck had the driver get out of the truck with keys and walk toward them, according to the affidavit. Before the man driving the truck got out, Scott Lesser said he saw him throw blankets and coats over the passenger seat in the truck, leading him to believe Ellerman was hiding in the truck.

Once pinned, Ellerman attempted to free the truck, which was stuck between the police SUV, the police truck to the rear, a snow bank to the front, and two parked vehicles to the other side, according to the affidavit.

Scott Lesser said in the affidavit that he then broke out the rest of the driver's side window with a baton before moving to the passenger side of the window. Dan Lesser then yelled that Ellerman had a gun, and another officer said he could see Ellerman reach for his front waistband, as if to grab a firearm. Ellerman then jumped into the back seat of the truck.

At this point, Dan Lesser instructed Scott Lesser to retrieve his K9 from his patrol SUV, according to the affidavit. The other officer said he then lifted the dog into the driver's side window..

The officers said they eventually pulled Ellerman out of the truck using the front driver's side window, according to the affidavit. Ellerman reached for his waistband multiple times after exiting the truck, which caused the officer to punch him two to three times in the head an attempt to control the situation and prevent Ellerman from reaching a firearm.

Scott Lesser said he sustained "several cuts" on his hands from the incident. Ellerman was taken to the hospital after the arrest due to the fact he told the officers he had ingested heroin, according to the affidavit.

A substance found on Ellerman tested positive for heroin.

Hendren said during the press conference that Ellerman had lied about ingesting or overdosing on heroin.

In addition to a number of previous charges Ellerman faced, he also was charged with eluding police and possession of a controlled substance - heroin.

Ellerman is currently serving a sentence of 70 months in the Airway Heights Correctional Center, followed by a year of parole.

The following video is a report on the Spokane Police Department's body camera program.