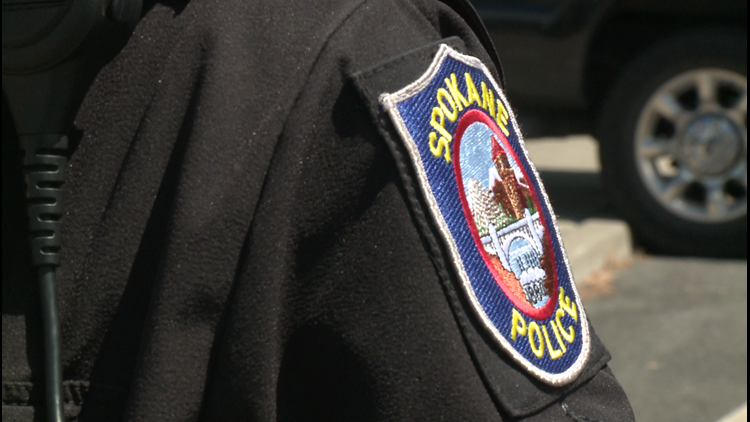 The Spokane Police Deparment logo and patch that dons the side of all uniformed officers.

SPOKANE, Wash. — Two Spokane Police officers were assaulted by disorderly men during their weekend patrol of the downtown bar district.

Spokane Police Officer John O’Brien said the men were acting disorderly in front of a bar in the 200 block of North Division Street on Sunday.

One of the men, 21-year-old Falexy Olaitiman, was standing in front of a bar security team with clenched fists while cussing and arguing with them. He had been kicked out of the bar earlier in the evening.

When an officer approached Olaitiman, he did not comply with commands, O’Brien said.

Another officer was trying to help bar security contact 22-year-old Emson Eukenio, who swung at the officer’s head, O’Brien said. The officer moved his head to avoid being struck, and pushed Eukenio away while warning him that he would be arrested if he continued to assault an officer.

Eukenio approached Olaitiman and told him not to comply with the officers, O’Brien said. Both of the men tried to walk away and did not comply with commands to stop.

Both men ran from the officers who told them they were under arrest, O’Brien said.

Olaitiman ran toward an officer whose back was turned and punched him on the back. O’Brien said the officer took him to the ground and into custody after a struggle.

Officers then heard people shouting and saw a large group of people running north on Division. When they arrived at the area, they found Eukenio swinging both fists while on top of an officer, O’Brien said. A large group was surrounding them.

A taser was deployed to stop Eukenio after attempts to pull him off of the officer were unsuccessful, O’Brien said. Eukenio then placed both hands under his stomach near his waistband and refused to remove his hands.

After several instructions to place his hands behind his back, Eukenio continued to resist and a Taser was deployed for a second time, O’Brien said. Officers were then able to place Eukenio in handcuffs.

Both men were taken to the Spokane County Jail and booked on various charges.

Third violent incident in downtown bar district in one week

A week before this incident, two suspects were arrested in connection to a shooting on Sprague Avenue in downtown Spokane’s bar district on Oct. 27. Two people were injured.

On the same night, police said there was a fight outside of Borracho Tacos and Tequileria where the man pulled a gun and fired one round. No one was hit and police do not believe the man fired the gun at a specific person.

Borracho Tacos and Tequileria issued a statement on their Facebook page saying they were "disappointed and alarmed" to hear about what happened.

Police told KREM that it appears the two shootings were not related.