Candy Rogers went missing on March 6, 1959 while selling campfire mints. Spokane police revealed the man responsible for her death in a press conference on Friday. 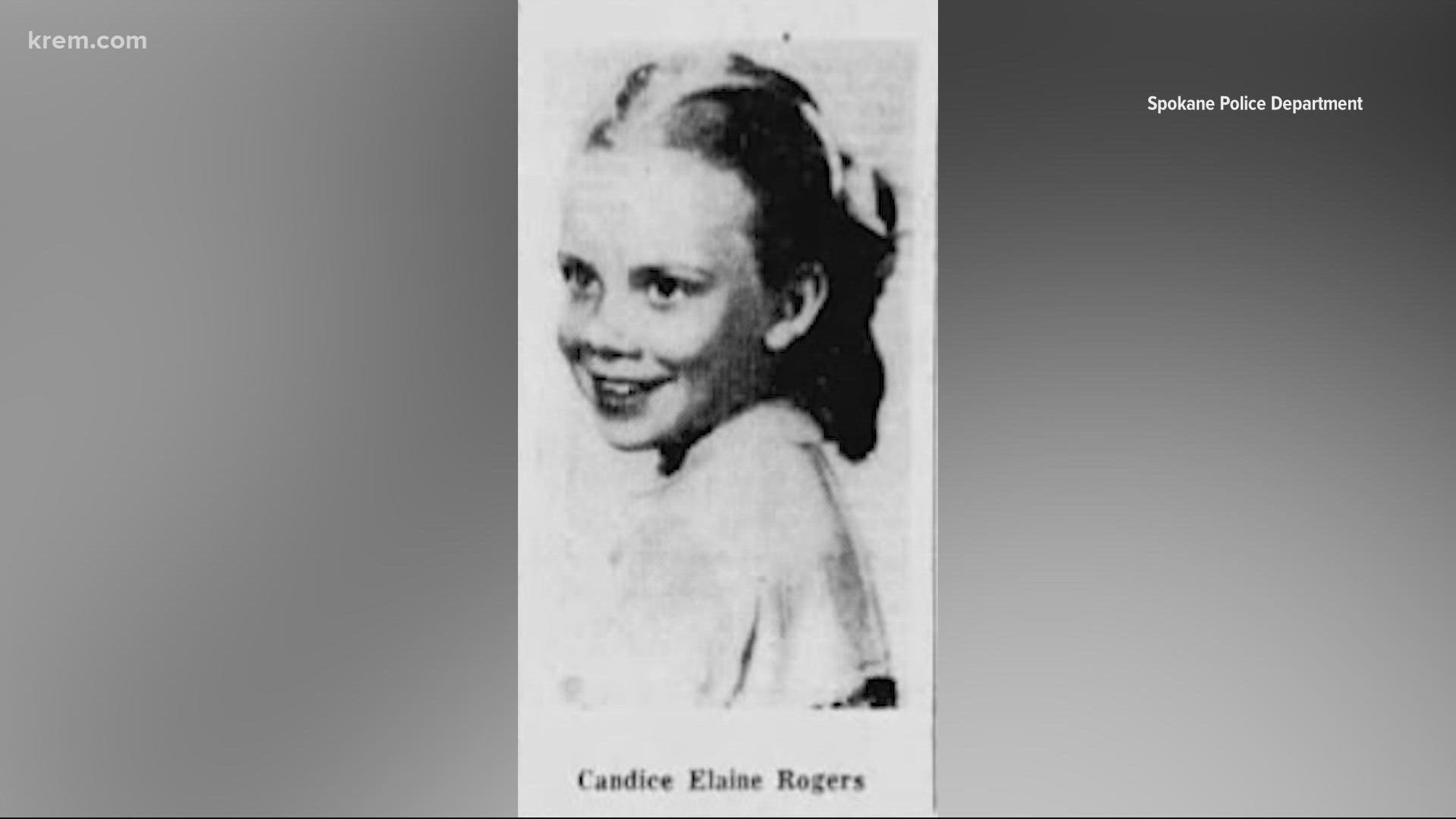 SPOKANE, Wash. — Warning: This story contains graphic details about violence toward a child.

Spokane police say they know who is responsible for the 1959 killing of 9-year-old Candy Rogers, making it one of the oldest cold case murders solved in Washington state.

Candy Rogers was a member of the Blue Birds, which were younger members of Camp Fire Girls of America. The 9-year-old girl set out from her home in the 2100 block of West Mission Avenue in Spokane at about 4 p.m. on March 6, 1959 and was never seen again.

“This is kind of the case that's been the giant log jam for cold cases. And in Spokane...I keep saying it's the Mount Everest of our cold cases, the one that we could never seem to overcome. But at the same time, nobody ever forgot," Spokane Police Department (SPD) Major Crimes Detective Zac Storment said during a press conference on Friday.

By 9 p.m. on March 6, volunteers had found a trail of Camp Fire mints boxes that led south across the Ft. George Wright Bridge. On the morning of March 7, all of Spokane was aware of the situation, police said during a press conference on Friday, Nov. 19.

Three airmen from Fairchild Air Force base were killed while searching for Rogers after their helicopter hit power lines. Two others were saved.

After 16 days of searching, two airmen from Fairchild were hunting off Old Trails Road, northwest of Spokane, and found Rogers' shoes on March 21, 1959. A search of that area found her body concealed in a pile of pine needles and tree boughs.

Candy Rogers' cause of death was ruled as strangulation and her autopsy showed "obvious signs" of sexual assault, Spokane police said. Her feet had been bound by a strip of her clothing and another strip of clothing was used as a ligature around her neck.

Over the next four decades, hundreds of tips flooded into police from people throughout the United States. In the early and mid-2000s, detectives began to reexamine forensic evidence in the case. A private forensic lab declined the case in 2020, citing degraded DNA.

Cathie, John Reigh Hoff’s daughter, came to SPD and volunteered her DNA to help the investigation after learning that her father was a suspect in Rogers' murder. Brittany Wright, a forensic scientist with the Washington State Patrol, concluded on Sept. 8, 2021 that Rogers' DNA is 2.9 million times more likely related to the suspect DNA profile than the general population – strong evidence of paternity.

A search warrant was then executed on John Reigh Hoff’s grave on Sept. 23, 2021, Spokane police said. Wright then said the DNA test allows authorities to conclude that the DNA found on Candy’s body is that of John Reigh Hoff.

Watch parts 1 and 2 of the SPD press conference below:

What we know about John Reigh Hoff

John Reigh Hoff was born on Aug. 11, 1938 and grew up on the 2500 block of West College Avenue, Spokane police said. He entered the Army at 17 and was assigned to the Nike Missiles site protecting Fairchild Air Force Base. John Reigh Hoff lived at 2211 W. Broadway Ave. on March 6, 1959, the day Rogers disappeared.

Hoff had a petty juvenile record and a 1961 arrest and conviction for second-degree assault, police said. He died by suicide in 1970. His 10-year-old sister was Candy Rogers' "big sister" in the Camp Fire Girls organization, police said.

Credit: Spokane Police Department
John Reigh Hoff is accused of killing Candy Rogers in 1959. He died by suicide in 1970.

Detective in 2007: 'Some detective will solve this case someday'

Police said the murder rocked the Spokane community at the time. In 2007, KREM 2 News spoke to Spokane Police Detective Brian Hammond about the case.

Police said the murder rocked the Spokane community at the time. In 2007, KREM 2 News spoke to Spokane Police Detective Brian Hammond about the case.

"It really changed the way Spokane worked back then and how children were allowed to run free or not," Hammond said 14 years ago.

Hammond showed KREM 2 the binders and boxes full of tips, reports and statements. They had preserved evidence and repackaged some of it for protection. They even had a pair of Rogers' shoes that were found near her body. At the time, Hammond was confident that DNA evidence would help solve this case.

"Some detective will solve this case someday," he said.