Shannon Bruga is facing 39 charges in the California case, including felony child abuse, sexual assault, and providing alcohol to minors. 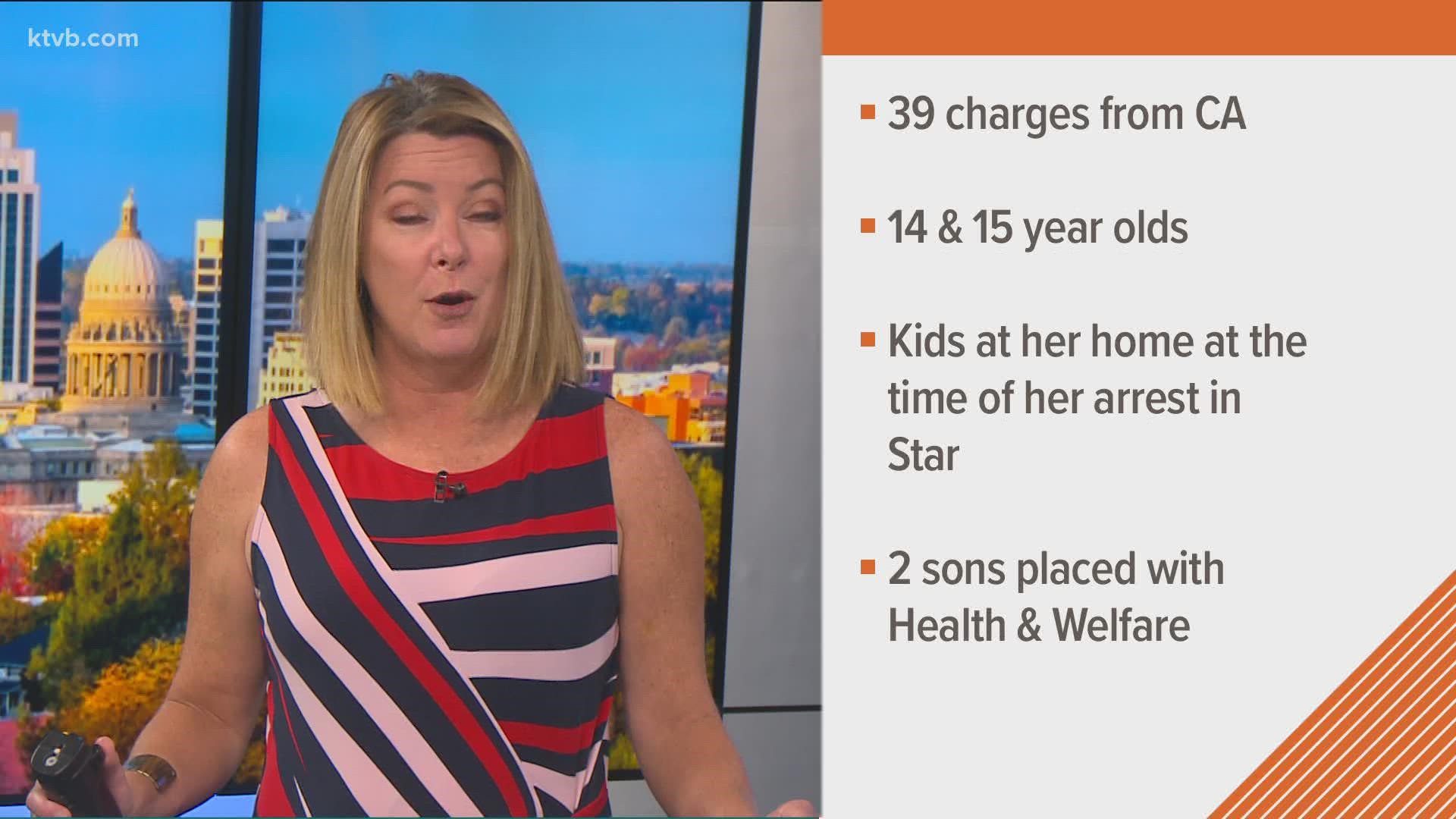 STAR, Idaho — A woman accused of throwing drunken parties at which she encouraged underage teens to have sex with one another in California was arrested Saturday at her new home in Star.

Shannon Bruga, 47, is being held without bail in the Ada County Jail on a fugitive warrant in the California case. Detectives say, however, that Bruga may have held similar gatherings for teenagers in Ada County after moving to Idaho.

Bruga is facing 39 charges in the California case, including felony child abuse, sexual assault, and providing alcohol to minors.

According to the Santa Clara District Attorney's Office, Bruga "threw drunken parties for young teenagers where she encouraged sex acts, sometimes non-consensual, and sometimes while she watched." Many of those in attendance were 14 or 15 years old, and friends of Bruga's teenage sons.

The house parties at Bruga's Los Gatos home happened between summer 2020 and earlier this year. According to the district attorney, the 47-year-old provided children with condoms, vodka, and Fireball whiskey and told them not to tell their parents about what they were doing. At one party, she instructed underage partygoers not to call for help after an intoxicated and vomiting 14-year-old lost consciousness, officials say.

On several occasions, prosecutors allege, Bruga would send Snapchats or text messages to teenagers in the middle of the night, telling them to leave their homes and come to her house to drink alcohol. She also pressured several young girls into performing sex acts on boys, prosecutors say, and encouraged sexual activity even when the children involved were extremely intoxicated.

In December 2020, according to a statement of facts filed in the case, Bruga brought a 14-year-old boy into a bedroom where an intoxicated 14-year-old girl had gone to lie down. The teen girl later told police that the boy had sexually assaulted her as she cried, and that Bruga laughed when the girl confronted her about what had happened.

At another gathering later that month, according to the statement of facts, Bruga watched and did not intervene when a different 14-year-old girl tried to escape from an intoxicated boy who was groping her.

Investigators say Bruga also allowed an underage, unlicensed teen to drive her SUV around the high school parking lot while other teens held on to the back. When a boy fell off the moving vehicle and was knocked unconscious, according to the statement of facts, she did not take the child to the hospital or tell his parents what had happened to him. Later, she instructed several teenagers to lie about how the boy had gotten hurt, officials say.

“It took a lot of brave children to come forward and to untangle this deeply disturbing case,” Santa Clara District Attorney Jeff Rosen said in a press release. “As a parent, I’m shocked. As the DA, I’m determined to hold those adults who endanger children fully accountable to the law and our community.”

Bruga moved from California to Star this summer.

The Ada County Sheriff's Office began investigating after a local family, who had originally connected with Bruga over the Internet, learned she was moving to town and contacted Idaho law enforcement. The family said they had tried to cut off communication with the woman after learning about the allegations in California, but that Bruga had begun harassing them.

Santa Clara prosecutors issued a warrant for her arrest last week. When Ada County Sheriff's Office deputies went to Bruga's Star home to arrest her on Saturday afternoon, they found ten underage boys and two girls in her home. Most of those children had spent the night there, officials say.

Bruga's two teenage sons were declared to be in imminent danger, and have been placed into the care of the Idaho Department of Health and Welfare. The other children were released to their parents.

The sheriff's office says investigators suspect Bruga has held similar parties for Idaho teens over the last several months. Anyone with information is urged to call 208-577-3704 or send an email to ahagemanturner@adacounty.id.gov.