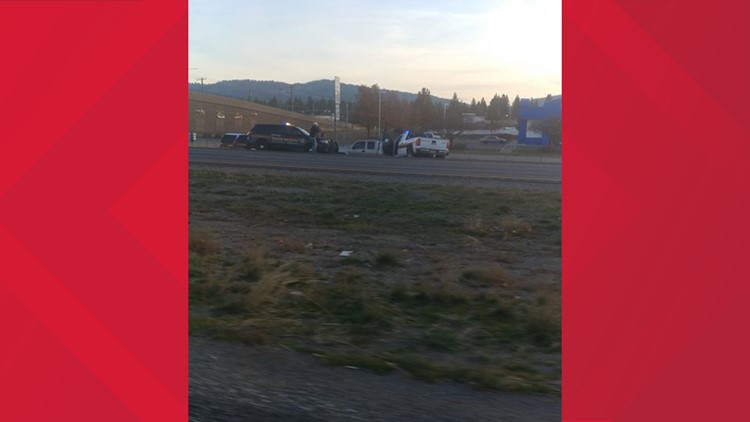 Photo by: KREM
I-90 police chase

POST FALLS, Idaho — A man with an arrest warrant for felony stalking was arrested Thursday afternoon following a police chase on I-90 through Coeur d’Alene into Post Falls.

According to a press release from Kootenai County Sheriff’s Lieutenant Ryan Higgins, deputies were at the courthouse Thursday waiting for Jacob S. Frey, 37, from Newport, Washington. He said Frey failed to appear for court and a judge issued a bench warrant for his arrested.

Higgins said Frey’s car was spotted in the parking lot of the courthouse and it was reported he was upset by patrons. He said as deputies approached the car, the car began to pull away and deputies attempted a traffic stop.

Near I-90 and Highway 41, Higgins said the car crossed the median and started going westbound in the eastbound lane. The car came to a stop at Greensferry and I-90.

Deputies found a loaded AR-15 style rifle in the car next to where Frey was sitting, Higgins said.

Frey was taken to Kootenai Health for treatment of his dog bite and transported to the Public Safety Building.

Three Kootenai County vehicles were damaged in the pursuit and there was one report of a civilian car damaged on Northwest Blvd. No injuries were reported.

Traffic on I-90 was backed up for several miles in each direction while emergency personnel were working the scene.