According to the SCME website, Osborn died as a result of a gunshot wound to the head.

Deputy Skye Ortiz and Deputy Josiah Loos were both involved in the shooting.

Ortiz has been with the sheriff's office since July 2016. He served in the United States Army for eight years where he was a sergeant. He was awarded a Bronze Star and received a Purple Heart for his actions while deployed in Iraq and Afghanistan.  He served in the Military Police where he was assigned as a SWAT Team Member, Dignitary Protection, and Investigations.

In 2017, he was awarded a Spokane County Sheriff’s Office Life-Saving Award.

Loos started his law enforcement career in February when he started at the sheriff's office. He successfully completed the Washington State Basic Law Enforcement Academy and was in the second phase of his training with a Field Training Officer.

Spokane Valley Police Department Chief Mark Werner said a call came in at 9:08 a.m. from a person at an internet sales business at a business park on East Knox Avenue. The caller reported a suspicious man with a handgun in a holster on his waist who was banging on glass.

In a press release, Corporal Mark Gregory with the Spokane County Sheriff's Office said the caller said the business was not open to the public and the doors were locked. The caller said he was Osborn, who was the ex-boyfriend of the caller's current girlfriend, was intoxicated and armed with a pistol on his hip, according to Gregory.

Four minutes later, the caller said the suspect was hitting the window and began firing his weapon as deputies arrived in the area. Deputies also reported shots fired.

Gregory said the suspect was hit by deputies' gunfire and medics were requested.

At 9:14 a.m., deputies said the suspect crashed his vehicle into a tree, which was located in the corner of the business park's parking lot. The suspect was pronounced dead at the scene.

Gregory said members of the Spokane Police Department SWAT Team, who were training a short distance away, heard the call and started to respond to help.

No law enforcement officers or other civilians were injured in the incident, Werner said.

The Spokane County Medical Examiner will identify the suspect at a later date.

E. Montgomery Ave. reopened just before 7 p.m. Knox, east of Woodruff, is still closed. Drivers should use an alternate route for the remainder of the evening and possibly into Saturday morning.

Tap for the latest traffic info

According to witness accounts, the situation may have started at technology company called Johnson Controls in the Woodruff Business Park.

Employees at a business near the crime scene told KREM's Taylor Viydo they heard 10-20 shots coming from south of the scene, near the Johnson Controls building. That was followed by what sounded like a flash-bang grenade, often used by law enforcement.

They later saw smoke coming from the scene, Viydo said.

A suspect allegedly fled north toward the business park.

Another witness told KREM the suspect was seen driving his car when police shot at the car and then the suspect hit a tree.

Crime scene tape was placed around the business park on Friday morning.

SWAT vehicles and several ambulances were on scene. 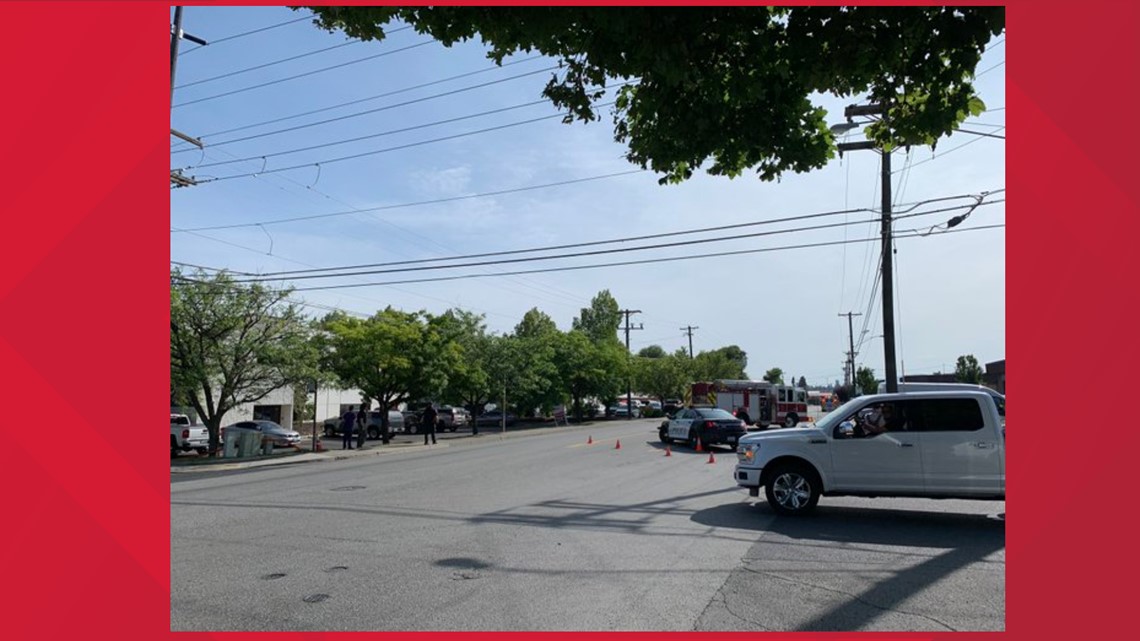 RELATED: Judge says Freeman shooting suspect will be tried as an adult

RELATED: KREM 2 has a new app, download it here