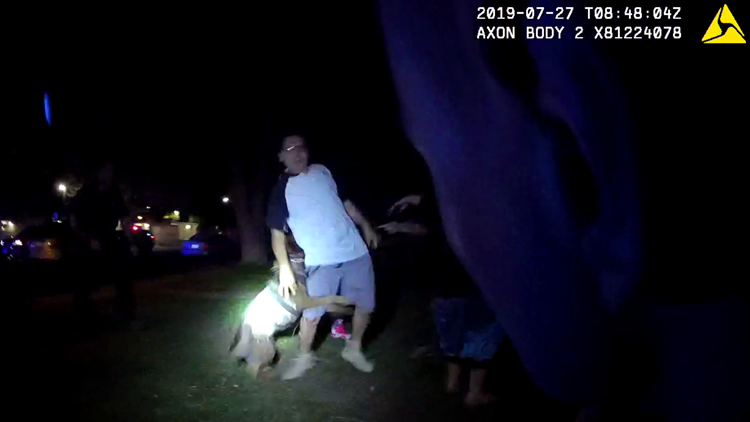 According to a Facebook post by the Moses Lake Police Department, the dog was remotely released and ended up breaking up the fight by biting a suspect.
Author: Ian Smay
Published: 11:53 AM PDT July 28, 2019
Updated: 12:18 PM PDT July 28, 2019

SPOKANE, Wash. — Editor's Note: The article has been updated to correctly reflect that Sarraraz was arrested Saturday morning.

According to a Facebook post by MLPD, two officers were attacked after they gave chase and stopped a vehicle that had recklessly driven away from a downtown bar early Saturday morning.

According to the post, Hohman was allegedly punched in the back of the head by 28-year-old Miguel Perez as Hohman and McCain attempted to arrest 18-year-old Robert Reasonable for allegedly charging them.

Stewart, who was arresting Sarraraz, released him when he saw Hohman and McCain were being outnumbered, during which Sarraraz allegedly hit Stewart in the back with a full beer can before running away, according to the post.

Moses Lake Police Department
K9 Chief ends melee, three arrested for assaulting officers Two MLP... D officers were assaulted early Saturday morning when a traffic stop turned into a brawl. It started with officers being dispatched to a downtown bar. As officers were arriving, a vehicle took off out of the parking lot at a high rate of speed, driven recklessly.

Stewart remotely released K9 Chief, also called the Force Multiplier, to assist when he saw Perez move toward Hohman a second time, according to the post.

Perez and Reasonable were charged with third-degree assault and obstruction, according to MLPD, and both were booked into the Grant County Jail.

Sarraraz was caught shortly after 6 a.m. on Saturday and was booked into the Grant County Jail on second-degree assault and obstruction, according to the MLPD.

Perez's bite was treated at the scene and two officers sustained "bumps and bruises" that didn't require further treatment, according to the post.