Gonzaga basketball coach Mark Few argued with an officer before he was placed in handcuffs and taken to the hospital for a blood draw, court records say. 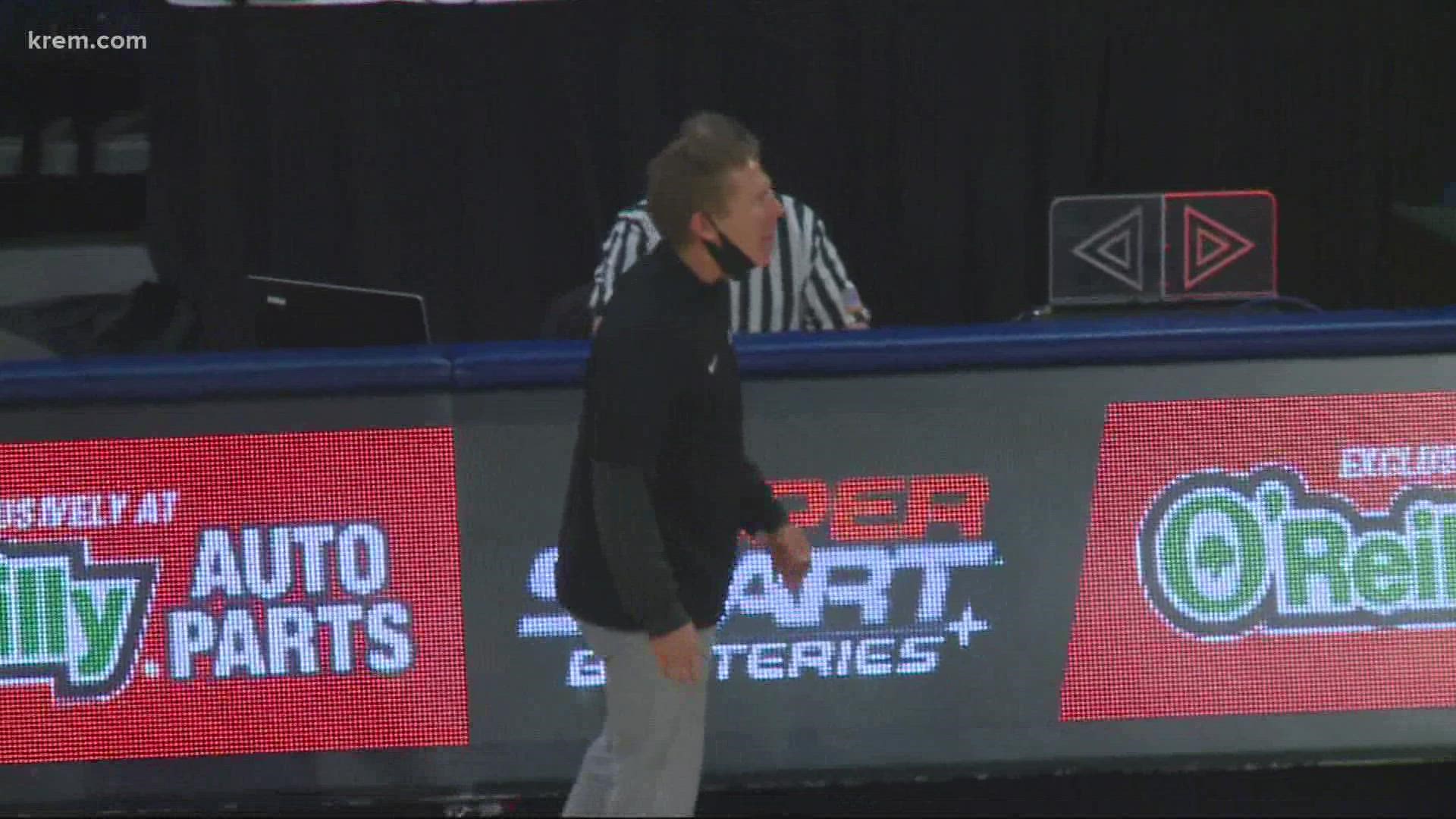 COEUR D'ALENE, Idaho — Probable cause documents say a fire captain alerted police to an erratic driver in Dalton Gardens that turned out to be Gonzaga Head Basketball Coach Mark Few.

Few was cited for DUI on Monday, Sept. 6 by a Coeur d’Alene police officer at 9 p.m. at north Fourth Street and East Hanley Avenue. Court documents say Few refused to do a sobriety test, argued with the officer, was placed in handcuffs and taken to the hospital for a blood draw.

Few's driver's license has been suspended for "failure of evidentiary testing," according to Kootenai County court records obtained on Wednesday. Records also show he waived his arraignment and pleaded not guilty.

Court records say a fire captain called dispatch when he saw an SUV "driving erratic and speeding." He continued to follow the SUV and gave dispatch updates on their location while waiting for an officer to respond.

The fire captain said the car was drifting from over the center line to over the bike lane several times, documents say. He told officers he thought the SUV was going to hit three signs before he called dispatch.

When a Coeur d'Alene police officer contacted Few, he noticed Few was having a hard time dividing his attention between looking for his documents and answering his questions, documents say.

“I could smell an odor of an alcoholic beverage while standing at the window,” the officer wrote. “Mark had watery bloodshot eyes and spoke slowly.”

The officer said Few was moving slowly and appeared to have difficulty finding his paperwork in the center console and glovebox, documents said. He also noted that Few would start a sentence and trail off, according to court records.

Court documents say Few told the officer he was leaving his vacation home at Hayden Lake and driving back to Spokane. Few said he had spent the day with family and said he hadn’t had anything to drink, according to documents.

The officer told Few he wanted him to complete a field sobriety test and Few “began arguing…about whether the tests were subjective or not,” documents show. Few said he was going to call his attorney before any evaluations were completed, according to court records. Documents said Few put his hands in his pockets several times despite the officer telling him not to do so.

Few then told the officer he’d be unable to complete the sobriety tests due to “previous ankle and knee injuries” and ultimately refused to do the tests, documents say.

Documents said Few told the officer he is the basketball coach at Gonzaga University and said he had no other injuries. Then, documents said Few admitted to having two beers and the last beer was finished about four hours prior.

Few called a friend to pick up his car and dogs, documents say. Few then asked for an independent blood draw and the officer took him to Kootenai Health to obtain one, documents say.

The officer was then directed by his supervisor to release Few from custody and give him a citation, documents say. Then, Few was picked up from the hospital by a friend.

"I believe as a leader and role model, I am expected to set only the best example," he said. "The decisions I made yesterday do not exemplify this standard and for that, I sincerely apologize to you all. I recognize that operating a motor vehicle after consuming any amount of alcohol exhibits poor judgment.

"Regardless of the outcome of the pending investigation, I will never allow such a lapse in judgment to occur again. Please know that I am committed to learning from this mistake and will work to earn back your trust in me.

"I deeply regret disappointing any of the members of the community, the young men and women who comprise my campus community, and the University as a whole. In particular, I am sorry for the hurt that I have caused to those more important to me — my family, my players and my program.

"I am exceedingly grateful to those who continue to offer support to me, especially my wife and children. Thank you."

“We are aware of the report that Coach Few was cited for suspicion of driving under the influence," Standiford said. "While the facts of the situation are still being evaluated, we understand its severity and the legal process that will follow. As a Gonzaga employee, we respect Coach Few’s right to privacy and will refrain from further comment at this time.”

Few, who has guided Gonzaga to the NCAA tournament in each of his 22 seasons as coach, is the winningest active coach by percentage at .834 (630-125). Under Few, the Zags have appeared in the national championship game twice, in 2017 and 2021.