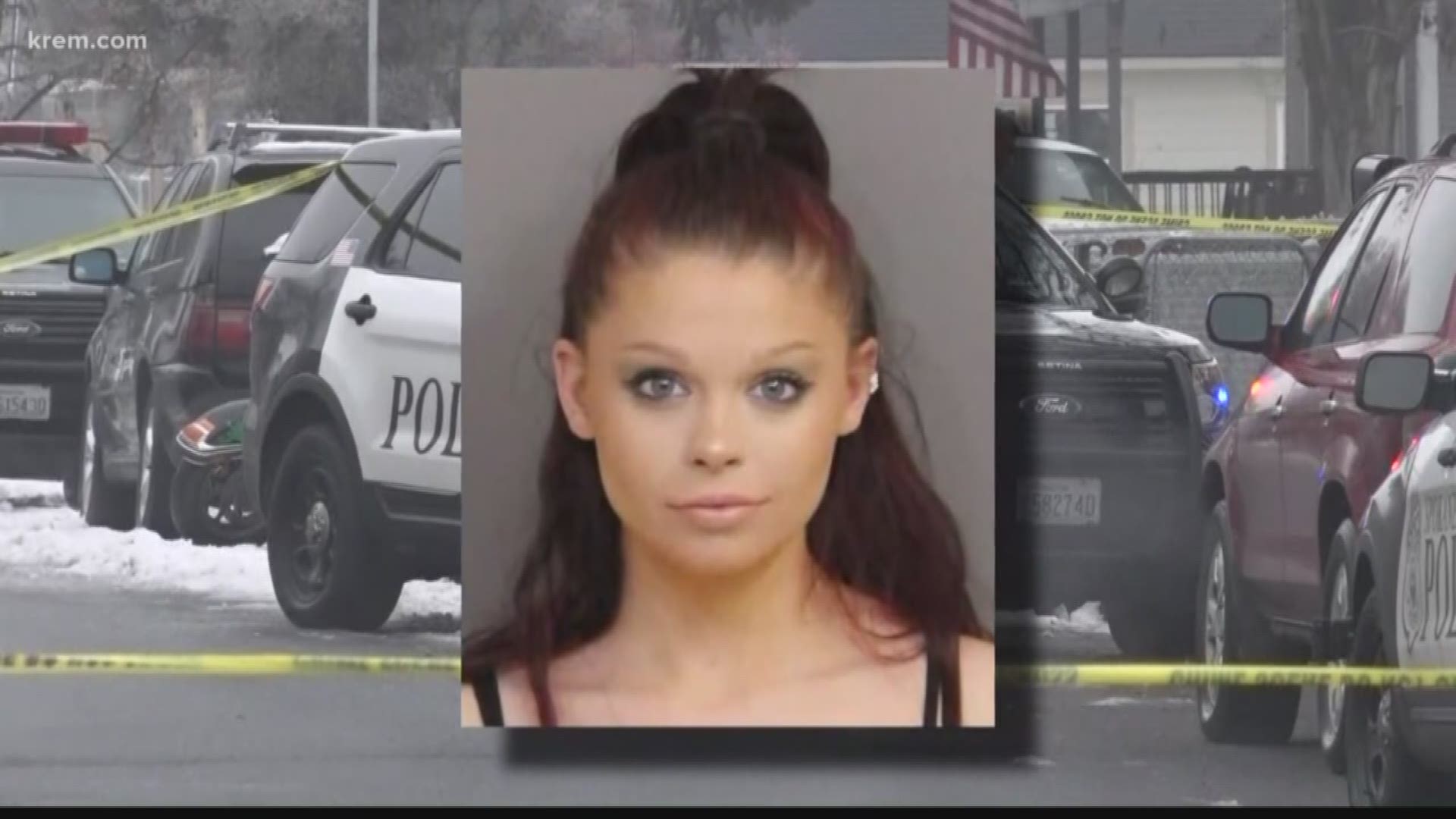 SPOKANE, Wash. — The suspect in the shooting death of a woman in Spokane on Thursday morning is now being investigated on a first-degree murder charge.

Ashley Horning, 25, had been booked on a second-degree murder charge after the shooting death of her ex-boyfriend's mother, who was the grandmother of Horning's young daughter.

A new search warrant shows that charge has been elevated to first-degree murder. The charge means detectives believe Horning planned to kill the victim. 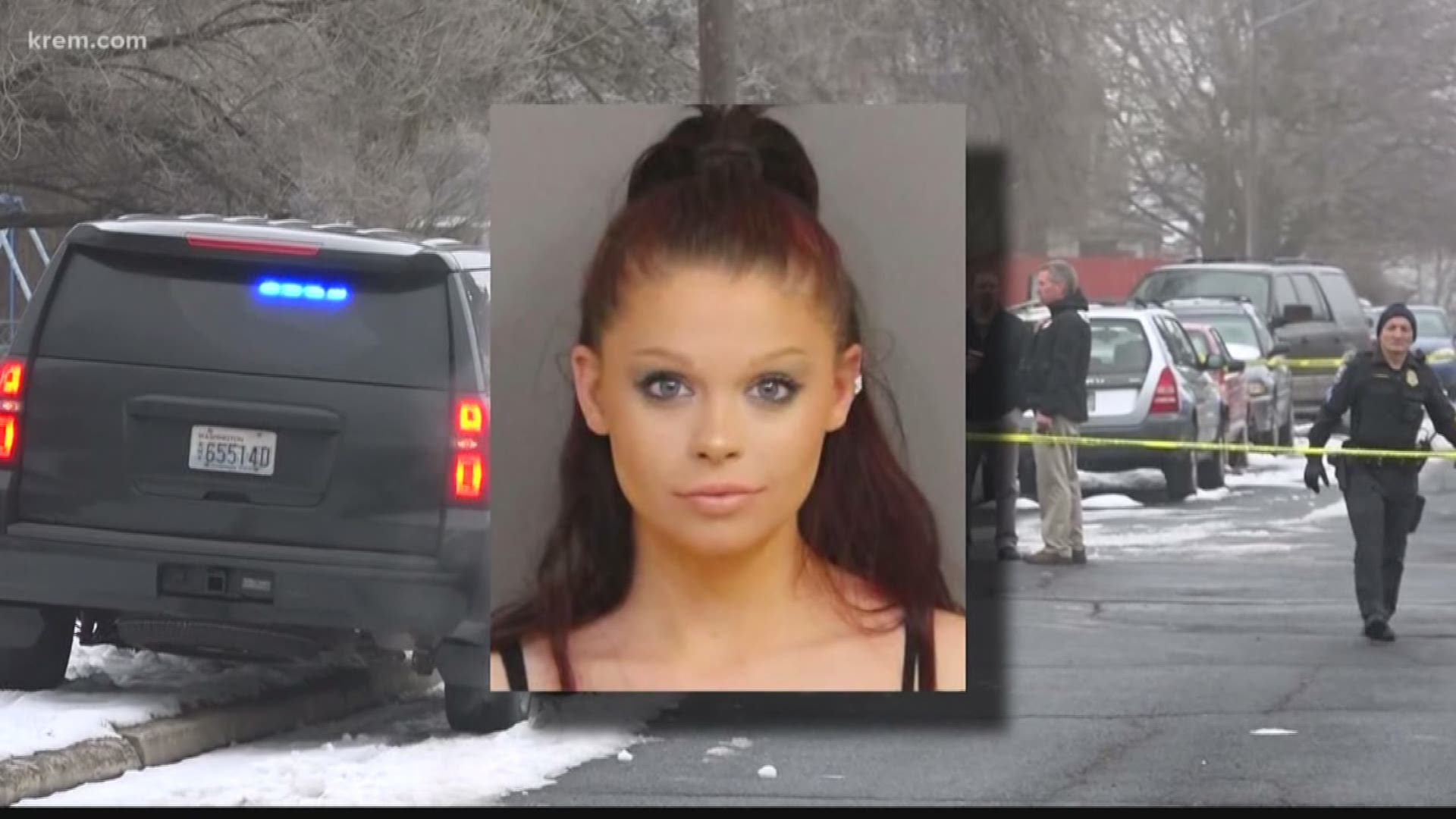 Powell was found dead at a home on East Cataldo Avenue at 9:34 a.m. on Jan. 24, according to an affidavit filed in Spokane County District Court.

Horning's daughter, who is also Powell's granddaughter, was at the scene during the shooting.

Powell's son and the girls' father, 26-year-old Gregory Powell, told officers he was at home in a back bedroom when he heard a knock on the door on Thursday morning. He saw his mother approach Horning, who said she wanted to talk with Gregory Powell.

Gregory said Horning asked him to call police then his mother collapsed on the floor. He told police Horning ran off and was wearing all-black clothing.

Two-hour search for Horning before arrest

Horning was at large for two hours before being captured by police at about 11:30 a.m.

A man called 911 at 11:20 a.m. and said he was with Horning at the Safeway on East Mission and was aware that Horning was wanted for murder. Spokane police responded and arrested Horning.

According to court documents, the man said he had been dating Horning for about two weeks. He said he received a Facebook message from Horning saying she was going to kill herself and disappear, documents said. She told him she was at the intersection of Stone and South Riverton.

The man told police he found Horning sitting on a bench overlooking the Spokane River. Court documents said he picked her up and took her to their home. While they were there, she showed him a social media post that showed she was wanted for homicide, documents said.

He said she mumbled something to him like, "She was a bad person anyways," documents said.

He told her he needed to turn her in to police. Documents said she asked him if he could just let her go but he told her he couldn't. He then took her to the Safeway and called 911.

Horning was arrested in the parking lot and booked into the Spokane County Jail.

Once Horning was booked, detectives conducted a recorded interview with Horning.

Documents said she was read her rights but she waived them.

According to court documents, Horning told detectives she was suicidal and she blacked out sometime that morning before leaving her house. She said her next memory was being picked up by her boyfriend.

Documents said Horning never denied shooting the victim but stated that it was possible that she did, however, had no memory of the crime.

She claimed Gregory Powell had been abusive toward her in the past and he had full custody of their daughter.

Then, when Horning's current boyfriend learned she was wanted for homicide, he told detectives he went to go look for his 357 Taurus Revolver and it was missing.

Documents said Horning was asked about the location of the firearm and she claimed she threw it in the river near the location where she was picked up by her boyfriend.

According to documents, Horning was taken to the location where she said he left the gun.

"At the scene she then said that if she committed murder she most likely would have thrown the firearm in the river and couldn't give an exact location," documents said.

Later, she said she recalled a bush and a pile of trash by the river where she got rid of the firearm, documents said.

Detectives said she was driven by a garbage can near E. Mission Ave. and South Riverton Ave. Documents said she suggested that police search the garbage can because it could be the possible location of the weapon.

According to documents, after an extensive search the weapon was not located.

She refused to give her name for the record because she said she goes by "Gypsy."

According to KREM 2 reporter Alexa Block, who was in the courtroom. Horning's lawyer said Horning doesn't recall the shooting and she has issues with sleep walking. He said she is suicidal and she wants to be put in a psych ward.

Horning's bond was set at $1 million and the no-contact order that was previously issued, barring Horning from going near Gregory Powell, is still in place.

Documents show Horning was involved in a lengthy parenting plan case with Powell. Records show the two share a daughter. The case was first filed in August 2016. Several proposed parenting plans and restraining orders have been filed since then by both Powell and Horning.

In one document, Powell wrote that Horning is no longer taking her medication and performing "dark witchcraft." In one restraining order request, Powell said Horning broke into his home in Cheney and has assaulted him many different times.

In Horning's restraining order requests against Powell, she said he's an angry, abusive man. She wrote that she was taken to the hospital when she was eight months pregnant due to being thrown around.

Father of Horning's other child shows up to the scene

As police searched for Horning, a man arrived at the scene. He told KREM 2 he is the father of Horning's 8-month-old daughter, who is not the daughter who was at the home during the shooting. He asked to remain anonymous.

"A co-worker contacted me and told me Ashley had killed someone. I didn't find it believable. I was at my lawyers office and so I came right to the scene," the man said.

He said Horning used to live in the home on Cataldo with her other daughter and now ex-boyfriend.

Foster sister: 'It's crazy to see it all'

KREM 2 spoke to Horning's former foster sister who lived with her for two years. She said Horning has been involved in custody battles that caused her severe emotional distress.

Horning's foster sister last spoke with her on the phone several months ago.

"She's one of the most soft-spoken people I've ever met, so it's crazy to see it all," she said.

RELATED: Victim of Idaho murder-suicide cried out for help before death at hands of ex-husband