As jury heads to deliberations in trial of killing of Ahmaud Arbery, anxious wait for verdict

Closing arguments concluded on Tuesday in one of the most politically and socially consequential trials in recent time in Georgia. 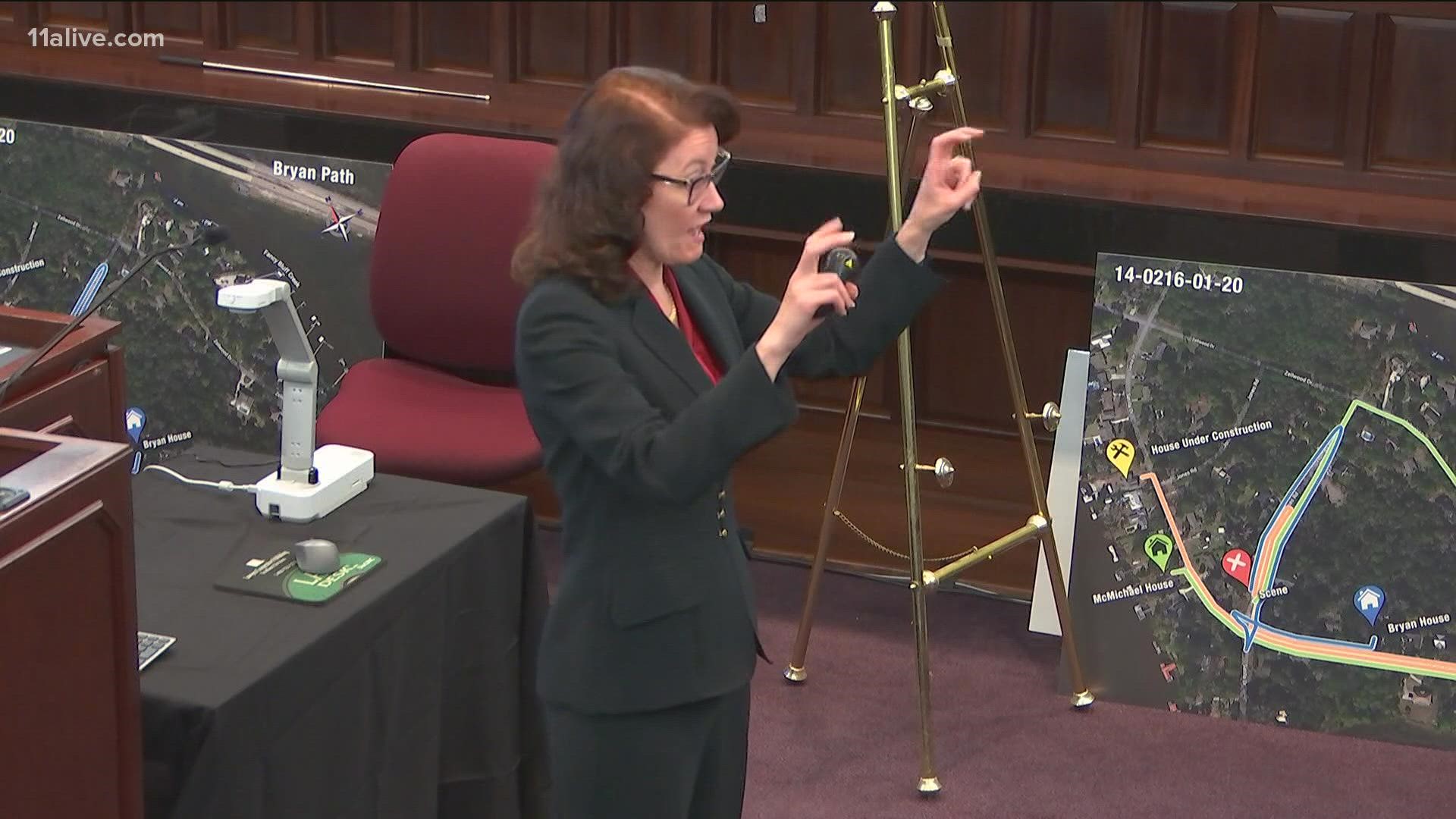 GLYNN COUNTY, Ga. — After a two-week trial and nearly two years since the killing of Ahmaud Arbery, a jury now heads to deliberations to determine whether his death amounted to murder.

Closing arguments wrapped up Tuesday with a final rebuttal from the prosecution and the judge's instruction to the jury.

After proceedings, Arbery's mother Wanda Cooper-Jones briefly spoke outside the courthouse in Brunswick and said she felt prosecutor Linda Dunikoski had done a "fantastic" job and expressed confidence that the jury would return a guilty verdict.

Demonstrations continued outside the courthouse Tuesday, as the city and state anxiously await the consequences of a verdict in one of the most politically and socially consequential trials in recent time in Georgia.

Father and son Gregory and Travis McMichael and a third man, William "Roddie" Bryan face murder charges in the Feb. 23, 2020 killing of Ahmaud Arbery, which would go on to be one of the galvanizing cases for racial justice protests that swept the country last year.

Authorities said Arbery was running through the Satilla Shores neighborhood in Glynn County, near Brunswick, on Feb. 23, 2020 when father and son Gregory McMichael and Travis McMichael left their home and began pursuing him. The McMichaels got ahead of him in their truck and blocked the road while Bryan followed and helped effectively pin him in the neighborhood.

Bryan filmed the incident from his following car.

The video taken by Bryan shows Travis McMichael and Arbery got into a struggle as he tried to run around the McMichaels' stopped vehicle blocking the road, and shot him.

Afterward the McMichaels claimed they were attempting a citizen’s arrest.

In the trial, prosecutors argued the men committed a vigilante killing that was not informed or influenced in the moment by Georgia's actual citizen's arrest law (which was repealed after Arbery's death).

RELATED: What are the three defendants in the trial of the killing of Ahmaud Arbery charged with?

They characterizing the events of Feb. 23, 2020 as an "attack on Ahmaud Arbery" - initiated by the McMichaels out of unjustified suspicions and assumptions about the 25-year-old Black man.

Defense attorneys argued it was an honest, sincere and lawful attempt to detain Arbery as a "suspect" in neighborhood thefts and break-ins.

They claimed the pursuit of Arbery that ended in his death was a tactical, restrained process of "watching and waiting" to stop him under reasonable grounds for believing a crime had been committed - which turned into a tragic case of self-defense when Travis shot and killed Arbery.

During the roughly two-week trial, there has been a focus on Bryan's video from that day and others from an unfinished home in the Satilla Shores neighborhood.

Arbery was allegedly spotted entering onto that property a number of times in the months leading up to his death, which the defense has seized on as a critical component of their citizen's arrest case.

There is no evidence Arbery ever took anything or committed any damage at the home, and the owner had maintained before the trial he did not suspect Arbery of taking anything. And prosecutors have challenged the idea the McMichaels were in any way consciously attempting a citizen's arrest in the legal sense - often pointing out that they did not use the term "citizen's arrest" when explaining their actions immediately after the killing, or tell Arbery he was "under arrest" in any sense during the pursuit that ended in his death.

At one point prosecutor Dunikoski asked an officer who had patrolled the neighborhood and been involved in investigating the neighborhood crime incidents if it was his "intent to deputize Greg McMichael or Travis McMichael?"

Other moments that have stood out during the trial included Travis McMichael, the man accused of pulling the trigger in the fatal shooting, taking the stand and testifying.

"I shot him (Arbery)," Travis McMichael said tearing up. "He had my gun."

The defense asked several times for a mistrial, with Bryan attorney Kevin Gough in particular repeatedly trying to make the case that the political environment made a fair trial impossible.

Prosecutors argued Gough's volatile comments early in the trial, about not wanting "any more Black pastors coming in here" were largely the cause of the demonstrations he objected to.

A jury of 11 white people and 1 Black person - the product of a jury selection process that was itself drawn out and highly contentious - will ultimately decide if Ahmaud Arbery's death was a murder.