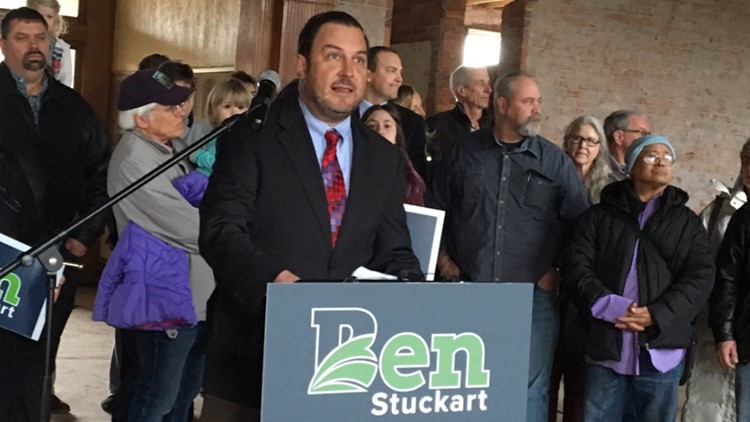 Ben Stuckart announces his run for mayor of Spokane.

Border Patrol agents sometimes walk onto buses without a warrant and ask riders for their citizenship and immigration status. Federal code allows them to do bus checks as long as they are within 100 miles of a U.S. border. Spokane is just within that limit at 90 miles from the Canadian border. Border patrol officials said they do not target riders for any specific reason.

In the letter, Stuckart expressed his concern about Greyhound’s decision to allow Customs and Border Protection officials onto their buses at Spokane’s Intermodal Center. He says these efforts may violate Title 18 assurances of “equal participation…in public accommodations.”

An excerpt of the letter reads:

Stuckart cites several examples, including one where CBP agents reportedly confronted a Latino family on a Greyhound bus at the Intermodal Center and asked, “Are you illegal?” and, “Do you have documents on you?”

In March, a Spokane resident traveling to Seattle on a Greyhound bus was reportedly questioned at the Intermodal Station, according to Stuckart’s letter. She said agents “only spent time questioning individuals that had darker skin or had an accent.”

Greyhound’s decision to allow CBP agents to access their passengers in Spokane can maintain “a fearful and hostile environment…for people of color in Spokane,” Stuckart wrote.

Stuckart also wrote that the American Civil Liberties Union has recently contended that Greyhound has a Fourth Amendment right to refuse consent to board its buses, though the company has publicly stated it is “required” to allow the agents onto its buses.

He concluded with this statement:

Greyhound has been a long-term tenant of Spokane’s Intermodal Center and I look forward to continuing that relationship. Spokane’s anti-discrimination ordinances mean little if the City of Spokane cannot ensure compliance with them on its own property, such as the Intermodal Center. I would like to set up a meeting to discuss this issue with you further and to understand whether you would consider alternative actions Greyhound can take to ensure that all people, regardless of their race or national origin, feel welcome in your buses and stations.

You can find a link to the full letter on the City of Spokane's website.

"In terms of our policy, while we are required to comply with the law by allowing Border Patrol agents to board our buses when they ask to do so, we do not support or coordinate these searches, nor are we happy about them. We understand that this practice negatively impacts our customers, and we have started conversations with the Border Patrol to determine if there is anything that can be done to balance the enforcement of federal law with the dignity and privacy of our valued customers.

Greyhound is a private company caught in the middle of an issue that is not in our control. Our drivers face arrest and fines for obstructing these agents, and we would not want to put their safety, or the safety of our passengers at risk by attempting to physically stop a federal agent from boarding."

A U.S Customs and Border Protection spokesperson issued a statement as well that said:

Although most Border Patrol work is conducted in the immediate border area, agents have broad law enforcement authorities, including the authority to question individuals, make arrests, and take and consider evidence. The Immigration and Nationality Act 287(a)(3) and 8 USC 1357 state that Immigration Officers, without a warrant, may "within a reasonable distance from any external boundary of the United States...board and search for aliens in any vessel within the territorial waters of the United States and any railcar, aircraft, conveyance, or vehicle”. 8 CFR 287 (a)(1) defines reasonable distance as 100 air miles from the border.”