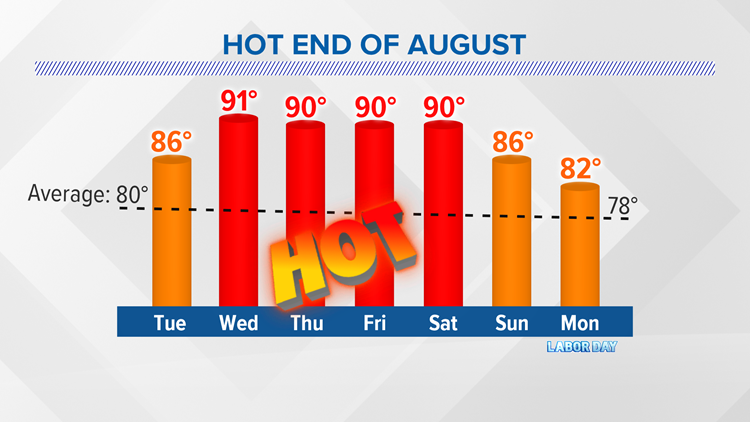 Photo by: KREM 2 Weather
Spokane forecast high temperatures for the final four days of August are in the 90s.

SPOKANE, Wash. — Meteorological Autumn starts on Sunday, September 1st. As for the days leading up to that, the cliche that comes to minds is the "dog days of summer."

Starting Wednesday and lasting through at least Saturday, high temperatures in Spokane are forecasted to be in the low-90s. Wenatchee and Omak are expecting mid-90s for those days, and Lewiston may top 100° on Wednesday!

Will this be record-breaking? Not quite. For Spokane the record highs at the end of August are between 98-100°. Lewiston's record highs are 103-106°.

However, August has been a surprising warm month. While most of those that have lived here over the past five years have said this summer has been cooler (than recent years), August has had by far the most 90-degree days for Spokane in 2019. We've had six days of 90° or warmer, with a 98° on August 7th marking the hottest day of the summer. And should we hit 90 or higher between Wednesday to Saturday, that would total 10 days at 90 plus.

August 2019 is currently on pace for the 14th warmest August in Spokane. But with highs in the 90s and lows in the 60s, that will possibly end up in the top-ten list of hottest Augusts.