'Once you hear about it, it's already too late:' Here's what's happening with GameStop stock

We asked a UArizona stock market expert about the risks in investing in the internet's latest darling stock. 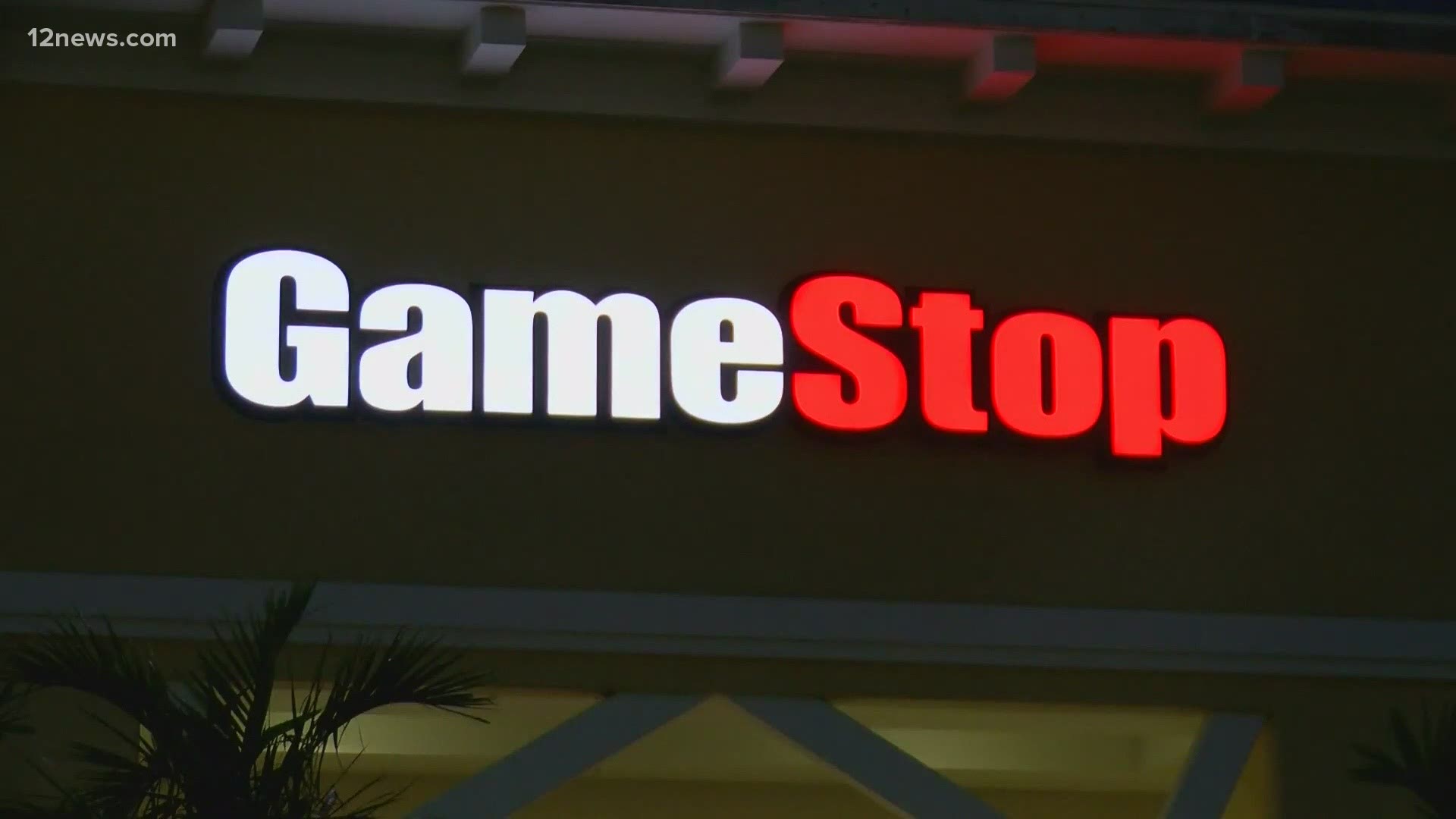 PHOENIX — Twitter and Reddit have been dominated by news of GameStop's meteoric stock rise. It's not just about the rise in the struggling game store's value. It's become a full-on drama featuring a giant hedge funds and tens of thousands of individual investors, who, depending on who you talk to, are looking for a quick score or to stick it to the system.

But the prominence -- it's been in major newspapers and on cable and network news -- can be a problem.

“The last thing we want, as someone who is a student of stock markets, someone who's been sitting in the market for 40 years as I have, is the markets to be front page news, right? Because they don't work well that way,” Christopher Lamoureux, financial market expert and University of Arizona Diamond Professor of Finance, explained.

So here's what's happening, beyond the hype:

GameStop has been an ailing company over the past year, as fewer people have been walking into its stores, choosing instead to download games. When the pandemic hit, it closed 300 locations. On April 1, its stock price was $3.25. To end 2020, its price was under $20. On Wednesday, the name was trading as high as $380.

And who’s getting the credit for surging the price so heavily? A subreddit thread called r/wallstreetbets.

"Shorting" a stock is often a way to make a quick profit. But it has a lot of risks.

“If the stock price should start to go up, then you're going to find yourself having to pay higher and higher fees to continue to borrow the shares,” Lamoureux said. “The person you've loaned the shares to may want them back, forcing you to close the position. And it may be very difficult psychologically, to continue to experience losses because one thing about being short, your potential losses are unbounded. You could lose everything.”

GameStop's price soared over the last few days. So a lot of hedge funds and other institutional investors closed out their short positions to minimize the damage they were taking.

But why did a basically moribund stock take on so much value?

It was a strike against those large investors. And a handy way to make a quick profit if you sold higher than you bought.

Many of these large funds and institutional investors have already had to abandon their short positions, taking massive losses.

Because of an internet site.

“And the question that we, as students of the market, confront here is whether it's a signal to us that there's something broken or something fundamentally wrong in the market, or whether these are the kinds of occurrences that we just have to learn to live with,” Lamoureux said. “So that's sort of where we are right now.”

A warning to amateur investors

As for amateur investors or those who are thinking about putting some money into a brokerage app to try to get in on this action with GameStop, Lamoureux's advice is: "Don't."

"The fact is, once you hear about it, it's already too late," Lamoureux said. "The advice always is to take a very prudent and risk map in a managed approach, perhaps buying a index mutual fund that has very low management fees, and tracks the overall market and buy and hold, don't be driven in your investing activities by the news of the day or the gyrations in the market. The best way to lose money is to try to time the market or, you know, worry about selling when the prices fall, and so on."

GameStop stock closed at nearly $350 on Wednesday and at 10 a.m. Thursday was up to $469.42. That plummeted an hour later as some brokerage sites, including Robinhood, which is supposed to be for average everyday people looking to play the stock market, began restricting stocks that made prominent noise on r/wallstreetbets. The price of the stock is hovering around $260 as of writing after going down to almost $100 earlier Thursday morning.

Speculation is rising that the decision by Robinhood and other sites restricting purchasing of the stock may have come at the hands of investment companies involved with the trading app that may benefit from the stock plummeting, adding more fuel to the class warfare type of fire that this whole situation revolves around in the first place.

On Thursday, the decision to halt trading on the stock even has political opponents like Democrat U.S. Rep. Alexandria Ocasio-Cortez and Republican U.S. Sen. Ted Cruz uniting.

As users on r/wallstreetbets try to convince each other to hold their positions in hopes the price pumps back up, many are also selling their positions, seeing the price fluctuate and go down dramatically as these brokerage applications have restricted purchasing the stock.

It’s likely not going to end well for GameStop stock. We just don’t know exactly how or when yet.

Did the current environment create this and what happens next?

"One issue here is, it's not clear how the amount of short selling got so large relative to the total shares outstanding," Lamoureux said. "And so that's potentially something that regulators could take a look at."

As to why something like this is even happening, Lamoureux said it could be the "easy money environment" that we're in right now. Interest rates are historically low, experts don't believe the pandemic will have long term effects that harm the economy.

"So the question is, what are what are we to do with funds, with money? And if you're not going to earn interest rates, then you look for risk, you look to take on risk, and that can often give rise to excessive risk taking, and frothiness in financial markets," Lamoureux said.

Is the low interest rate environment and the fact that the U.S. government is buying so much of the Treasury securities that are out there, is that creating a sort of rife environment for this bubble activity? Those are questions that we don't have the answer to right now, Lamoureux says.

"One potential direction that we might see regulators discussing is thinking about the good old days when there were specialists in the stock market and one of their roles was to provide stability," he said. "But even in that environment, as I've suggested, it's impossible to hold back a tide of onrushing Reddit buyers, as we see in this case."

The other issue that could be presented as well is that regulators feel they have to address something, which could have unintended consequences.

"Sometimes we see something like this, and regulators feel that it's something that they have to address," Lamoureux said. "They put into place certain regulations, but then have unintended adverse consequences. You can't overreact, either as an investor or as a regulator, to this type of event.

In today's age of constant misinformation, regulators will also investigate whether misinformation is involved in this price surge of GameStop stock.

"Is there an attempt to profit from manipulating the information flow?" Lamoureux said. "And at this stage, in this case, we don't have any idea as to what's going on. But we certainly are intrigued by, again, another example where there's such a big divergence between the underlying fundamental valuation and market prices."