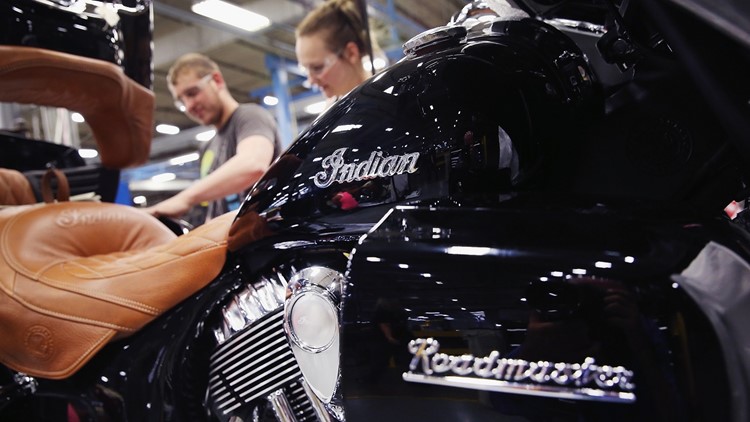 Photo by: Scott Olson
Workers put finishing touches on an Indian Roadmaster motorcycle at the end of the assembly line at the Polaris Industries factory on August 8, 2014 in Spirit Lake, Iowa. (Photo by Scott Olson/Getty Images)

MEDINA, Minn. — Polaris CEO Scott Wine would probably be the first to tell you the motorsports industry is a highly competitive, rough-and-tumble affair where profits depend on disposable income, and keeping a handle on costs.

So it comes as no surprise that Wine is among those recoiling at a White House plan to increase tariffs on Chinese goods up to 25 percent.

“At 25% it’s downright catastrophic in terms of impact on the company and employees,” Wine said during a phone call with CNBC’s Morgan Brennan Tuesday.

Polaris is factoring in roughly $90 million in additional tariff costs this year, thanks to the current 10% levy on some Chinese imports, as well as retaliatory tariffs on motorcycles imported from the U.S. into Europe in response to steel and aluminum tariffs. If new tariffs are introduced Friday, as expected, the company would take a hit of between $195 million and $200 million, Wine told CNBC.

The CEO also said the increased tariffs could erase a third of the company’s net income. The company has an employee stock ownership plan, and in this case employees own 5% of the company. Wine underscored the effect it could have on Polaris’s stock, and therefore employees.

“When we are hit with tariffs, that’s what I mean by impact to employees,” he said. “Through no fault of our own, one-third of our net income could go away.”

Wine says he doesn't want to move jobs out of the country, but may be forced to if the tariff increase takes a big enough bite out of his bottom line. Polaris currently operates a manufacturing facility in Monterry, Mexico.

“I do not want to do it, but if I can’t get relief, I’ll be forced to think about moving some of those jobs to Mexico,” Wine said in an interview with IndustryWeek.  “It is not my desire to ever move a job out of the U.S. We have great employees here, we make great vehicles here, and that is what we’re trying to do.”

Shares of Polaris stock slumped 8.2 percent through the close of the markets late Tuesday.