'We don't see Anna as having a disability': Retro Donuts employee shines at work

Anna Miller has worked as a “donut engineer” at Retro Donuts for almost two years. Her boss describes her as a hard worker with a great spirit and contagious laugh. 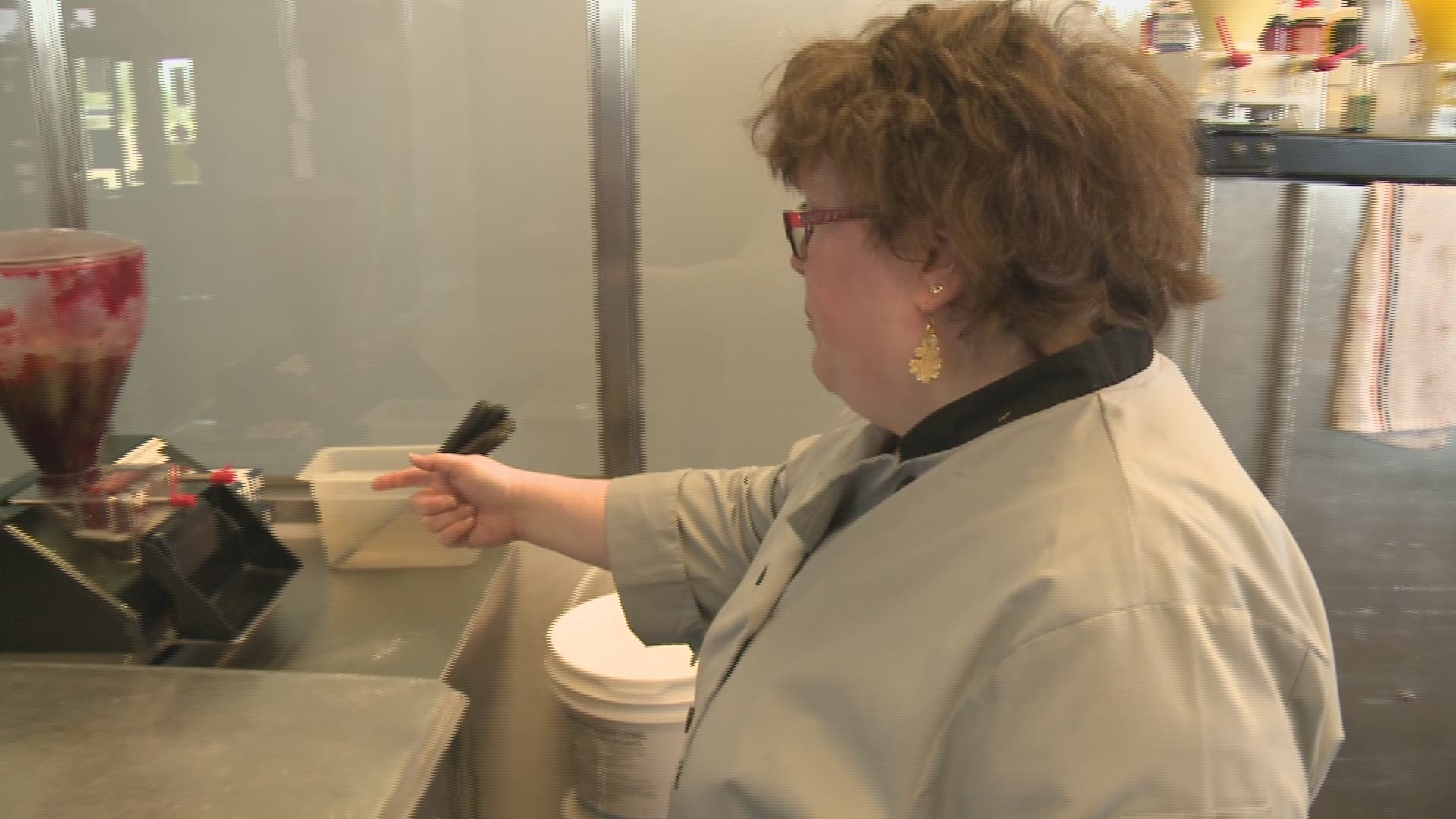 SPOKANE, Wash. —  Anna Miller has worked as a “donut engineer” at Retro Donuts in north Spokane for almost two years. Her boss describes her as a hard worker with a great spirit and contagious laugh.

Retro Donuts owner and founder Jon Fine is a supporter of disability inclusion. He hired Miller through the Spokane Employment Services team of Washington nonprofit Northwest Center (NWC), which provides service for people with disabilities.

Though Miller has a disability, Fine said he sees her as he would any other member of the Retro Donuts team.

“We don’t see Anna as having a disability whatsoever. Every person is going to learn their job at a different pace,” Fine said.

Miller was instrumental in making 600 glazed and cinnamon sugar donut holes for gala attendees. She said she had never been to an event like it before.

“It was awesome,” she said of her trip to Seattle. “It was so cool to see that people were so excited to do a thing for people with disabilities. That makes me feel very happy because it’s just something that I really care about.”

The recognition for Miller at the gala was a great example of the many ways people with disabilities can contribute to an organization or business, Fine said.

“They took the time to really recognize what Anna has done as a person – not just as a client of NW Center. They really rolled out the red carpet for her,” he said. “The ovation when they talked about Anna was very heartwarming and I think she’ll remember that for a long, long time.”

Miller describes her job of making donuts on Mondays and Fridays as “calming,” and said she has grown close to Fine and her coworkers.

Her favorite donut: the blueberry fritter.

Fine said he and the staff began exposing Anna to more of the business side of Retro Donuts about six months ago.

“Her responsibilities have expanded and she handles it really well,” Fine added. “She kind of remember everything she has to do and that’s really been wonderful to see.”

Fine has the same expectations of Miller that he would of anyone on his team.

“We don’t necessarily train a person. We train their spirit. You know, we want her, just like everybody else, to have a sense of accomplishment. We have high expectations for her,” he said. “She takes constructive feedback very well and she improves, and that’s what we want for her and everybody else. It’s really great to see her gain independence working here at Retro Donuts.”

Fine says he has seen Miller grow over the past two years. She has begun opening up to customers and letting her vibrant personality shine forth around her coworkers.

“When Anna walks into a room, she kind of checks everything out and can kind of come across as being pretty quiet and shy. But I don’t think anyone here loves anything more than hearing her laugh,” Fine said. She has a great sense of humor about her – and we’ve really seen it develop.”

Retro Donuts has been a key player in disability inclusion since the shop opened in 2016, when Miller’s job coach told Fine about the NWC mission.

“I don’t believe in unpaid internships. I think everyone should earn their wage and be proud of that paycheck they earn each week,” Fine said. "Anna makes tips, as well as the rest of the team. She’s a part of the experience at Retro Donuts.”

Miller moved into her current position when another NW Center client moved on from Retro Donuts to a new opportunity.

“We just knew right away that she had the right spirit and willingness to learn, and some job experience already. Again, she’s just blossomed into something that makes us real proud,” Fine added.

When asked about what advice he would give to someone interested in partnership with NW Center, Fine said, “Don’t hesitate.”

“There’s nothing better than having an individual feel like they really make a difference and I think as an employer, as a business owner, it’s probably one of the greatest things that I do is writing out paychecks every week to all of my employees contributing to the economy,” Fine said.

"And taking someone like Anna, or anyone else who’s out there that would like to make a difference at a company, to give them that opportunity, train them as if they have no disability, treat them respectfully, you will have great results. No question at all," he added.

RELATED: He uses a wheelchair. She doesn’t. Together, this couple proves all people deserve love

RELATED: Actors with special needs come out of the shadows and into the spotlight