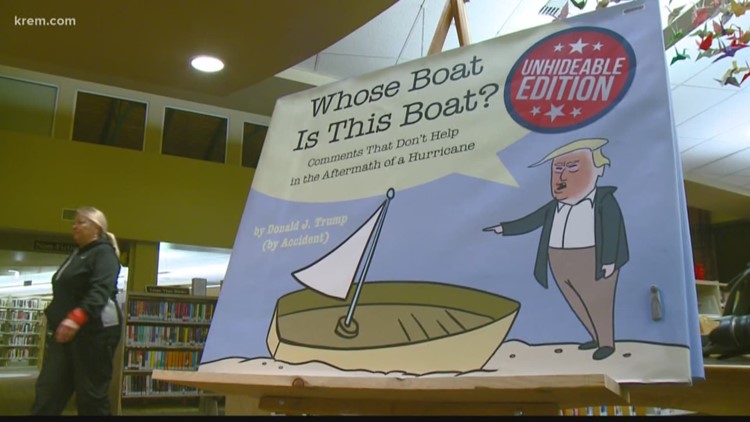 SPOKANE, Wash. — This year brought stories that tugged at our heartstrings, made us laugh or cry, and filled our hearts with pride at living in the Inland Northwest.

A book-hiding patron at the Coeur d’Alene Library made national news, Jimmy Kimmel insisted that Gonzaga University was a figment of our imaginations and the man behind a unique vehicle cruising the streets of Spokane told his story.

These are the top feature stories of 2019 as voted by an informal poll of KREM 2 staff.

A book-hiding patron at the Coeur d'Alene Library made national news this year after KREM first reported the story.

Library staff said the patron has been tormenting staff by maliciously misplacing and hiding books in different parts of the library.

The hidden books are mostly non-fiction works that are critical of President Trump, according to library director Bette Ammon. Other titles included books about feminism and LGBTQ topics.

"I noticed a large volume of books attacking our president. I am going to continue hiding these books in the most obscure places I can find to keep this propaganda out of the hands of young minds. Your liberal angst gives me great pleasure," an anonymous note on the library's public comment board reads.

One of the hidden books was "Whose Boat is this Boat?," a satirical children's book compiled by staff from "The Late Show with Stephen Colbert." The book is made of quotations from the president in the wake of Hurricane Florence and "demonstrates what not to say after a natural disaster," according to its description.

Colbert responded to the book-hider by sending a signed, "unhideable" copy of the book to the library, which arrived in late November.

Staff told KREM that the book is displayed near the front of the library for all patrons to enjoy.

Jimmy Kimmel started a not-so-serious feud during March Madness when he joked that Gonzaga University did not exist.

This sparked a series of tweets and petitions from Gonzaga President Thayne McCulloh, basketball players and current students.

After the Bulldogs lost to Texas Teach in the Elite Eight, Kimmel tweeted his congratulations to the team, writing, "Congratulations to my new friends at #Gonzaga on a great season ... Imaginary or otherwise, I have grown very fond of you."

RELATED: 'I have grown very fond of you': Kimmel tweets his congratulations to Gonzaga

3. The man behind Spokane’s boat car

You may have seen it driving around Spokane on city roads or Interstate 90.

We introduced you to Tim Lorentz, the man who created Spokane's famed boat car more than 10 years ago.

Lorentz said the idea stemmed from his long love of muscle and exotic cars.

When asked why he decided to build it, his answer was simple and quite possibly unexpected: “I don’t even know why. I thought it would just be really cool.”

Lorentz recently told us that he and his unique ride, which he named LaBoata, will appear on a TV show in late December.

RELATED: Owner of Spokane's boat car is appearing on TV show in December

RELATED: Meet the man behind Spokane's famed boat car 10 years after its creation

Yo ho, yo ho, it's a pirate's life for Captain Dan Mimmack – and his first mate, a 15-year-old dog named Hunter.

Mimmack, 63, sails the high seas of Lake Pend Oreille in Sandpoint. Instead of pillaging and plundering, he brings joy and smiles to underprivileged children in the area.

“They [kids] have access to playing with this boat any time at no charge – and that’s what makes my heart sing,” he said.

After seeing a Craigslist ad for a pirate ship out of Olympia, Washington, nine years ago, he bought the boat blindly for $1,400. The rest is history.

In June, the Spokane mother of three made history by becoming the first mother hit a buzzer on the popular TV show.

Though Zimmerman missed the show's final in Las Vegas by one point, she isn't letting her dreams stop there. She plans to compete again and make it to the finals next time.

"I've still got some really big dreams and I'm hoping to use this platform to really make a difference in other people's lives," she said.

Wellpinit, Washington, is a quiet place, unless you're at a Wellpinit High School football game. Then, you'll clearly hear Isaac Tonasket.

He's the team's offensive and defensive lineman who is also the kicker and the leader of the war whoop battle cry on kickoffs.

Tonasket has no problem showing off his vocal range. He sings traditional Native American songs, something his dad encouraged from a young age.

"Everyone tells me how proud he would be, just seeing how far I've come," Isaac said. "So I think he'd be really proud."

RELATED: 'You can hear him from a ways away': Wellpinit football player honors late father with battle cry, songs

In September, someone used a fake $50 bill in exchange for 9-year-old Alexis Murphy's older Xbox model.

After a story on the scammer ran on KREM, many people in the community reached out to ask how they could help the family.

With the help of people who saw the story, the community raised enough money to buy her the Xbox she was saving for all along.

Xbox also caught wind of the story and invited the entire family to their Seattle office, so Alexis could meet with women who are engineers behind her favorite games.

8. 'The old fart with the yellow cart'

Kettle corn popper Rusty Dormaier has been playing tunes and popping kernels with his cart for ten years.

The 72-year-old said his popping passion project started when he forgot to put a lime in his Corona.

"One too many beers and I bought the kettle, sight unseen," Dormaier said.

But it did work. Now Dormaier pops kettle corn a few times a month, traveling to towns around the Inland Northwest with his Cedarhaven Kettle Corn stand.

He said he is known to many as "the old fart with the yellow cart."

RELATED: This 72-year-old Spokane man started popping kettle corn as a joke. Now it's his passion

An 8-year-old girl from Sandpoint accomplished a feat that would be impressive for even the most experienced angler.

Sophie Egizi set a new catch-and-release record for Gerrard rainbow trout in Idaho. She caught the 36.5-inch monster while fishing on Lake Pend Oreille in October.

"She's tough as nails. I was so proud of her. She did a great job," said Sophie's dad, Bob Egizi.

SNAP staff found a fur-ever home in November for a dog who belonged to a late homeless client.

Rocky's owner Ray had been a SNAP client since 2010, and the two had lived on the streets since 2015. Ray didn’t have a family and he saw the SNAP Homeless Services team as his family.

After Ray's passing on Nov. 6, KREM wrote a story about a home for Rocky. More than 200 people reached out to SNAP wanting to adopt them before they finally situated him with the Hoffer family in Spokane Valley.

Do you have any uplifting or interesting stories about your community that you would like for us to cover in 2020? Send an email to newstips@krem.com or reach out to us on social media!