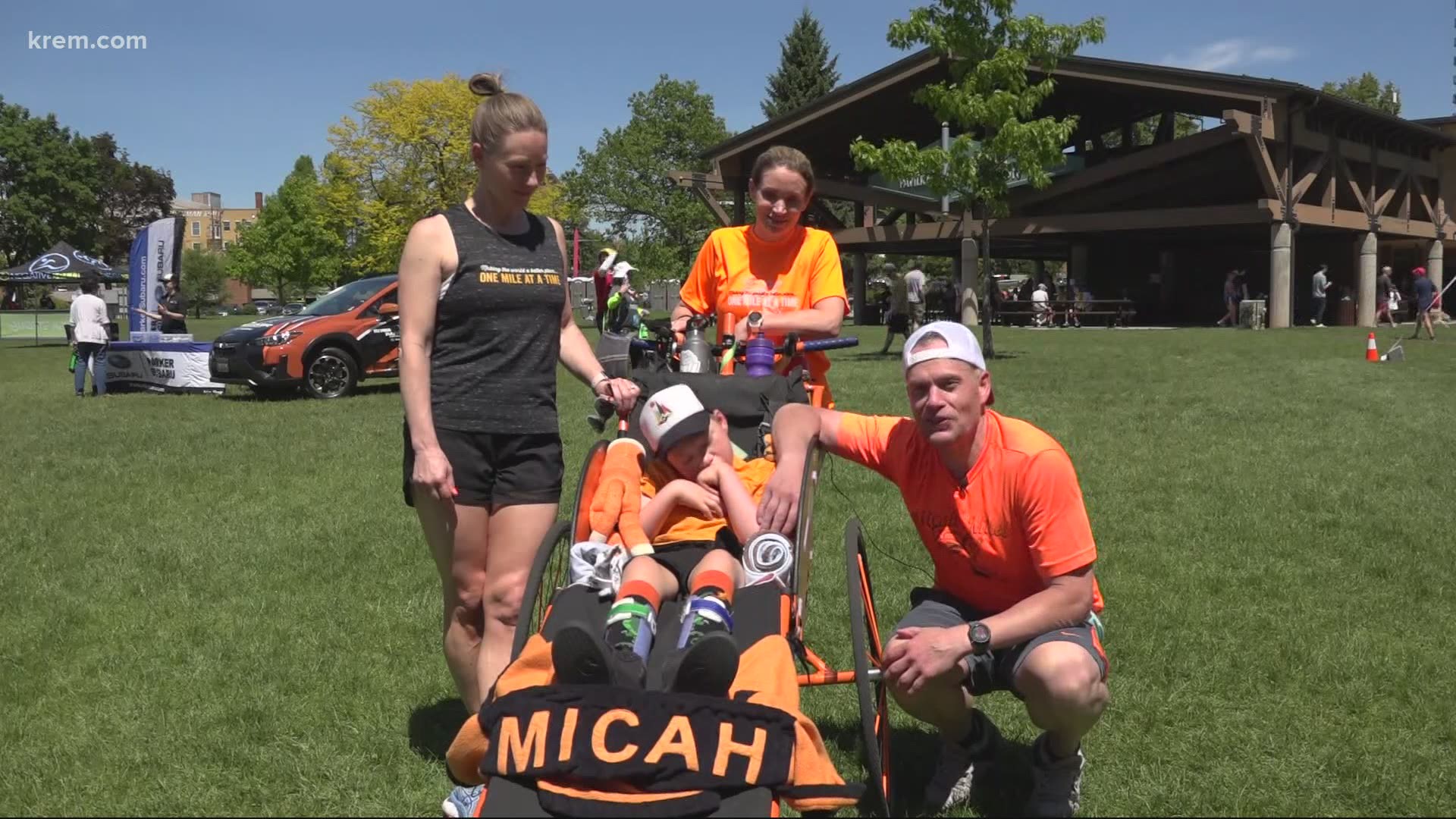 COEUR D'ALENE, Idaho — Runners from across the Pacific Northwest and the country flocked to McEuen Park for the 2021 Coeur d'Alene Marathon on Sunday.

Hundreds of people laced up their shoes for one of the four races, with the tradition marathon, half-marathon, 10 kilometer and 5 kilometer distances being offered as usual. The race started and ended in McEuen Park as usually, with runners being cheered on by their loved ones as they crossed the line.

While completing the race may be the main aim for most of those taking part in either the tradition or virtual marathon, for one group, the race was about more than putting a time on the board.

"Micah is an 11 year old who's just this amazing little guy ... and he loves to roll in marathons," said Jeff Snell, Micah's father. "He's been rolling in marathons since he was 2 years old, and this is his 36th marathon today."

Micah was born seven-and-a-half weeks premature, and five years ago, his family started a non-profit called Micah's Miles to help promote inclusivity in communities. Started after Micah's sister wrote a children's book about her brother, the non-profit also donates to organization's such as the Make-A-Wish Foundation and United Cerebral Palsy, according to Snell.

Four years before they started the non-profit, the Snell family said they started running marathons, much to Micah's enjoyment. This year marked the family's ninth Coeur d'Alene Marathon, although Snell said they competed virtually last year from their hometown of Camas, Washington due to the pandemic.

They were more than happy to be back in the Lake City for the 2021 edition of the marathon.

"Oh, love it, yeah. It was a beautiful day and so many nice people out here. Its just a great, great time to marathon. A great time to roll, right Micah," Snell said, before sharing a laugh with Micah.

The Snells also like the Coeur d'Alene Marathon because it includes Hoyt Chairs, which is the piece of equipment Micah uses to complete marathons. With the inclusion of other Hoyt Chair racers, Micah isn't alone in how he finishes his 26.2 miles.

According to his family, Micah's presence on the course brings joys to his fellow racers.

"It's so nice to see how happy he makes people," said Jodi Ailor, Micah's aunt. "You can be out there at mile 23, and people just don't feel good. They see him rolling and they just get a big smile. It's special."

Snell said that Micah's Miles has raised about $75,000 in charity so far. More information on the non-profit can be found at their website.