The five old flags are adorned with Japanese handwriting, likely messages from family members to their sons who left for combat. 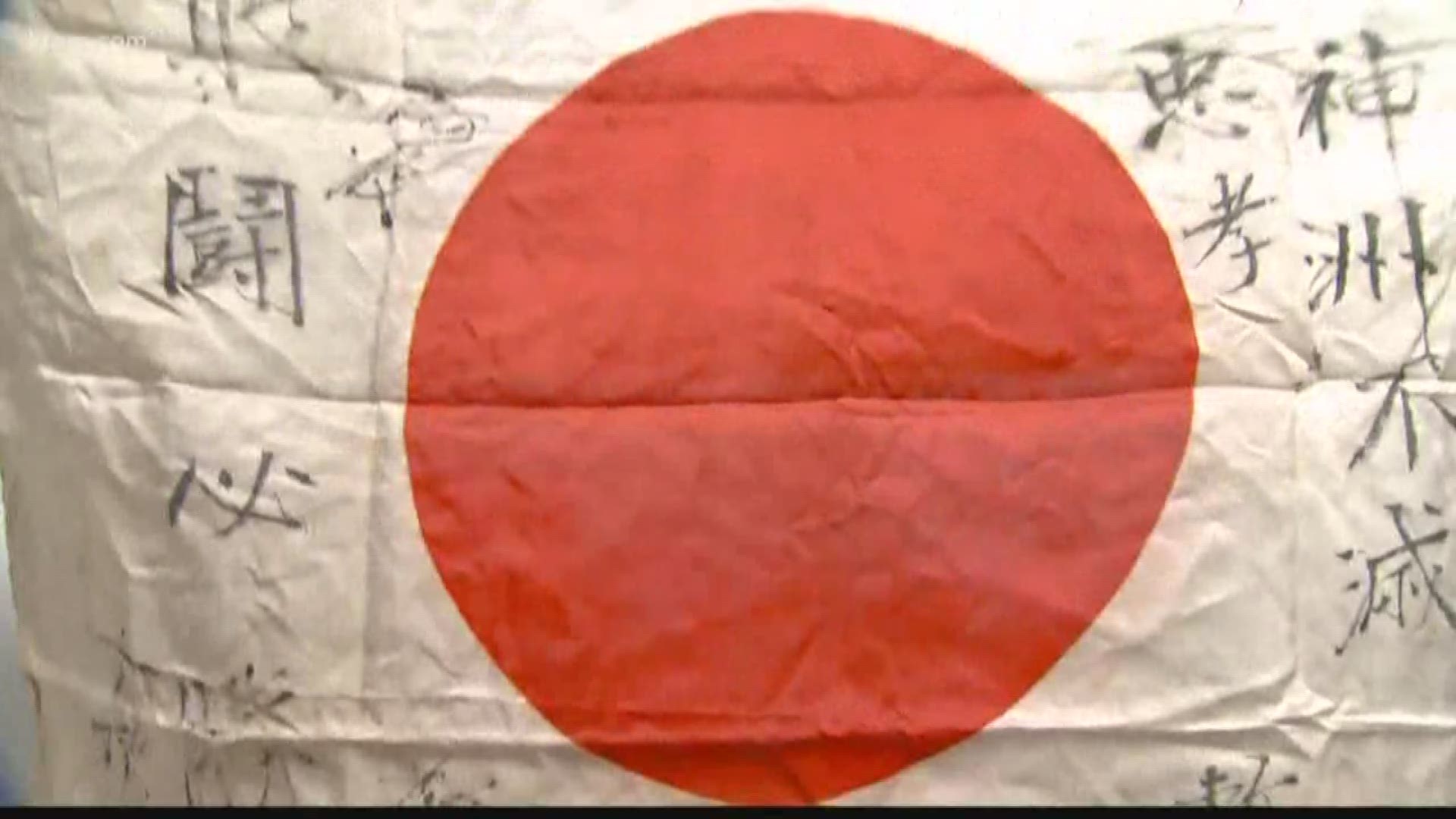 ST MARIES, Idaho — A group of North Idaho veterans hope to wrap up a World War II story that has been roughly 75 years in the making.

The American Legion post in St. Maries was recently gifted five Japanese flags believed to have been taken from fallen Japanese soldiers during the war. The veterans group now hopes to help in the return of the flags to Japan and the families of the fallen soldiers.

"We're the last step of that journey back to Japan," said Jim Shubert, commander of American Legion Post No. 25, on Tuesday. "It would just be great to get them home to those people."

The five old flags are adorned with Japanese handwriting, likely messages from family members to their sons who left for combat. At least one of the flags appeared to have dried blood on it.

The flags were inherited by Benewah County resident Carol Koelbel and gifted to the American Legion.

Koelbel told KREM that her father in law, John Anthon Koelbel, picked up the flags while serving in the Army in New Guinea during World War II. They were eventually handed down to his son, also named John, and then later inherited by Carol after her husband's passing.

After keeping the flags in storage for a few years, Carol decided to give the wartime souvenirs to the American Legion post in St. Maries.

"I thought that would be a good home for them," Carol said of her thoughts at the time, unaware of what was going to be in store for the flags.

A lightbulb would eventually go off in Shubert's head while mulling over what to do with the historical flags.

"I took them out one day, and looked at them and thought, 'You know, these flags really don't belong to us. They belong to the Japanese descendants,'" he said.

With that, Shubert enlisted the help of a Japanese-American friend and began looking into how the flags could be returned to Japan.

Over the course of their research, the group discovered the Obon Society, an Oregon non-profit that specializes in returning Japanese war items to their respective families.

"OBON SOCIETY is a non-profit humanitarian effort dedicated to the pursuit of peace. We provide the opportunity for reconciliation between families through the return of personal items taken during war," says a statement on the group's website.

According to the Obon Society, Japanese men drafted into the military would often be given small Japanese flags signed by family members as a sign of support. The flags, named Yosegaki Hinomaru, or "good luck flags," would be folded and carried securely beneath a soldier's clothing during war.

Shubert said the American Legion group now plans to send the flags to the Obon Society.

"Just to get these flags back to Japan, and the healing for the families, makes us feel great," said Shubert, a Navy veteran who was once stationed in Japan himself.

Additionally, St. Maries' American Legion Post is named after Lloyd G. McCarter, a St. Maries native and Medal of Honor recipient who fought off 30 Japanese soldiers in the Philippines during the war. Shubert said that gave extra significance to the group's project.

At this point, it's not guaranteed that the flags will be reunited with appropriate family members. The Obon Society said that if their network of archivists and researchers isn't able to glean clues from handwriting on the flags, the items will be returned to Japanese communities.

"Our goal is to find immediate relatives, whenever possible. Otherwise, we can find the local community who will receive the item in the soldier’s memory and preserve it in a community center," said a statement on the non-profit's website.

Both the American Legion and Koelbel call the effort worthwhile, no matter the outcome.

"It's a family member," said Shubert of the flags' significance to Japanese families. "Although [the soldier] is deceased, and his remains are who knows where, the flag returns home, so the son is returning home."

"It's hard for some people to appreciate, but we're all intertwined. And something of this nature really lets you realize how much we are," Koelbel said. "Hopefully it won't be wounds, but it's going to open up a lot of memories that have been laid aside."

The following video is a report on Kootenai County welcoming home a wounded combat veteran.