After losing her job during the COVID-19 pandemic, Treasure Dragseth restarted her art career by building a mobile studio in a bright, purple bus. 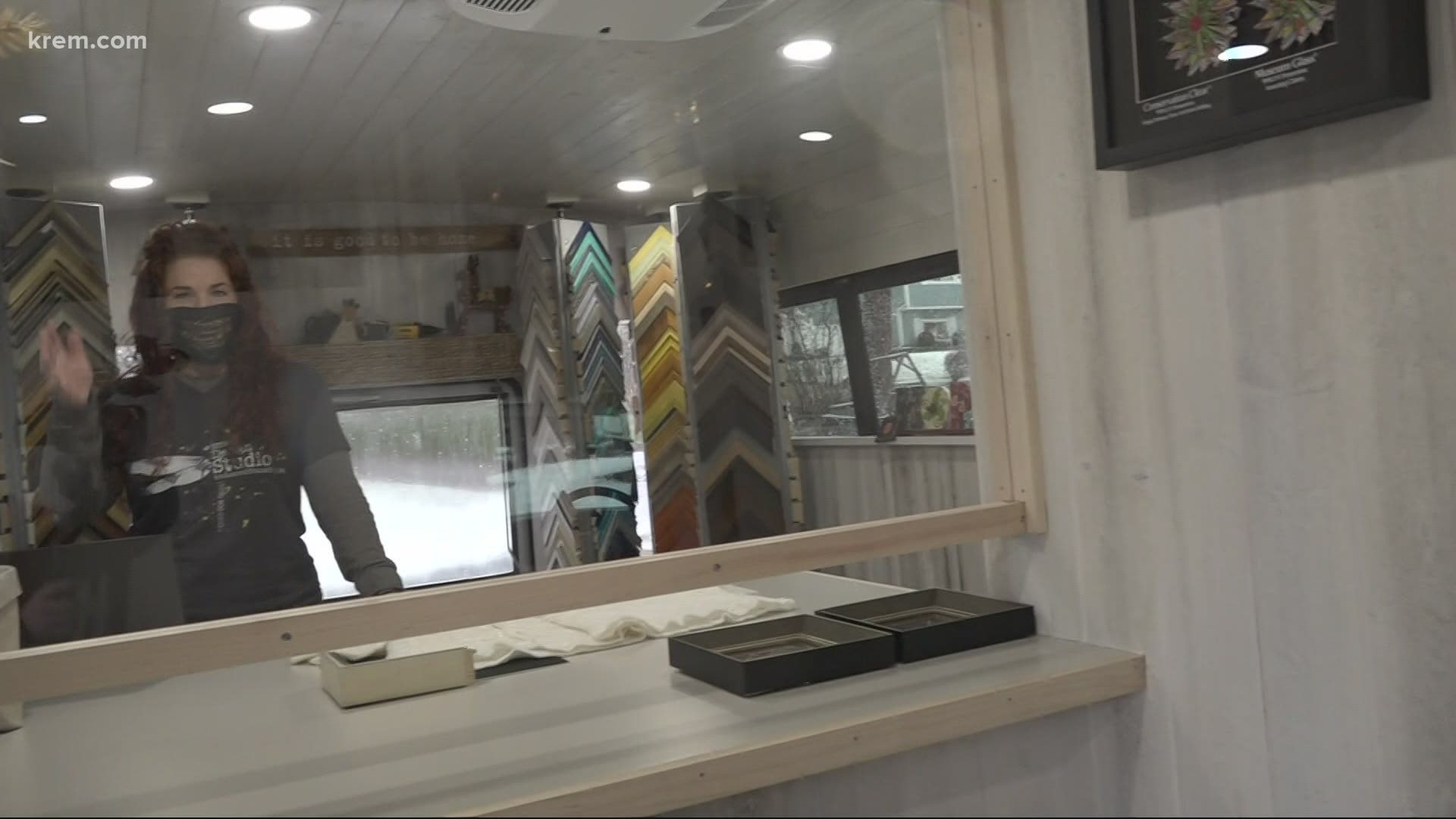 SPOKANE COUNTY, Wash. — When Treasure Dragseth lost her job in a restaurant due to COVID-19, she still considered it "a wash" at first. She was relieved to have her husband home after he lost his own job in Arizona, but that extra comfort didn't take away from the fact that they had no income.

"We had no idea where either of us was going to go next," Dragseth, who lives in Nine Mile Falls, said. "So while we were sitting on unemployment, we decided it was the best time to start a project."

That project, Dragseth said, was an art studio that had weighed on her heart for years called, "Treasure It? Frame It!"

"There's a lot of people who have never even been in a frame shop," Dragseth said. "Now with big box stores and online options, you're quick to slap a frame on it. It doesn't even have to fit right. But it's an art and I think that it actually completes a piece of art."

Dragseth has been an artist for as long as she can remember and a professional picture framer since 1994. She saw the loss of her job as an opportunity to restart her career.

But unlike the studio she'd once owned in Maui, the COVID-19 pandemic made Dragseth hesitant to sign any lease for a brick and mortar building for her studio.

Prompted by an idea from her father in Missoula, Montana, Dragseth started to look into mobile options, giving birth to her new idea: a mobile framing consultation business.

After holding a mobile appointment with a new client, Dragseth planned to drive to the client's home, pick up their art or precious memorabilia that they wanted professionally framed, take the piece back to her home art studio and then return the finished piece to her client.

"It's kind of a fun little dance I do with the client," Dragseth said. "I start pulling samples down, put them back if they don't like them, until we find something they love. I try explaining that it's like another piece of furniture, and I want them to love it, so I want them to get it right the first time."

Dragseth's priority was to create an easy opportunity for people who couldn't leave their home, and to keep themselves safe and socially distanced.

That's what led her to a little yellow bus in Rathdrum, Idaho.

"I jumped on it," Dragseth said with a laugh. "My husband made me sleep on it, and in the morning he was like, 'What do you think? How do you feel?' And I said, 'It feels right. Let's do it!'"

That's when the overhaul began. Dragseth and her husband stripped out the seating, built and painted a beautiful mobile studio, and set up plenty of sturdy walls and windows to keep both Dragseth and her clients well-protected from any exposure to each other, while still being able to communicate in person.

"The thickness of my glass was important to me," she said. "A lot of people have got a thin piece of 1/8-inch plexiglass that just waves in front of you, but I wanted it to be solid and strong and completely separate."

The final touch was the bright blue-purple wrap surrounding the bus, making it easy to identify on any street, or at any fair or festival, once they've safely reopened.

"My parents have always supported me as an artist," Dragseth said. "And when COVID hit, it was doubly influenced by my parents, to cater to those who can't leave their homes, like my parents."

Eventually, Dragseth said, her goal is to bring her completed bus to Missoula to show her dad all of her hard work.