Formerly homeless man inspires at Spokane gym: 'I can come here and better myself'

Sharkey uses a wheelchair, but leaves it now and again to unleash all his energy swinging at a punching bag. 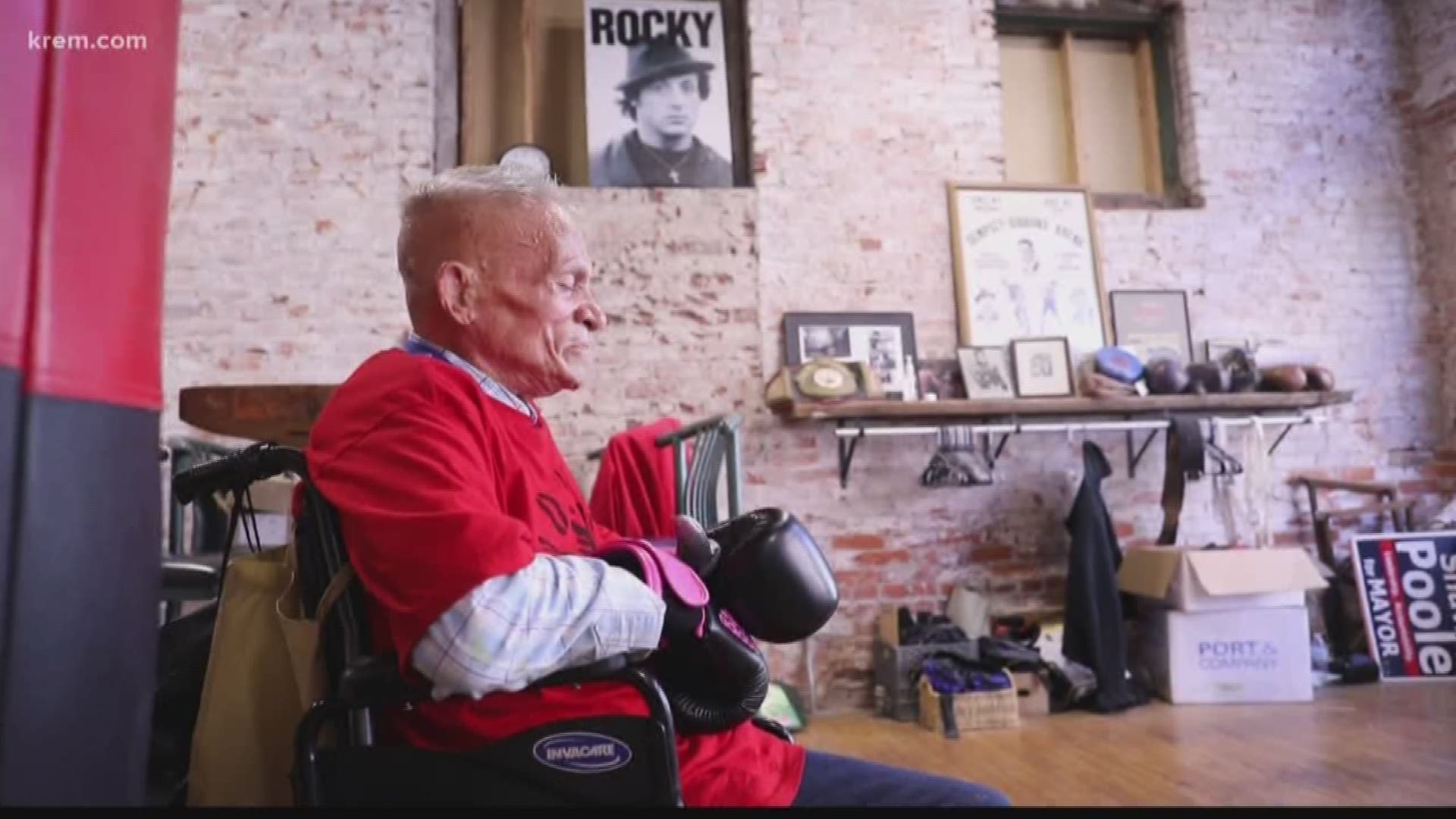 SPOKANE, Wash. — It's the kind of place you just might miss if you're strolling by. But inside Spokane Boxing Gym you'll find a better day in motion.

Welliver weaves in and out of a diverse cast of characters who are busy shadow boxing around the gym.

"How we doing over there?” he asks one.

Some of the people here are building a life without drugs.

While some are in search of long term sobriety, others are simply here to become better boxers. Here, you'll find a 6-year-old training alongside a 64-year-old.

"Well I'm really old and I just want to stop there and try to reverse the process," says a 64-year-old man who goes by Sharkey.

Sharkey is not exactly a star in the boxing ring but his star is rising.

"This is a place to better yourself. A dream that everyone should have that," he said.

Sharkey uses a wheelchair, but leaves it now and again to unleash all his energy swinging at a punching bag. He then shuffles to his wheelchair, sits for a bit, until he has to strength to get up and take more swings.

Welliver said Sharkey appeared several months ago. He was homeless and looking for a place to improve his health.

"He was kind of flying around the neighborhood in his wheelchair and he would stop and talk to us, ask for water or use the restroom and we'd let him and one day he said, 'Can I hit the bags,'” Welliver explained.

Welliver welcomed Sharkey into the gym free of charge six months ago.

"I was homeless and my home was the shelter," said Sharkey.

He was homeless for 18 months and has since found a studio apartment with Catholic Charities.

"He's tried to pay me. I'm not going to take his money,” said Welliver.

Now Sharkey is focused -- not so much on fancy footwork -- but keeping his feet securely beneath him. Welliver said when Sharkey came in, his balance was very poor.

"He started punching the bag and there's been a considerable improvement.  You can see it in the last 6 weeks how much better he's doing," Welliver said.

Sharkey's life has not been easy to say the least. His face is swollen and bruised and he has stitches across his left cheek.

"I asked him what's going on what happened,” said Welliver. "He said that he got attacked."

"I had a lot of blood, but I survived," said Sharkey.

He said he was attacked by a woman with a knife who robbed him.

Sharkey surges ahead with optimism.

"I can come here and better myself. That's the bottom line," he said.

Welliver says Sharkey may not realize it, but when he’s here putting in the work, it drives all the young boxers at the gym.

"How bad is your life if this guy's really doing it?” said Welliver. “If this guy is wheeling himself in a wheelchair is doing it. If he's coming into this gym using our water faucet. How bad is your life? I don't want to hear any excuses. I don't play that precious nonsense. Get up, get going, get started."

This is a man you might not imagine would have a lot to offer up-and-coming fighters, but there's a symbiotic relationship building in this boxing gym.

"Here's an old man he has a hard time moving around, he's in a wheelchair, he gets up and pounds away at that bag with no excuses. Here's young kids that make him feel included, make him feel like he's a part of the gym," said Welliver.

As Welliver helps Sharkey shuffle back to his wheelchair, we’re reminded of the good and hope in all of us.