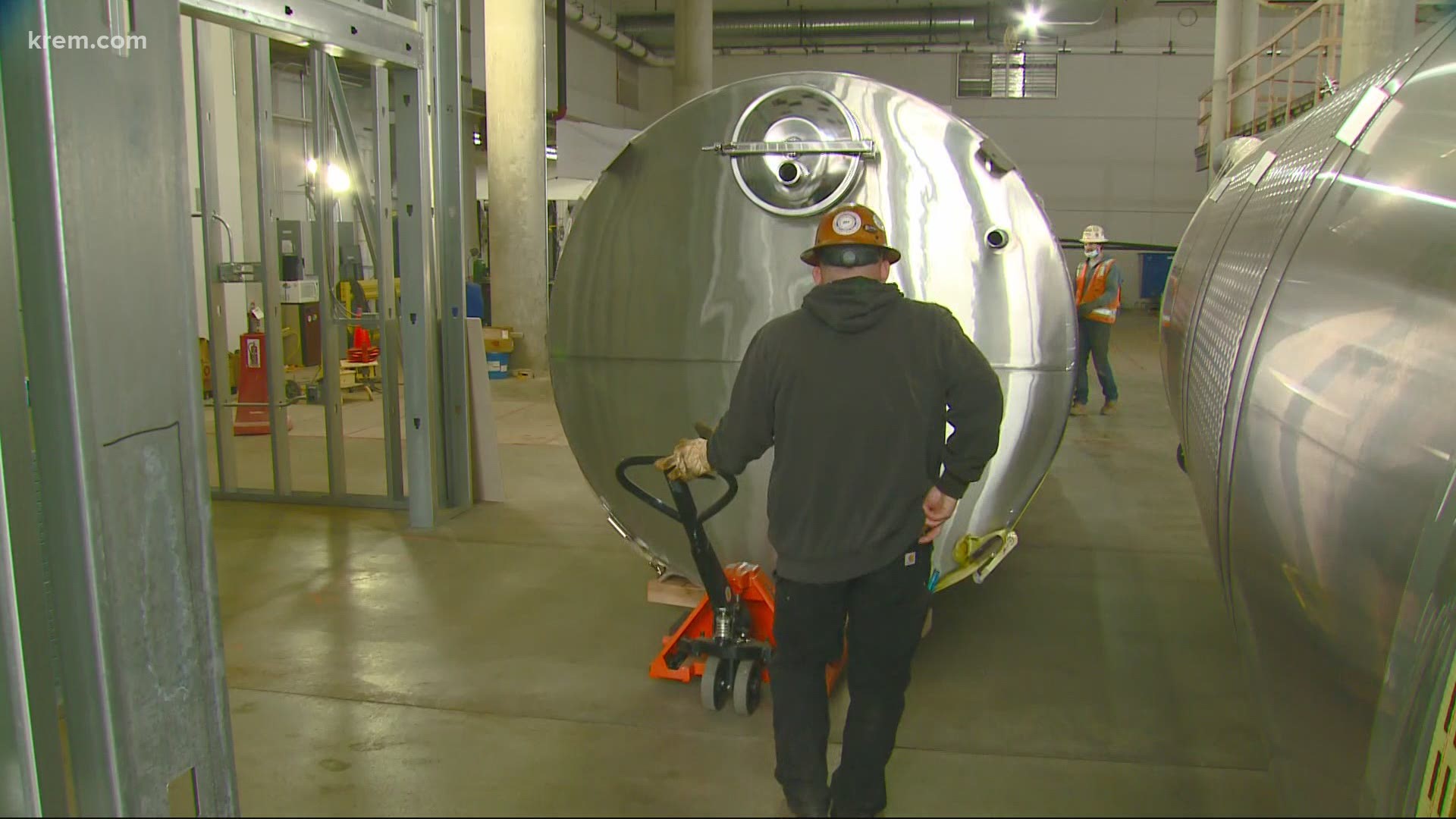 SPOKANE, Wash — Dry Fly Distilling moved some of its equipment on Wednesday to its new building in Downtown Spokane.

Dry Fly leaders said they moved five mixers and five fermenters. Dry Fly President and CEO Don Poffenroth said the 27-foot tanks were purchased about a year ago and were manufactured in Spokane by Spokane Industries. he said the fermentation tanks have a 5,000 gallon capacity.

"So these an average output of one of these tanks would be six or 700 cases of vodka, theoretically, or 10 barrels of whiskey per tank," Poffenroth said.

Eventually, there will be a total of 14 tanks in the building, two of which will be stills from Germany.

"We'll come out about four times our current capacity, some of that will go into barrel lean product," he said.

He said right now, the focus is getting the new equipment in the building. Once it's in place, they'll start working on the tasting room and the kitchen.

Dry Fly currently employs about 17 people. The new space is expected to open up about 25 additional positions focused on retail.

#TIMELAPSE: Slow and steady wins the race 🙌🏻 This is one of the 5 fermentation tanks moving into @dryflydistiller’s new location in downtown #Spokane. @KREM2 pic.twitter.com/S7KxLlWILK

The company announced in September 2020 that it was expanding operations into the former newspaper press building on the corner of North Monroe and Riverside in Downtown Spokane.

"This is an amazing location, it's a unicorn, I call it," Poffenroth said. "So it hits every criteria we could ever imagine. It's in beautiful Downtown Spokane, we can see the river from here. This building was built for manufacturing. And so for us it makes it a perfect spot. And it's just in the walking area where people can come see us so all those criteria make it just an amazing spot."

The space is 16,000 square feet and will a complete retail bottle shop, a full tasting room/restaurant, event space, conference room and office, according to a post on the Dry Fly Facebook page. The company has been posting updates on the renovation since the announcement.

The coronavirus pandemic definitely held up progress progress. But Poffenroth thanks the Spokane community for supporting Dry Fly on this journey.

“We would not be here if weren't for Spokane,” he said. “We are thankful every day."

It's safe to say Spokane is thankful for Dry Fly. The distillery stepped up early on in the pandemic by making hand sanitizer when the community was in short supply.

“We've been given some opportunities because of things that happen this year to just step up and try to help our community,” Poffenroth said. “It's not out of character for Dry Fly to do.”

The next step for its new, and much bigger, location is bringing the new tanks upright.

On Monday, a crane will block part of Monroe and lift each of the tanks up from the outside.

Architect Paul Harrington of South Henry Studios is doing the renovations and it is expected to be complete in the spring of 2021.