The device is allowing Weston Keefe, who can't use his arms or hands, to play with his classmates on the playground. 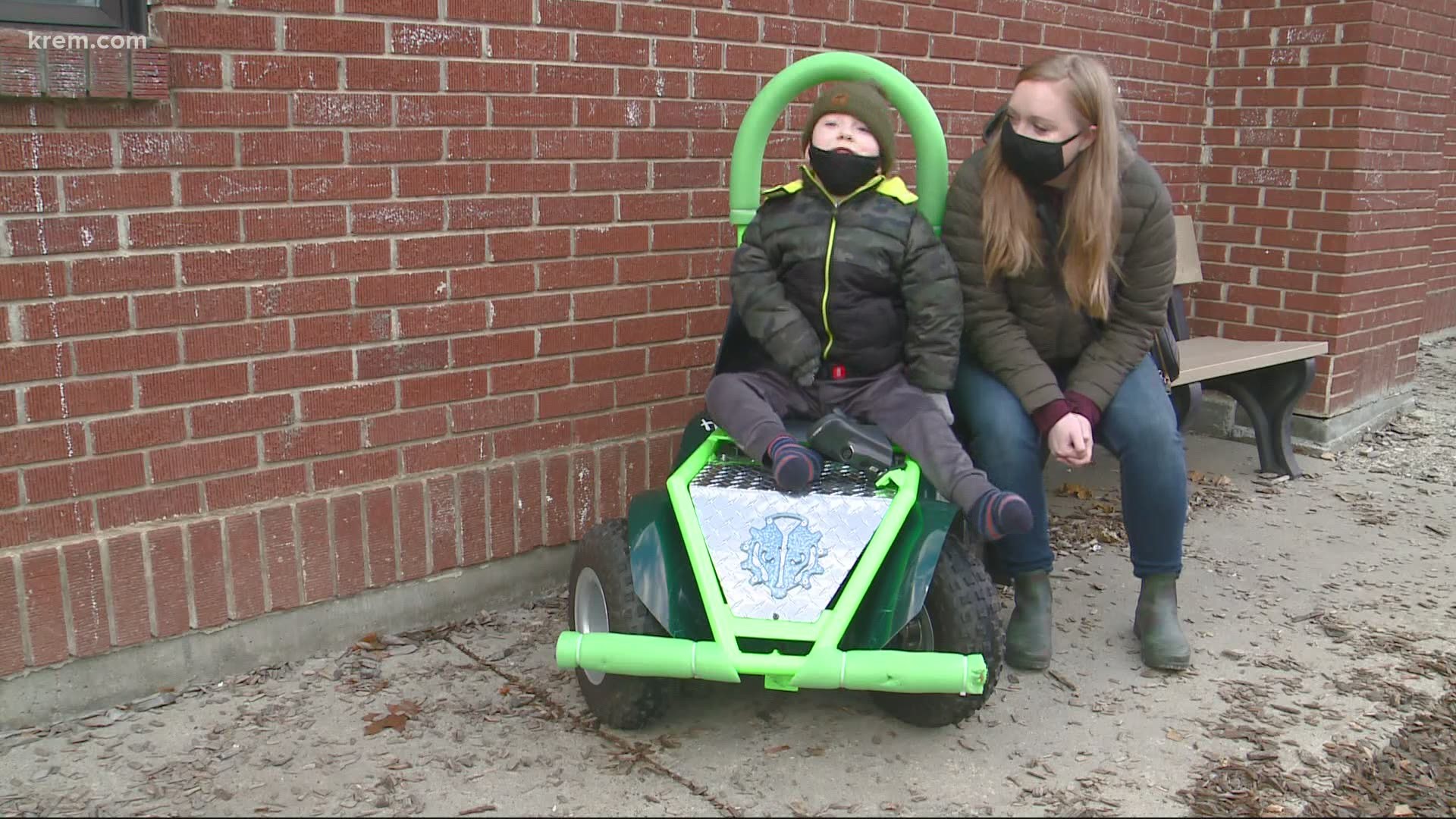 BONNERS FERRY, Idaho — On a brisk Saturday afternoon in Bonners Ferry, local kindergartner Weston Keefe could be seen enjoying his school's playground with a renewed sense of enthusiasm.

"Let's play tag everybody," Weston shouted at the top of his lungs to those around him. "I'm going to catch you!"

Assisting Weston in his mission to dominate the playground was a custom-made four-wheeled mobility device that had been donated to Weston just minutes earlier.

Call it a scooter, call it a wheelchair, or even call it a miniature car. To Weston, the new device represented freedom.

"Did everybody see that?" Weston remarked with vigor to his parents and other grown-ups nearby.

The customized scooter was designed specifically for Weston thanks to the help of the robotics team at Bonners Ferry High School.

Prior to the group gifting the rugged scooter to Weston, the boy's principal had contacted the high school robotics team and asked if they would be able to assist with a unique request. Weston, who isn't able to use his arms or hands, was having trouble playing on the school's playground in his current wheelchair.

According to Traci Schmidt, a physical therapist with the Boundary County School District, Weston's powerchair would get stuck in the playground's woodchips. School staff considered putting rubber mats throughout the playground, but the costs would have been prohibitive.

"He just needs more of an outlet to play more with kids his own age, and to find other ways to play," said Weston's mom Hailey Keefe.

Fortunately for Weston and his teachers, a group of enterprising high school students were willing to help.

"We took it up. We were happy to take it up to do something like that," said Seth Tuma, a sophomore at Bonners Ferry High School and a member of the school's FIRST Team 2130 Alpha+ robotics team.

While the team is traditionally used to building robots for high school competitions, the Alpha+ team and their mentors were excited to take on a new challenge.

"It's different, because, you know, that you're actually doing it to help another person," Tuma explained. "What you're working on, what you're putting all the hours in is going to make a big impact on someone else's life that they'll remember."

Alpha+ was eventually able to secure a small electric scooter through Donor Closet, a Spokane nonprofit that specializes in medical and mobility equipment. After receiving the device earlier this fall, Alpha+ got to work fixing up the scooter to make sure it was fit for Weston.

"We had to go through the whole thing and test all the wires and stuff," Tuma said.

"We got it powder-coated green because that's his favorite color," said Alpha+ member and BFHS senior Regina Claphan.

Notably, the team also repositioned the scooter's controller so that Weston could move the four-wheel drive device using his feet.

"You just are very happy that you're able to do something for someone who deserves it," Claphan said.

Local businesses, including Les Schwab Tires and North Idaho Iron Works, donated services and supplies to the project as well.

When Alpha+ presented the scooter to Weston earlier this month, the boy was all smiles.

"It looks so good," Weston exclaimed to the team members and others in attendance. "Thank you everybody!"

After a very short learning curve that lasted mere seconds, Weston was cruising around the school playground with ease.

"I like to play freeze tag with the robotics team," the boy said during a brief interview.

After answering a couple of questions from a KREM crew, Weston scooted off to keep playing tag.

"I just love seeing him laugh and have fun with it," chuckled Hailey as Weston rode away, cutting the interview short.

For the robotics team, working on Weston's custom scooter also represented a high point during an otherwise disappointing year.

"He was clearly so excited, because he typically doesn't get to do stuff like that on his own. So, it was just really nice,"echoedRegina Claphan.

The Keefe family expressed thanks to the multiple school members and local businesses that contributed to the custom scooter.

"The whole community has just come together and has been so supportive of him and trying to figure out the best ways for him to move and just go about his life," Hailey said.